Skyharbour and Dixie Gold Inc. (“Dixie Gold”) entered into an Option Agreement (the “Agreement”) with Azincourt whereby Azincourt has an earn-in option to acquire a 70% working interest in a portion of the Preston Uranium Project known as the East Preston Property. Under the Agreement, Azincourt has issued common shares and will contribute cash and exploration expenditure consideration totaling up to CAD $3,500,000 in exchange for up to 70% of the applicable property area over three years. Of the $3,500,000 in project consideration, $1,000,000 will be in cash payments to Skyharbour and Dixie Gold, as well as $2,500,000 in exploration expenditures over the three-year period. Skyharbour and Dixie Gold agreed to extend the deadline for the remaining obligations owing to complete the acquisition of a 70% interest in the Project, which include incurring a small portion of the exploration expenditures remaining on the Project and completion of a final cash payment of CAD $400,000 (see News Release dated April 16, 2020). The deadline for these obligations has been extended through until March 31st, 2021 and in consideration for the extension, Azincourt issued 5,000,000 common shares to Skyharbour and Dixie Gold.

The 2020 summer ground geophysical targeting program is currently being planned to support future drill programs based on the existing property-wide heli-borne VTEM survey interpretation and results where numerous untested graphitic conductive corridor trends have been identified for follow up.  The program will consist of helicopter-supported ground geophysical surveys including up to 33-line km of line cutting and Horizontal Loop Electromagnetic (HLEM) and up to 44 line km of ground gravity (Figure 1 – East Preston Summer Geophysical Program Location Map, below).

The planned HLEM survey will identify conductor locations (HLEM) and the ground gravity survey will ideally identify areas of alteration, structural disruption, or thicker overburden due to increased glacial scouring proximal to the conductive trends that are often associated with uranium mineralizing systems. The combined results will be utilized to refine, prioritize, and better locate conductive corridors in these previously untested areas. Bingham Geoscience of Saskatoon continues to oversee Azincourt’s geophysical programs and interpretation work.

It is anticipated that this summer work program will satisfy the CAD $2.5M work commitment obligation in the joint venture, earn-in agreement with Skyharbour Resources and Dixie Gold.  Once the final cash consideration of $400,000 is paid to Skyharbour and Dixie, Azincourt will have earned a 70% interest in the East Preston project.

“The continuing work at East Preston is all about target generation,” said Azincourt’s President and CEO, Alex Klenman.  “It’s no secret the project is already target rich. We have barely scratched the surface in terms of drill testing these areas. We are methodically moving the project forward by adding more critical data.  This is the logical next step before we commence the next drill program.”

The East Preston project lies immediately south of the interpreted southern edge of the Athabasca Basin, and no Athabasca sandstone is present beneath the relatively thin glacial overburden. The HLEM and gravity ground geophysical survey methods proposed are standard techniques used to explore for unconformity uranium deposits in shallow target environments. Permitting for the summer work program is being initiated, with the on-groundwork to be completed in later summer.

A Media Snippet accompanying this announcement is available by clicking on the image or link below: 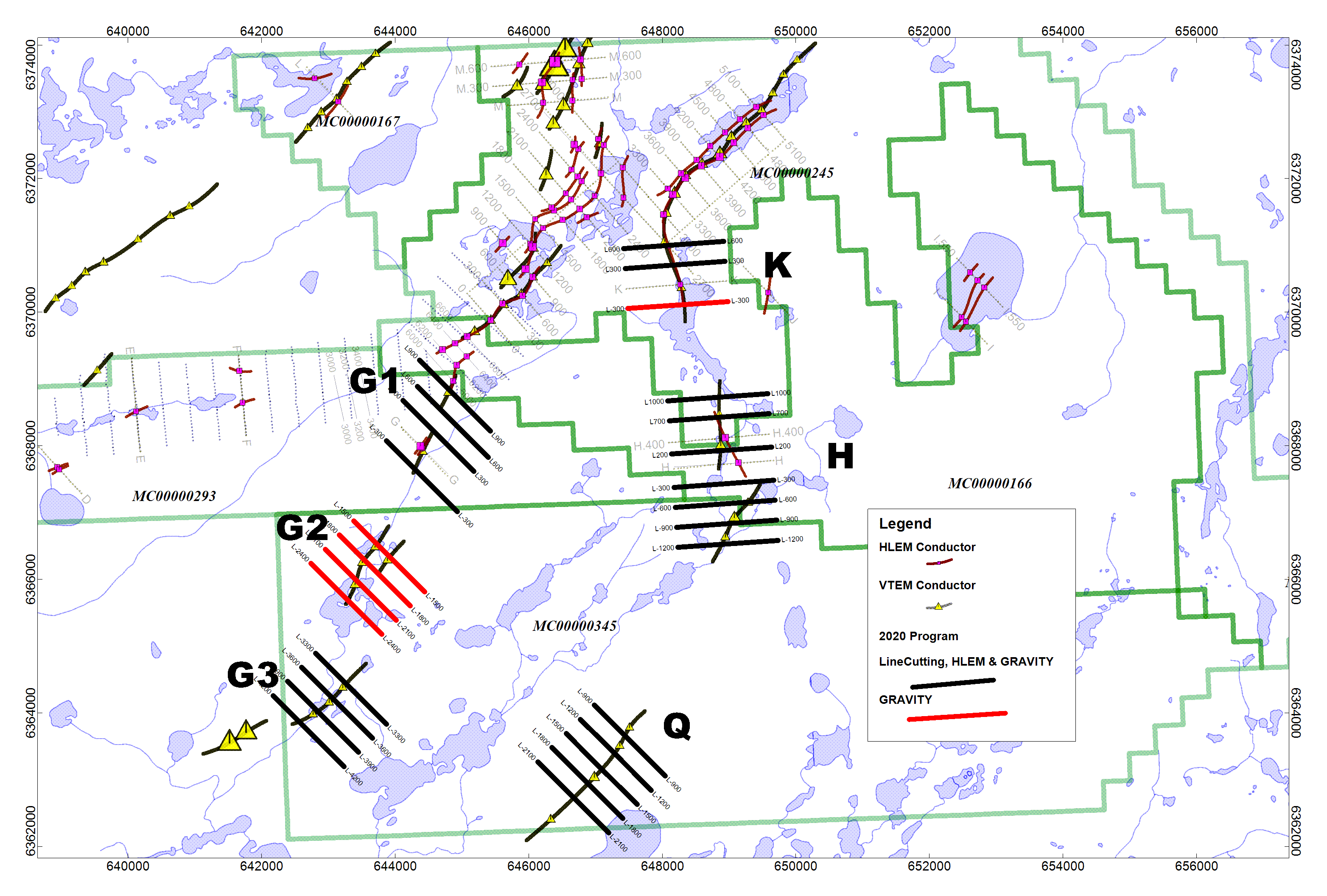 Based on the previously announced drill results and the similar geological and structural setting to the prolific Paterson Lake trend, follow-up and extension drilling has already been recommended for the existing target areas. The planned 2020 summer geophysical program covers prospective conductor trends that have yet to be drill tested. This work will add to the target inventory for future winter drill testing at East Preston.

Extensive regional exploration work at East Preston was completed in 2013-14, including airborne electromagnetic (VTEM), magnetic and radiometric surveys. Three prospective conductive, low magnetic signature corridors have been discovered on the property. The three distinct corridors have a total strike length of over 25 km, each with multiple EM conductor trends identified. Ground prospecting and sampling work completed to date has identified outcrop, soil, biogeochemical and radon anomalies, which are key pathfinder elements for unconformity uranium deposit discovery.

Azincourt completed a winter geophysical exploration program in January-February 2018 that generated a significant amount of new drill targets within the previously untested corridors while refining additional targets near previous drilling along the Swoosh corridor. Ground-truthing work confirmed the airborne conductive trends and more accurately located the conductor axes for future drill testing. The gravity survey identified areas along the conductors with a gravity low signature, which is often associated with alteration, fault/structural disruption and potentially, uranium mineralization. The combination/stacking of positive features has assisted in prioritizing targets.

The Main Grid shows multiple long linear conductors with flexural changes in orientation and offset breaks in the vicinity of interpreted fault lineaments – classic targets for basement-hosted unconformity uranium deposits. These are not just simple basement conductors; they are clearly upgraded/enhanced prospectivity targets because of the structural complexity. The targets are basement-hosted unconformity related uranium deposits similar to NexGen’s Arrow deposit and Cameco’s Eagle Point mine. East Preston is near the southern edge of the western Athabasca Basin, where targets are in a near surface environment without Athabasca sandstone cover – therefore they are relatively shallow targets but can have great depth extent when discovered. The project ground is located along a parallel conductive trend between the PLS-Arrow trend and Cameco’s Centennial deposit (Virgin River-Dufferin Lake trend).

The technical information in this news release has been prepared in accordance with the Canadian regulatory requirements set out in National Instrument 43-101 and reviewed and approved by Richard Kusmirski, P.Geo., M.Sc., Skyharbour's Head Technical Advisor and a Qualified Person.

Skyharbour holds an extensive portfolio of uranium and thorium exploration projects in Canada's Athabasca Basin and is well positioned to benefit from improving uranium market fundamentals with six drill-ready projects. Skyharbour has acquired from Denison Mines, a large strategic shareholder of the Company, a 100% interest in the Moore Uranium Project which is located 15 kilometres east of Denison's Wheeler River project and 39 kilometres south of Cameco's McArthur River uranium mine. Moore is an advanced stage uranium exploration property with high grade uranium mineralization at the Maverick Zone with drill results returning up to 6.0% U3O8 over 5.9 metres including 20.8% U3O8 over 1.5 metres at a vertical depth of 265 metres. Skyharbour has signed option agreements with Orano Canada Inc. and Azincourt Energy whereby Orano and Azincourt can earn in up to 70% of the Preston Project through a combined $9,800,000 in total exploration expenditures, as well as $1,700,000 in total cash payments and Azincourt shares. Preston is a large, geologically prospective property proximal to Fission Uranium's Triple R deposit as well as NexGen Energy's Arrow deposit. The Company also owns a 100% interest in the Falcon Point Uranium Project on the eastern perimeter of the Basin which contains a NI 43-101 inferred resource totaling 7.0 million pounds of U3O8 at 0.03% and 5.3 million pounds of ThO2 at 0.023%. The Company's 100% owned Mann Lake Uranium project on the east side of the Basin is strategically located adjacent to the Mann Lake Joint Venture operated by Cameco, where high-grade uranium mineralization was recently discovered. Skyharbour's goal is to maximize shareholder value through new mineral discoveries, committed long-term partnerships, and the advancement of exploration projects in geopolitically favourable jurisdictions.

To find out more about Skyharbour Resources Ltd. (TSX-V: SYH) visit the Company’s website at www.skyharbourltd.com.

NEITHER THE TSX VENTURE EXCHANGE NOR ITS REGULATION SERVICES PROVIDER ACCEPTS RESPONSIBILITY FOR THE ADEQUACY OR ACCURACY OF THE CONTENT OF THIS NEWS RELEASE.