Millrock President & CEO commented: “Upon completion of the due diligence period, Millrock will be very pleased to enter the contemplated agreement. Under the agreement terms, Millrock will become a significant shareholder of N27 giving great leverage if ore bodies are discovered. The planned US$5,000,000 exploration program for 2020 will provide funds for a thorough test of the compelling drill target we have developed at the West Pogo Block of the project, which is immediately adjacent to the Pogo Gold Mine. N27 shares our view that the Goodpaster Gold District has the potential to become one of the world’s great gold mining camps. As well, over the next two years, at least US$2,000,000 will be devoted to advancing other intriguing prospects we have developed.”

1. Exclusive Legal Due Diligence Period; 50 days, extendable to 100 days
Under the binding terms of the initial agreement, N27 has agreed to pay Millrock US$250,000 within 10 days to secure a 50-day Exclusive Period (“Exclusive Period”) during which N27 may conduct legal due diligence and Millrock will refrain from considering alternate offers. A further payment of US$250,000 (at N27’s election) will extend the Exclusive Period for a further 50 days, to 100 days in total. These funds are to be used by Millrock for the Goodpaster Project, as agreed upon by Millrock and N27, for preparing a drill access road, other exploration activities, and claim rentals. The entire advance payment will contribute to the exploration earn-in expenditure for Year 1, however it is non-refundable. If N27 elects not to enter the contemplated Option to Joint Venture agreement the advance payment will be forfeited.

2. Sole Funding Period
US$20,000,000 exploration expenditures, cash payments, and share payments over four years to earn 60% as laid out in the following table:

N27 may, at its election and after being satisfied with due diligence under the Exclusive Period, enter into the Option to Joint Venture agreement (“Earn-in”). During the Earn-in, in which N27 can earn up to 60% of the project, N27 has agreed to sole fund the activities with the terms as set out in the table above. While N27 is Manager throughout the sole funding period of the project, Millrock’s Alaska subsidiary Millrock Exploration Corp (“MEC”) will act as the Operator in Year 1 with an operator fee of 8% of exploration expenditures. Millrock may be re-appointed as exploration operator each year at N27’s discretion. If MEC ceases to become Operator the annual cash fee payable will double. If N27 fails to reach the Stage 1, a 30% interest, no encumbrances will be recorded over the project by N27. If any party is diluted to less than a 10% equity ownership interest their interest will revert to a 1.0% Net Smelter Returns royalty. N27 may elect to form a Joint Venture (JV) at the completion of any stage and co-funding conditions will commence.

N27 may earn up to 70% by sole funding a BFS study on this one block. The other eight blocks will remain in the original JV according to final interest achieved during the earn-in period and subsequent co-funded JV. Upon a positive BFS and N27’s decision to mine, N27 must pay Millrock US$3,000,000 cash or, subject to shareholder and ASX approval, an equivalent value in N27 shares.

Further, N27 may elect to loan carry Millrock to first production and thereby earn an 80% interest in the project. N27 may opt for a co-funded JV at any time after Stage 1 of the Earn-in has been completed.

4. Grace Period; six months
During the sole funding Earn-in period, N27 has the right to trigger a single “grace period”, allowing for a six-month extension to meet their required minimum expenditure for a particular earn-in stage.

5. Joint Venture (JV) co-funded period
Once a JV is formed, both parties are required to fund according to their percentage interest. A party may voluntarily elect to dilute using a standard industry formula using a 2X weighting on new funding. A penalty dilution of 3X will be imposed on a defaulting party in certain circumstances. Management is by committee with voting according to percentage interest. The party with the largest interest will hold the right to the Manager, in line with standard industry conditions.

6. Area of Interest (“AOI”)
The AOI is depicted on Figure 1. Under terms of the agreement all new properties acquired by N27 in the “AOI” shall be included in the terms of this agreement. N27 has agreed to fund at least US$2,000,000 of exploration expenditures outside of the West Pogo block during the first two years of the Option. After this period, any block not funded will revert to Millrock.

About Millrock Resources Inc.
Millrock Resources Inc. is a premier project generator to the mining industry. Millrock identifies, packages, and operates large-scale projects for joint venture, thereby exposing its shareholders to the benefits of mineral discovery without the usual financial risk taken on by most exploration companies. The company is recognized as the premier generative explorer in Alaska, holds royalty interests in British Columbia, Canada and Sonora State, Mexico and is a significant shareholder of junior explorer ArcWest Exploration Inc. Funding for drilling at Millrock’s exploration projects is primarily provided by its joint venture partners. Business partners of Millrock have included some of the leading names in the mining industry: EMX Royalty, Centerra Gold, First Quantum, Teck, Kinross, Vale, Inmet, Altius, Riverside and PolarX.

Some statements in this news release contain forward-looking information (within the meaning of Canadian securities legislation) including, without limitation, management’s expectation that it will form an exploration agreement after the due diligence period, receive funding from N27, receive permits and be able to install a drill trail during 2019..These statements address future events and conditions and, as such, involve known and unknown risks, uncertainties and other factors which may cause the actual results, performance or achievements to be materially different from any future results, performance or achievements expressed or implied by the statements. Such factors include, without limitation, Millrock’s ability to raise funds needed to perform additional exploration on the claims staked and customary risks of the resource industry.

A photo accompanying this announcement is available at https://www.globenewswire.com/NewsRoom/AttachmentNg/9f85d9e8-2d7a-40a4-9a9d-ffbacc19f75f 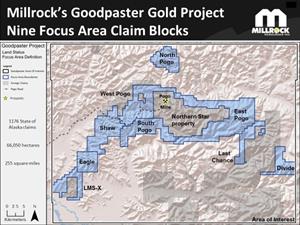