VANCOUVER, British Columbia, Aug. 17, 2020 (GLOBE NEWSWIRE) -- Millrock Resources Inc. (TSX-V: MRO, OTCQB: MLRKF) ("Millrock" or the “Company”) reports that drilling at the Echo Target on the West Pogo block of the 64North gold project in Alaska has now begun. A heliportable drill rig is being used to test a strong CSAMT geophysical survey conductor in the down-dip direction from the nearby Goodpaster gold deposit located on the neighbouring claims held by Northern Star Resources Limited (”Northern Star”). In their August 13, 2020 press release Northern Star has indicated their intention to do definition drilling necessary to calculate an initial resource estimate for their Goodpaster deposit with A$21 million being allocated for the work.

At the Echo Target, the planned depth of hole 20EC005 is 300 meters. Next to be drilled is the Reflection Target. A hole at this location is designed to pierce a CSAMT conductive zone located just above the interpreted location of the same magnetic intrusive rock that hosts the Goodpaster deposit, along a west-northwest trending fault which passes very close to both the Goodpaster deposit and the Pogo Mine. The locations of the completed, progressing and planned holes are shown in Figure 1. Work on the project is being funded by Resolution Minerals Limited (ASX: RML).

A photo accompanying this announcement is available at https://www.globenewswire.com/NewsRoom/AttachmentNg/64509eaf-9253-4b4f-a7c5-284fe4c79754

Millrock also reports that Keith Granberry, Chief Financial Officer (“CFO”) has indicated his intention to resign from Millrock to pursue another opportunity in Alaska. A search for a replacement CFO is underway. Mr. Granberry has expressed his commitment to a smooth transition over the coming weeks. Millrock wishes Mr. Granberry well. Starting as Controller, but then moving to the CFO position rapidly, he has been employed by Millrock for close to a decade.

Millrock President and CEO Gregory Beischer commented: “Keith has been an integral part of the Millrock team and has helped the company grow through the years. We will miss his support and wish him great success in his new career.”

About Millrock Resources Inc.
Millrock Resources Inc. is a premier project generator to the mining industry. Millrock identifies, packages, and operates large-scale projects for joint venture, thereby exposing its shareholders to the benefits of mineral discovery without the usual financial risk taken on by most exploration companies. The company is recognized as the premier generative explorer in Alaska, holds royalty interests in British Columbia, Canada and Sonora State, Mexico and is a significant shareholder of junior explorer ArcWest Exploration Inc. and has a shareholding in Resolution Minerals Limited. Funding for drilling at Millrock’s exploration projects is primarily provided by its joint venture partners. Business partners of Millrock have included some of the leading names in the mining industry: EMX Royalty, Centerra Gold, First Quantum, Teck, Kinross, Vale, Inmet and Altius as well as junior explorers Resolution, Riverside and PolarX.

Some statements in this news release contain forward-looking information (within the meaning of Canadian securities legislation) including, without limitation, management’s plan to drill at the Echo Target and other planned drill holes, and a smooth transition of a replacement CFO. These statements address future events and conditions and, as such, involve known and unknown risks, uncertainties and other factors which may cause the actual results, performance or achievements to be materially different from any future results, performance or achievements expressed or implied by the statements. Such factors include, without limitation, Millrock’s ability to execute the planned surface exploration work and other customary risks of the resource industry, as well as Millrock’s ability to attract an exploration partner on commercial terms considered acceptable to Millrock’s management. 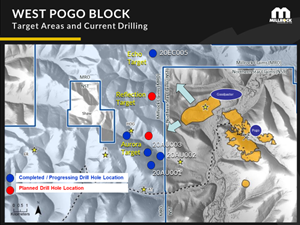