Millrock President & CEO commented: “The proximity to a high-grade mine, and proximity to a new high-grade gold deposit discovery made by our neighbours just on the other side of our mutual claim boundary, along with strong geological, geochemical and geophysical anomalies, make the Aurora target highly compelling.”

64North Gold Project, Goodpaster Mining District, Alaska.
Initial drilling at the Aurora target on the West Pogo Block of the 64North Gold Project is scheduled to begin in early March 2020. The camp and drill rig are presently being mobilized to the Aurora target, located to the immediate west of the Pogo Gold Mine operated by Northern Star. Earn-in partner, Resolution Minerals Ltd., (“Resolution” ASX: RML) is funding the work.

Millrock and Resolution technical teams have collaborated to analyze data and choose the first targets. The initial drilling phase will consist of four holes totaling 2,000 meters and will test the Aurora target. The target area is located within sight and approximately 2.5 to 3.5 kilometers west of Northern Star’s Pogo Mine. Northern Star reports an endowment of approximately 10 million ounces of gold at Pogo. More recently Northern Star has reported discovery of the Goodpaster gold deposit northwest of the mine, even closer to the mutual Millrock – Northern Star claim boundary and the Aurora target. Millrock cautions that mineralization on the nearby Northern Star property is not necessarily indicative of gold mineralization hosted on the Company’s property.

The Aurora target is a 1.5 by 4.0 kilometer long zone of low-magnetic rocks adjacent to a late diorite intrusion. The setting is very similar to that observed at the Pogo Mine. Millrock postulates that the late diorite body intruded along a westerly extension of the Liese Creek fault which is known to have played a key role in the genesis of the Pogo gold deposits. Highly anomalous gold-bismuth-arsenic in soil is documented. High-angle gold-bearing quartz veins have been intersected by prior drilling, however, the few holes drilled by earlier workers did not go deep enough to intersect the low-angle, regional shear zone that is known to host gold at Pogo and the Goodpaster Deposit. Millrock believes this structure exists at the Aurora target. From a recent CSAMT survey, the depth to the shear zone is 150 meters on the east and 450 meters depth on the west end of the Aurora target.

Drilling will begin at the east end of the target and is scheduled to be complete by early April. A second contingent drilling phase in the vicinity of the Half-Ounce-Gulch prospect is tentatively scheduled for May 2020.

The various attributes of the target and the approximate drill hole locations are shown on the following compilation map.

Resolution can earn up to a 60% interest in the 64North Gold Project through exploration expenditures of US$20 million, payment of US$200,000 cash and issuance of 38 million Resolution shares. The minimum commitment for 2020 is US$5.0 million. Other details of the agreement between Millrock and Resolution are documented in Millrock’s announcement made on December 16, 2019.

Stock Option Grant
The Millrock Board of Directors has approved, in accordance with the Company’s stock option plan, a grant of stock options to employees, officers, directors, and advisors of the company. The company has granted a total of 2,430,000 stock options that may be exercised at $0.135 for five years.

About Millrock Resources Inc.
Millrock Resources Inc. is a premier project generator to the mining industry. Millrock identifies, packages, and operates large-scale projects for joint venture, thereby exposing its shareholders to the benefits of mineral discovery without the usual financial risk taken on by most exploration companies. The company is recognized as the premier generative explorer in Alaska, holds royalty interests in British Columbia, Canada, and Sonora State, Mexico and is a significant shareholder of junior explorer ArcWest Exploration Inc. Funding for drilling at Millrock’s exploration projects is primarily provided by its joint venture partners. Business partners of Millrock have included some of the leading names in the mining industry: EMX Royalty, Centerra Gold, First Quantum, Teck, Kinross, Vale, Inmet and, Altius as well as junior explorers Resolution, Riverside and PolarX.

Some statements in this news release contain forward-looking information (within the meaning of Canadian securities legislation) including, without limitation, management’s expectation that drilling will successfully be carried out in the first quarter of 2020. These statements address future events and conditions and, as such, involve known and unknown risks, uncertainties and other factors which may cause the actual results, performance or achievements to be materially different from any future results, performance or achievements expressed or implied by the statements. Such factors include, without limitation, Millrock’s ability to mobilize the drill rig and camp and complete the drilling work and customary risks of the resource industry. 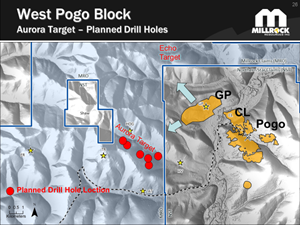