VANCOUVER, British Columbia, March 30, 2020 (GLOBE NEWSWIRE) -- Millrock Resources Inc. (TSX-V: MRO, OTCQB: MLRKF) ("Millrock" or the “Company”), together with its partner Resolution Minerals Ltd., (“Resolution” ASX: RML), has suspended the drilling operation at the Aurora Target of the West Pogo Block at the 64North Project. The move has been made in response to the risk associated with the COVID-19 virus. While the drill crew was completely isolated, and thus in a very safe location for COVID-19 risk, it was the preference of the drilling contractor to stop drilling and allow its personnel to return to their homes and families in the Lower 48 United States before conditions or travel restrictions would prevent their return home from being possible. The drill crew has demobilized and as of 5:00pm on Saturday, March 28, 2020. Alaska’s Governor has issued a “Shelter in Place Order” that restricts travel.

Millrock President & CEO commented: “While it’s disappointing to have to curtail the drilling program, the safety of our people is always paramount. We are very pleased that the first drill hole of the program intersected significant quartz veining with pyrite and arsenopyrite with trace amounts of bismuthinite. These sulfide minerals are often associated with gold in the area and we will await the assay results with great anticipation!”

Hole 20AU-001 was drilled at an azimuth of 145 degrees and a dip of -80 degrees to a depth of 462.4 meters. The entire upper portion of the hole, from first bedrock at 40 meters to approximately 320 meters was mineralized with quartz veins and veinlets with pyrite and arsenopyrite and locally bismuthinite. Alteration is rated as moderate to intense, is pervasive throughout the upper 320 meters of the hole, and consists of silicification and sericite – dolomite alteration. The following highlight mineralized intercept was described by Millrock’s geologist as follows: “from 230.7 meters to 258.9 the core is predominantly composed of strongly altered (silica – sericite – dolomite) gneiss with abundant quartz veinlets with some larger veins and brecciated zones with abundant pyrite and arsenopyrite and with one instance of bismuthinite noted.”

Hole 20AU-002 was drilled at an azimuth of 145 degrees and a dip of -80 degrees. Planned depth was 600 meters. Drilling was suspended by the contractor at 194.4 meters. Initial review of the core indicated abundant quartz veins and veinlets with pyrite and arsenopyrite. The core is now at Millrock’s core logging facility in Fairbanks and will be logged in detail in the coming week. Once conditions allow, the hole will be re-entered and deepened to the planned depth.

Core logging and sampling of the drill core continues. Assay laboratory operations are also continuing. As long as the logging, sampling, and assaying work can continue, it is anticipated that results would be received about four weeks from now.

While drilling operations are suspended, Millrock and Resolution will continue to systematically evaluate regional data sets to select targets areas for follow-up exploration. Numerous targets are emerging across the large 660 square kilometer land package. The team is planning the next logical exploration steps for each prospect and is prioritizing the targets. A continuous pipeline of targets, each with a plan to move them to drill readiness is being formed.

Millrock’s technical and administrative teams are continuing to productively work from their homes. The Company continues to generate gold and copper exploration targets throughout Alaska and plans to make new property acquisitions.

Resolution can earn up to a 60% interest in the 64North Gold Project through exploration expenditures of US$20 million, payment of US$200,000 cash and issuance of 38 million Resolution shares. The minimum commitment for 2020 is US$5.0 million. Other details of the agreement between Millrock and Resolution are documented in Millrock’s announcement made December 16, 2019.

Some statements in this news release contain forward-looking information (within the meaning of Canadian securities legislation) including, without limitation, management’s expectation that drilling will resume in the near future. These statements address future events and conditions and, as such, involve known and unknown risks, uncertainties and other factors which may cause the actual results, performance or achievements to be materially different from any future results, performance or achievements expressed or implied by the statements. Such factors include, without limitation, Millrock’s ability to safely remobilize a drill rig and camp and complete the drilling work while the ongoing COVID-19 virus pandemic risks continue, and customary risks of the resource industry. 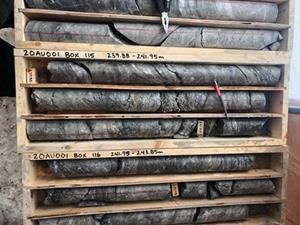 Zone of quartz veining with pyrite and arsenopyrite mineralization. The core drilled was HQ diameter using triple tubes and an oriented core system. Core angles generally indicate that the veins intersected are shallow dipping. However, veins in high-angle structures are also present. There is not enough information yet available to determine whether the drill core intercepts represent true width. 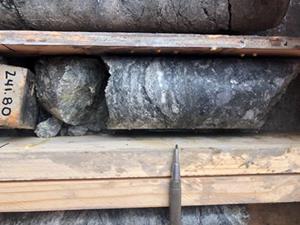 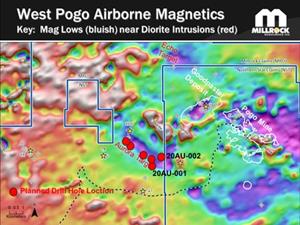