VANCOUVER, British Columbia, July 29, 2020 (GLOBE NEWSWIRE) -- Millrock Resources Inc. (TSX-V: MRO, OTCQB: MLRKF) ("Millrock" or the “Company”) reports that it has secured exclusive rights to two gold exploration projects in the Fairbanks gold mining district in Alaska. These Fairbanks Gold District claim blocks add to Millrock’s existing project portfolio in the Tintina Gold Province, the most prominent of which is the 64North gold project in the Goodpaster District.

Millrock President & CEO commented: “We are pleased to secure these mineral lands near Fairbanks. There is known gold mineralization on both claim blocks and the geology is similar to that present at the nearby Fort Knox gold mine operated by Kinross. The abundance of placer gold mined at surface underscores the potential we see to discover a large intrusion-related gold deposit of similar scale to Fort Knox. High-grade vein deposits are also a possibility. A recent drill intersection by Freegold Ventures Limited at the nearby Golden Summit project has reinvigorated interest in this great gold mining camp. We will advance the two new projects with some surface exploration in the near term and look to bring in a partner as drill targets are firmed up.”

Millrock has secured the mineral rights to the Treasure Creek property through an Exclusive Rights Agreement (“ERA”). Under the ERA, Millrock may, at any time up to September 30, 2021, enter an Option to Purchase Agreement with predetermined business terms. The ERA obligates Millrock to perform adequate assessment work and to pay claim rentals in 2020. Consideration payable to the owners of the property (the Treasure Creek Partnership “TCP”) is 500,000 Millrock shares. The agreement is subject to approval of the TSX Venture Exchange.

The Fairbanks District has produced in excess of 8 million ounces of placer gold and more than 8 million ounces of lode gold production as reported by the Alaska Division of Geological and Geophysical (“DGGS”) surveys. As also documented by DGGS, more than 148,000 ounces of placer gold is reported to have been extracted from valleys that drain the Treasure Creek claim block. Figure 2 shows the location of the Treasure Creek and Ester Dome claim blocks in relation to the Fort Knox gold mine, the past-producing True North Mine, other major prospects, and the City of Fairbanks. Both projects are fully road accessible. The claims cover in excess of 14,000 hectares. The Treasure Creek claims cover the east-trending Scrafford Shear, which hosts numerous gold occurrences.

The Ester Dome project has been the subject of a similar Exclusive Rights Agreement that was executed by Millrock in 2016. Under that agreement, Millrock has kept the Ester Dome claims in good standing in return for the exclusive right to enter an option to purchase agreement with predetermined business terms. The Sheep Creek and Ester Creek placer gold deposits are located in valleys draining from the uplands of the Ester Dome property which is located on the western side of the City of Fairbanks. The former producing Grant Mine and Ryan Lode are located on adjacent properties held by other parties. The exclusive right granted under the agreement is valid until October of 2021.

Capstone Royalty
Millrock has, subject to TSX Venture Exchange approval, agreed to issue 500,000 Millrock shares to Capstone in return for relinquishment and elimination of a royalty on the Sharp, Ster, Par, Cen and PC claim blocks that Millrock purchased from Kiska Metals in 2016. The royalty had been granted to Capstone by a Kiska Metals predecessor company.

About Millrock Resources Inc.
Millrock Resources Inc. is a premier project generator to the mining industry. Millrock identifies, packages, and operates large-scale projects for joint venture, thereby exposing its shareholders to the benefits of mineral discovery without the usual financial risk taken on by most exploration companies. The company is recognized as the premier generative explorer in Alaska, holds royalty interests in British Columbia, Canada and Sonora State, Mexico and is a significant shareholder of junior explorer ArcWest Exploration Inc. and has a shareholding in Resolution Minerals Limited. Funding for drilling at Millrock’s exploration projects is primarily provided by its joint venture partners. Business partners of Millrock have included some of the leading names in the mining industry: EMX Royalty, Centerra Gold, First Quantum, Teck, Kinross, Vale, Inmet and Altius as well as junior explorers Resolution, Riverside and PolarX.

Some statements in this news release contain forward-looking information (within the meaning of Canadian securities legislation) including, without limitation, management’s plan to advance the projects with some surface exploration in the near term and look to bring in a partner as drill targets are firmed up. These statements address future events and conditions and, as such, involve known and unknown risks, uncertainties and other factors which may cause the actual results, performance or achievements to be materially different from any future results, performance or achievements expressed or implied by the statements. Such factors include, without limitation, Millrock’s ability to execute the planned surface exploration work and other customary risks of the resource industry, as well as Millrock’s ability to attract an exploration partner on commercial terms considered acceptable to Millrock’s management.

Photos accompanying this announcement are available at: 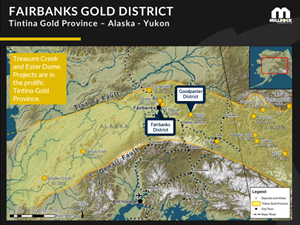 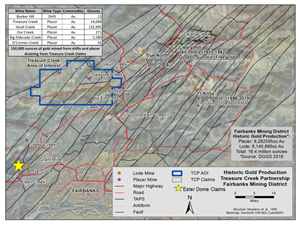