ANCOUVER, BC / ACCESSWIRE / June 10, 2020 / Mawson Resources Limited ("Mawson") or (the "Company") (TSX:MAW(Frankfurt:MXR)(OTC PINK:MWSNF) is pleased to announce results from the final 9 holes from the recent 37 hole, 14.1 kilometre winter drill program at the Company's 100%-owned Rajapalot project in Finland.

Mr. Hudson, Chairman and CEO, states, "The last batch of drill results from our 14.1 kilometre winter program continues to deliver with the thickest as well as the deepest intersections found to date on the project. Geological modelling based on core logging and assaying remains on schedule to deliver an updated resource at Rajapalot at the start of Q3 2020. We are also pleased that exploration programs will recommence shortly in Finland and Australia, with further information to be soon released."

Gold and cobalt assay results from the final nine drill holes from 2020 winter drill program which consisted of 37 drill holes for 14,132 metres (including one wedged drill hole and deepening an existing hole). Specifically, holes released here are from South Palokas prospect (PAL0209, 0219, 0223, 0224, 0229 and 0235), Palokas prospect (PAL0227, 0232) and the Raja prospect (PAL0230). A plan view of the completed drill holes and the locations of drill holes reported here are shown in Figures 1-3 with corresponding collar and assay data in Tables 1-3. Intersections in the plan view (Figure 2) and oblique section in Figure 3 are coloured by AuEq grade to show the higher-grade zones at Palokas and South Palokas. Further results reported here from the South Palokas prospect include PAL0224 which intersected 2.0 metres @ 1.7 g/t gold from 432.0 metres and PAL0229 intersected 0.8 metres @ 1.5 g/t gold, from 537.3 metres.

Assuming a predominant stratabound control, the true thickness of the mineralized interval is interpreted to be approximately 90% of the sampled thickness. Gold-only intersections are reported with a lower-cut of 0.5 g/t gold over a 1 metre width. No upper cut-off was applied. Where cobalt data becomes available, a lower cut of 0.3 g/t AuEq is used, based on modifying the open pit WhittleTM optimized open pit lower cut-off grade of 0.37 g/t AuEq developed for the 2018 resource recalculated to a dollar value per tonne against current averaged gold and cobalt prices (and therefore the 2018 resource cutoff 0.37 g/t AuEq is the same value per tonne as 0.30 g/t AuEq today). Where gold is below detection limit, half the cutoff grade is used in calculating the average grade for an interval and in determining the gold equivalent value.

Up to five diamond drill rigs from the Arctic Drilling Company OY ("ADC") and Kati OY ("Kati") all with water recirculation and drill cuttings collection systems are used in the drill program. Core diameter is NQ2 (50.7 mm). Core recoveries are excellent and average close to 100% in fresh rock. After photographing and logging in Mawson's Rovaniemi facilities, core intervals averaging 1 metre for mineralized samples and 2 metres for barren samples are cut in half at the Geological Survey of Finland (GTK) core facilities in Rovaniemi, Finland. The remaining half core is retained for verification and reference purposes. Analytical samples are transported by commercial transport from site to the CRS Minlab Oy facility in Kempele, Finland. Samples were prepared and analyzed for gold using the PAL1000 technique which involves grinding the sample in steel pots with abrasive media in the presence of cyanide, followed by measuring the gold in solution with flame AAS equipment. Samples for multi-element analysis (including cobalt) are pulped at CRS Minlab, then transported by air to the MSA labs in Vancouver, Canada and analyzed using four acid digest ICP-MS methods. The QA/QC program of Mawson consists of the systematic insertion of certified standards of known gold content, duplicate samples by quartering the core, and blanks the within interpreted mineralized rock. In addition, CRS inserts blanks and standards into the analytical process.

Three-month average gold and cobalt prices have been used to calculate AuEq values according to the following:

The host rocks to the gold and cobalt mineralization comprise sulphides (pyrrhotite>>pyrite) with biotite-muscovite-chlorite schists at South Palokas and Mg-Fe amphibole-biotite-chlorite rocks at Palokas. Veining and fracture fill minerals include pyrrhotite, magnetite and magnetite-pyrrhotite (+/- quartz, tourmaline). Retrograde chlorite after biotite, generations of secondary muscovite ("sericite") and vein-controlled chlorite+/- tourmaline and magnetite are also present. Preliminary hand-held XRF analysis confirms the presence of associated scheelite and molybdenite, the former visible under UV light as tiny veinlets and disseminations. The minerals associated with the gold are clearly post-metamorphic, reduced, and most likely driven by hydrothermal fluids from nearby granitoid intrusions. Chlorite and fine muscovite are regarded as the lowest temperature silicate minerals with gold, structurally controlled in apparent spatial association with quartz and/or K-feldspar veins. Altered rocks enclosing the mineralized package contain locally abundant talc and tourmaline.

All maps have been created within the KKJ3/Finland Uniform Coordinate System (EPSG:2393).

The qualified person for Mawson's Finnish projects, Dr. Nick Cook, President for Mawson and a Fellow of the Australasian Institute of Mining Metallurgy has reviewed and verified the contents of this release.

Mawson Resources Limited is an exploration and development company. Mawson has distinguished itself as a leading Nordic Arctic exploration company with a focus on the flagship Rajapalot gold project in Finland. 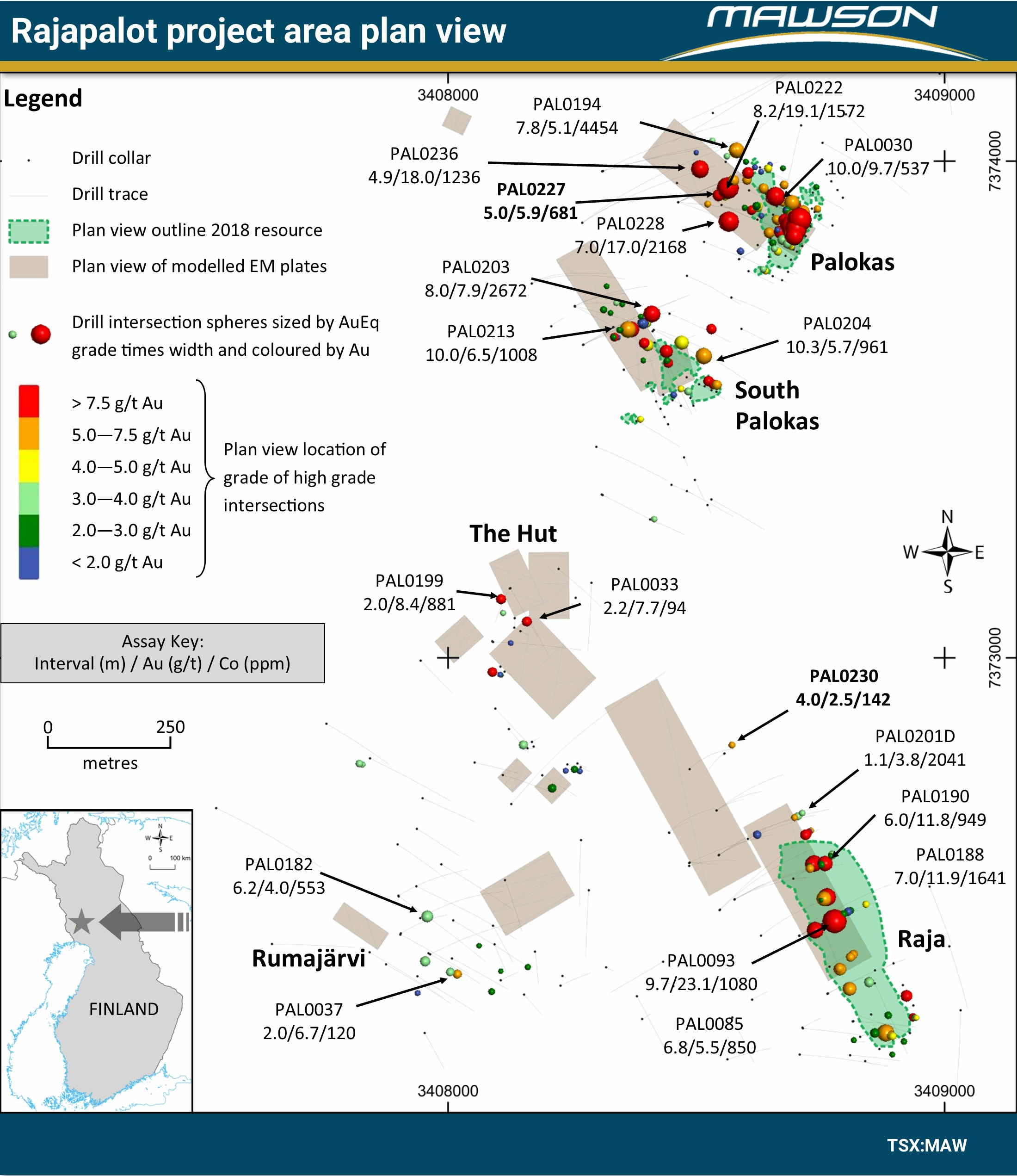 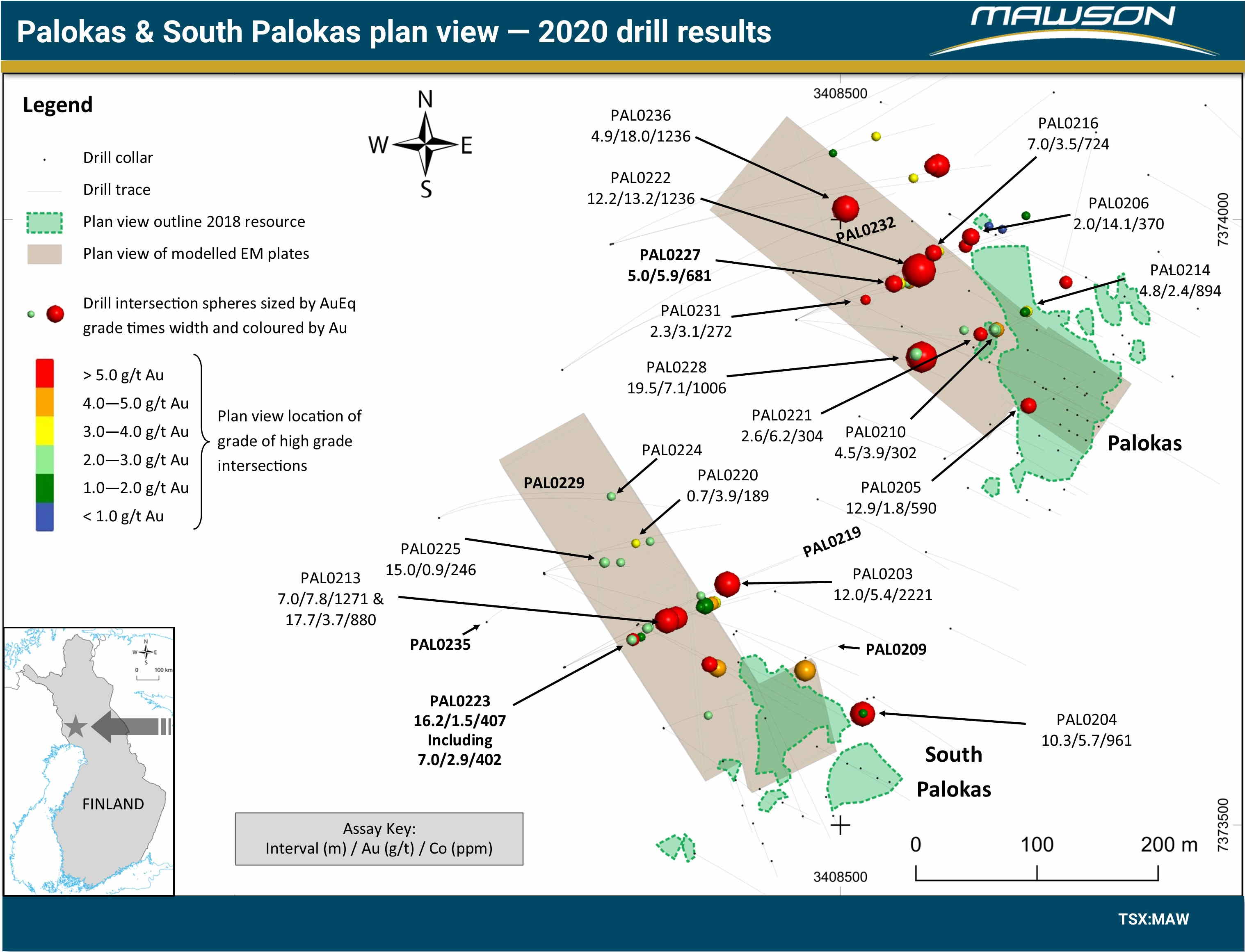 Figure 3: Long section showing outline of 2018 resource (>2 g/t AuEq lower-cut) and significant grade-width intersections (coloured dots) showing new results from holes released here are from South Palokas (PAL0223) and Palokas (PAL0227) prospects extending mineralization beyond the current resource areas (red dashed outlines). The view is looking onto mineralized surface at Palokas and South Palokas (this view is looking at 60 degrees towards 120). The pale shaded area represents the current estimated limits to mineralized rocks, although testing between Palokas and South Palokas is restricted to just four shallow drill holes and there is no testing of the southwestern margin of South Palokas. 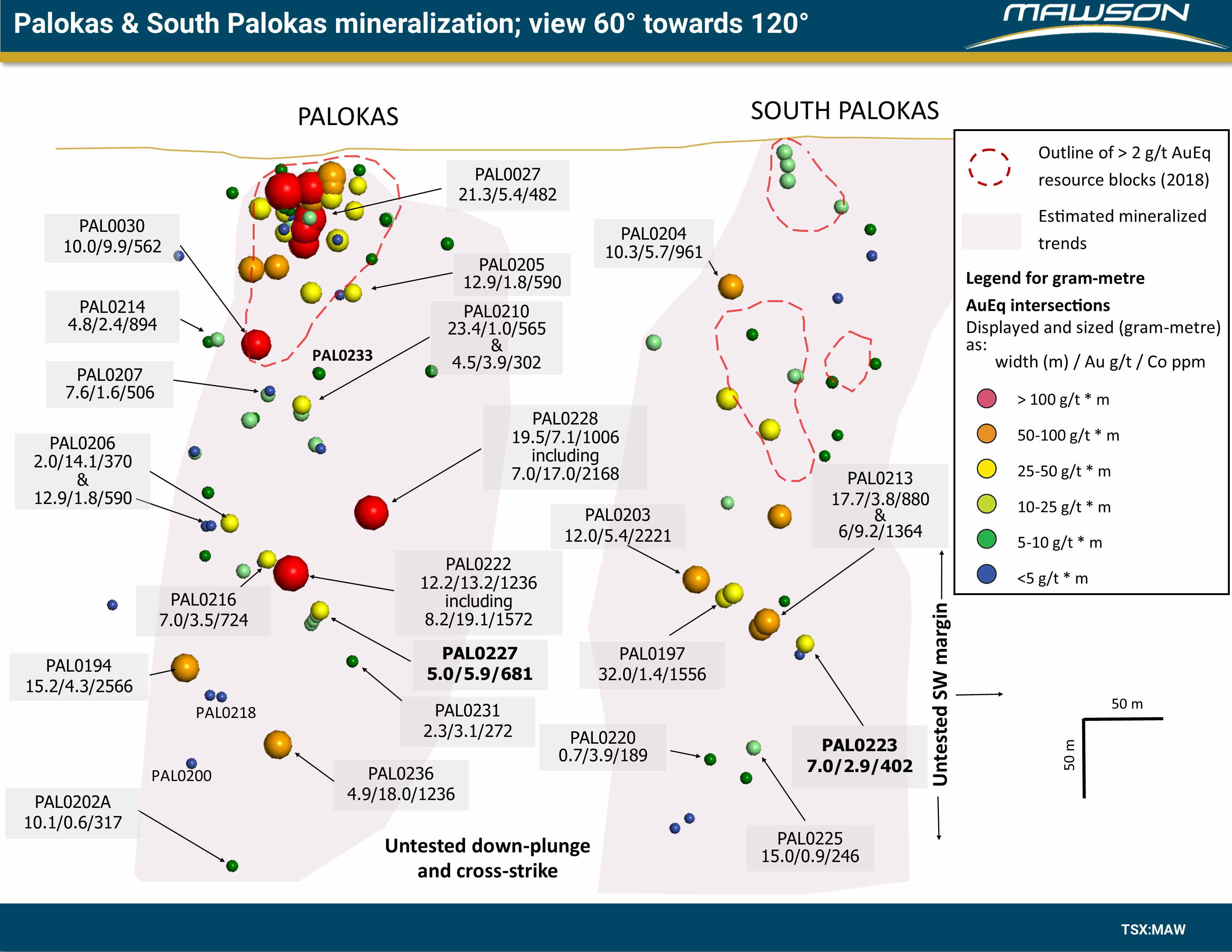 Table 1: Collar Information from 2019-20 Winter drilling at the Rajapalot Project (Finnish Grid, Projection KKJ3; the "A" postscript refers to a daughter hole off the primary hole and the depth range of the drill hole is indicated)

Table 2: Intersections from the 2019-20 Winter Drill Program. Intersections are reported with a lower cut of 0.3g/t AuEq (using updated gold and cobalt prices of $1,580 per ounce and 14.50 per pound respectively) over 1 metre lower cut. No upper cut-off was applied.