May 8, 2019
Field Season Commences at the San Martin Sediment-Hosted Copper-Silver Project in Peru

"San Martin demonstrates the initial makings of a new, large and high-grade sediment-hosted copper and silver discovery in north-central Peru," states Michael Hudson, Chairman and CEO. "Very rarely does a junior exploration company gain a first mover advantage that allows claiming of a district-scale sedimentary copper-silver target over 76 strike kilometres in length. With our new geological synthesis and understanding, we look forward to the 2019 field season which will target mineralization scale, grade and thickness."

Sediment hosted copper-silver mineralization has been discovered over a combined 76 kilometres of strike within a 110 kilometre basin scale trend within the Gera, Tabalosos and Sacanche claim applications. Initial sampling by Hannan late in 2018 outlined four areas of high-grade copper and silver over 15 kilometres of strike within at least two structural corridors within the Tabalosos claim application area. Nineteen grab samples from mineralized float in river beds (>0.1% copper) ranged in grade from 0.1% to 8.3% copper and 0.2 g/t silver to 109 g/t silver with an average grade of 2.8% copper and 27.2 g/t silver.

The field season will last for 5 months. Plans are to collect significant amounts of float, rockchip, channel and stream sediment samples as well as geological mapping over the extensive strike length of the project to demonstrate the scale, width and grade of copper and silver mineralization.

Indigenous land designation covers only a small area (13%) of the Tabalosos application and none is recorded in the Gera and Sacanche application claim areas, which the Company views as positive for future drill permitting. Hannan has begun to identify and involve local stakeholder groups, and will continue to engage with communities and authorities during the 2019 field programs.

The San Martin project lies in the Sub-Andean zone of Andean Cordillera. Since the 1970's the area has principally been explored for petroleum, delivering large seismic datasets.  Seismic-defined basin structures and stratigraphy can now be interpreted in the context of sediment-hosted copper mineralization. Hannan's technical re-evaluation of the geological setting of the San Martin project has identified a new regional geological framework where salt tectonics has played a critical role in the localization of copper mineralization. A similar correlation is seen at giant sediment hosted copper basins such as the Central African Copper Belt.

The San Martin project has undergone a dynamic history. The fundamental control is Triassic-age failed intra-cratonic rifting relating to deposition of the Mitu Formation. This rift basin was likely to have been composed of multiple depocenters and covered an area >1,500 kilometres long and several hundred kilometers wide.  Mitu-aged rocks are best exposed in southern Peru where scattered sediment-hosted copper mineralization has been recorded. A thick salt layer, named the Pareni Salt Formation marks the end of the rifting period.

The Pareni Salt Formation overlies the Mitu Formation. Originally it may have been up to a kilometre thick. It is overlain by the Pucara Group and Sarayaquillo Formation. Salt tectonics is interpreted to have played an important role in depositional and deformational environment of the overlying Triassic-Jurassic Pucara Formation limestone and Sarayaquillo Formation red beds. The latter is believed to be a syn-kinematic unit (deposited during salt flow or other deformation) based on seismic data, where it shows large thickness variations and growth strata.

Sediment-hosted copper mineralization has been extensively found in redox traps of the red bed dominated Sarayaquillo Formation, but other, also unexplored redox traps exist. Rocks of the younger Oriente Group also appear to host the gossanous boulders at Gera South, based on observations by Hannan geologists.

Structures relating to salt tectonics are important and have probably directed metal bearing fluids to migrate upwards to interact with redox traps in the stratigraphy. Due to dissolution of the salt many of these may only be present as salt welds today.  Basin structures, related to the Mitu-aged rifting have been identified and correlate with the eastern and western margins of the Huallaga basin. These structures may also have been reactivated during Jurassic extensional stages and influenced the salt migration that dominated during the period.  Proximity to these basin structures and salt diapirs/ridges are prime targets for sediment-hosted copper mineralization. When compared to the Central African Copper Belt, the Sarayaquillo Formation and Oriente Group hosted targets at the San Martin project corresponds to the stratigraphic and structural sites of Kakanda and Kolwezi copper deposits of the Congolese Copperbelt.

Management of Hannan have had significant prior experience in Peru, which is the world's second largest copper producer, with steady growth predicted over the coming years. The country's copper output is forecast to increase from 2.5 million tonnes ("Mt") in 2018 to 3.8Mt by 2027, averaging 4.7% annual growth. Sediment-hosted deposits are the world's second-most important source of copper accounting for approximately 20% of world production.

Hannan Metals Limited is a natural resources and exploration company developing sustainable and ethical resources of metal needed to meet the transition to a low carbon economy. We currently conduct research in Peru and Ireland. Over the last decade, the team behind Hannan has forged a long and successful record of discovering, financing and advancing mineral projects in Europe and Peru. 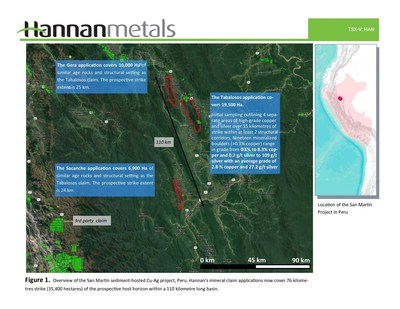