TORONTO, Jan. 2, 2020 /CNW/ - Doré Copper Mining Corp. (the "Corporation" or "Doré Copper") (TSXV: DCMC) is pleased to announce that it has entered into an option agreement to acquire a 100% interest in the Joe Mann gold mine ("Joe Mann") located in Québec. The mine is located approximately 50 km from the Corporation's Copper Rand mill, where mineralized material from Joe Mann was processed from 2004 until its closure in 2007, and is accessible by all season roads. Joe Mann has been privately held since 2008. The Corporation does not currently consider Joe Mann to be a material property for the purposes of National Instrument 43-101.

Ernest Mast, President and CEO of Doré Copper commented, "Joe Mann was closed during a period of low gold prices. This is a rare opportunity to secure a significant high-grade gold underground asset that remains open at depth and along strike with numerous high priority exploration targets. An exploration program at Joe Mann will focus on the significant potential to extend high-grade mineralization at depth as well as defining new zones of mineralization, all accessible from the 3,775-foot shaft (see Figure 1). We believe Joe Mann may demonstrate similar potential to Wesdome's Eagle River, Alamos' Island Gold or Kirkland Lake's Macassa mine where the high-grade gold deposits not only continue at depth but with improved grades while yielding new discoveries. Joe Mann fits into our exploration and development plans, adding another high-grade gold-copper project to our portfolio to leverage our strategically located mill."

Joe Mann operated for 27 of the years between 1956 and 2007, with mineralized material processed at an onsite mill, the Principale mill, and Doré Copper's Copper Rand mill.

Joe Mann consists of 55 mineral titles comprising 1,990.2 hectares of land. Doré Copper already owns 22 claims in the Joe Mann area via its 100% owned subsidiary CBAY Minerals Inc. Four of the 22 claims were recently acquired and are currently being transferred to CBAY Minerals Inc.

Substantial infrastructure remains at Joe Mann with the shaft down to the 3,775-foot level (1,145 meters). Significant potential remains at Joe Mann to extend the mineralization at depth and along strike, including the West Zone and potential new zones to the North and South. Thick, high-grade gold mineralization was encountered at depth between the 2750 level and the 3450 level (see Figure 2). In 2007-2008, after the mine closed, three holes were drilled from underground to test the depth extensions of the mine approximately 170 m below the lowest level (3,450 ft below surface). Hole EE-189B intersected the Main Zone and returned 26.66 g/t Au over 1.8 m and 14.72 g/t Au over 1.2 m. Hole EE-188 intersected the Main Zone, 30.3 g/t Au and 1.3% Cu over 3.02 m and the South Zone, 9.23 g/t Au over 0.91 m. One of the holes did not reach the Main Zone. These drill holes show that the mineralization is still strong and persistent down dip with excellent potential along the entire untested strike at depth. These holes represent the latest drilling results on the property. 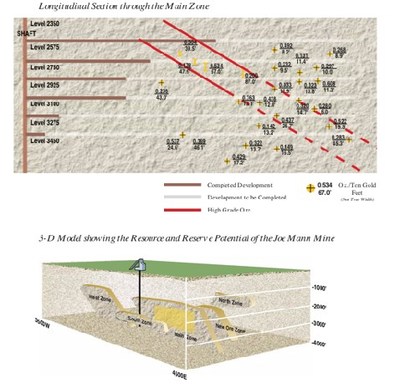 New parallel zones have been identified by recent surface prospecting work that lie just several hundred meters to the south of the main mine.

In 2017 a high resolution airborne magnetic survey was completed and several magnetic anomalies of moderate to strong amplitudes were identified. In addition to Joe Mann being open along strike and at depth, Joe Mann was poorly explored to the south, and the magnetic survey has identified numerous high-priority exploration targets at Joe Mann. 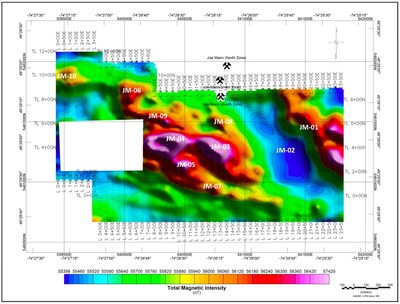 The Corporation has entered into an option agreement with the owners of Joe Mann, Ressources Jessie Inc. ("Ressources Jessie") and Legault Metals Inc. ("Legault"), to acquire a 100% interest in Joe Mann on the following terms:

The terms and conditions of the option agreement are subject to approval from applicable regulatory authorities, including the TSX Venture Exchange.

Andrey Rinta, P.Geo., the Exploration Manager of the Corporation and a "Qualified Person" within the meaning of National Instrument 43-101, has reviewed and approved the technical information contained in this news release.

Doré Copper is engaged in the acquisition, exploration and evaluation of mineral properties. Doré Copper completed a qualifying transaction on December 13, 2019 establishing itself as a copper – gold explorer and developer in the Chibougamau area of Québec, Canada. Doré Copper, through its wholly-owned subsidiary CBAY Minerals Inc., holds a 100% interest in the exploration-stage Corner Bay Project and the exploration-stage Cedar Bay Project, both located in the vicinity of Chibougamau, Québec, as well as the 2,700-tpd Copper Rand mill. Doré Copper has an option to earn a 100% interest in the Joe Mann property.

For further information regarding Doré Copper, please visit the Corporation's website at www.dorecopper.com or refer to Doré Copper's SEDAR filings at www.sedar.com.