VANCOUVER, British Columbia, June 24, 2019 (GLOBE NEWSWIRE) -- Chakana Copper Corp. (TSX-V: PERU; OTCQB: CHKKF; FWB: 1ZX) is pleased to announce that it has commenced its Phase 3 drill program approved for up to 20,000m at the expanded Soledad copper-gold-silver project in central Peru. A total of 25,211m has already been drilled on the project by Chakana.

Phase 3 Drill Program
This 20,000m drill program is designed to both test a variety of targets on the expanded property and to complete additional definition drilling. Based on systematic surface exploration work completed since Phase 2 drilling, a total of 92 targets have been defined and ranked. Targets are categorized as 1) outcropping breccia (n=45), 2) interpreted breccia on the basis of breccia float, geochemistry or geophysics (n=39); and 3) non-breccia for intrusive-hosted mineralization and polymetallic vein occurrences (n=8). Of these targets, 23 are confirmed tourmaline breccia pipes, and 12 are areas with the alteration characteristic of the halo seen proximal to breccia pipes (Figure 1). When additional breccia pipes are drilled with pervasive mineralization like Bx 1, Bx 5 and Bx 6, they will be evaluated for definition drilling.

Drilling will progress based on continued permit approvals in the areas of expanded mineral rights from the original Soledad project area optioned from Condor Resources (see Condor news release dated April 25, 2017). The recently approved permit allows for drilling in the original Condor concession area where drilling on Bx 7 has begun. Subsequent to this, approval will allow drilling further to the south where mineral rights were acquired from a private Peruvian family, and then proceed to the entire southern half of the property where several very attractive targets have been defined.

“The goal of the Phase 3 drill program is to test a number of highly ranked targets and continue definition drilling on Bx 6 and a minimum of 2 additional breccia pipes,” stated David Kelley, President and CEO. “Combined with the definition drilling already completed on Bx 1 and Bx 5, this information will be used in an initial resource estimate. The 92 targets were ranked based on geologic and alteration mapping, rock and soil geochemistry, and geophysical survey results. The highest-ranking targets are those with outcropping mineralized tourmaline breccia, but we know from our previous drilling that blind breccia pipes also occur, so we have to be systematic in our exploration approach to ensure that the full potential of Soledad is tested,” added Kelley.

The order of drilling the targets may change as the program evolves and analytical results are received. Drilling is currently underway with one drill rig; a second rig is on the property and will be deployed as needed. Chakana is fully funded for this 20,000m drill program and planned resource estimate.

Phase 1 and 2 Completed Drill Programs
In Phase 1, 18,600m of definition drilling was completed in 68 holes on breccia pipes 1 and 5. The drill program was expanded beyond the original plan of 16,660m after discovery of a well-mineralized blind breccia pipe adjacent to Bx 1 (see news release dated June 26, 2018 at www.sedar.com). Definition drilling has been completed at Bx 1 down to approximately 450m and at Bx 5 down to approximately 400m. Phase 2 consisted of 6,611m on Bx 3E and Bx 6. Pervasive mineralization was encountered in Bx 1, Bx 5 and Bx 6 and is open at depth. Drilling to date has confirmed the vertical pipe-like geometries, continuity of mineralization, and in the case of Bx 1, areas with higher grade along the pipe’s margins and the increasing size of the pipe with depth. Approximately 2,500m of additional drilling is needed on Bx 6 to complete definition drilling in the upper 400m extent of the breccia pipe. All drilling to date has been by diamond drill core.

Neither TSX Venture Exchange (the “Exchange”) nor its Regulation Services Provider (as that term is defined in the policies of the Exchange) accepts responsibility for the adequacy or accuracy of this release.

A map accompanying this announcement is available at https://www.globenewswire.com/NewsRoom/AttachmentNg/2d64699c-791d-4fdf-9649-c13c0279ff75 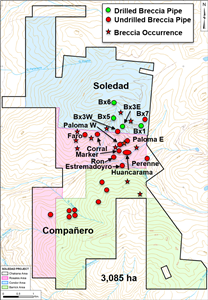