Highlights of the continued analysis include:

"We are very excited to have completed our initial analysis of the Gas Hills Data Set, which has identified significant additional uranium mineralization at the Gas Hills Project and indicates widespread potential to supplement the existing uranium resources. Further, all uranium mineralization identified during the initial analysis occurs in sandstone-hosted roll fronts located below the water table, indicating the potential for ISR amenability. The Gas Hills is a prolific uranium district with approximately 100 million pounds of past production and uranium-focused companies including Cameco Corporation and Ur-Energy Inc. also hold positions in this district. We look forward to completing an updated resource estimate for the Gas Hills Project, which has the potential to transform into a significant satellite deposit for the Company's initial development priority, the Dewey Burdock Project. Utilization of planned infrastructure for the Dewey Burdock Project has the potential to significantly reduce the cost profile of the Gas Hills Project", said John Mays, Chief Operating Officer."

The following table provides a detailed summary of the gamma log readings for the 82 mineralized drill holes that equal or exceed a 0.2 GT cutoff using a 0.02% grade cutoff: 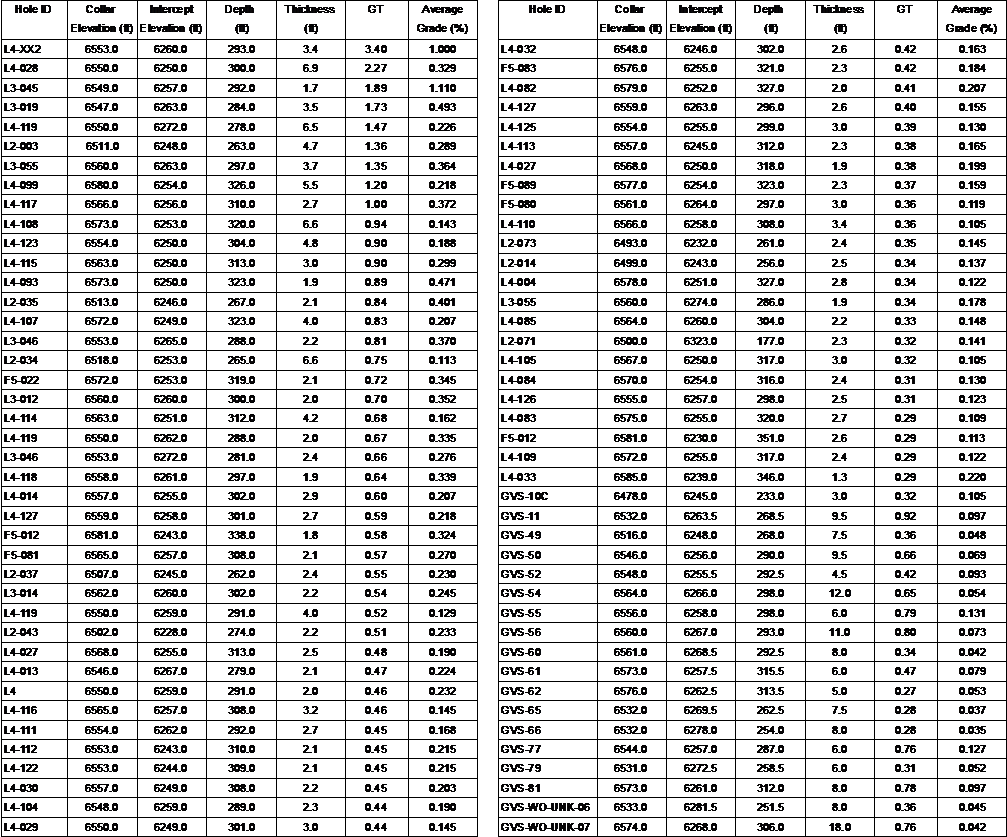 In addition to the gamma log readings detailed above, certain drill holes were also logged by prompt fission neutron equipment ("PFN"). The PFN is a specialized logging tool with neutron activation to determine the uranium concentrations in the drilled holes and can be used to determine the direct content of uranium in the host rocks. The following table provides a detailed summary of the results for the 8 mineralized drill holes also logged by PFN that equal or exceed a 0.2 GT cutoff using a 0.02% grade cutoff:

The technical information in this news release has been prepared in accordance with the Canadian regulatory requirements set out in National Instrument ("NI") 43-101 and was reviewed by John Mays, P.E., Chief Operating Officer for the Company and a Qualified Person under NI 43-101.

The Gas Hills Data Set includes historical drilling information that has been reviewed by the Company's geological team. Also of note, a previous owner of the Gas Hills Project completed certain verification drilling from 2007 to 2013. The Company's review of the records and information within the Gas Hills Data Set reasonably substantiate the validity of this information; however, the Company cannot directly verify the accuracy of the historical data, including the procedures used for sample collection and analysis. Therefore, the Company encourages investors to exercise appropriate caution when evaluating these results.

Please refer to the NI 43-101 technical report prepared by BRS Inc. on the Gas Hills Project titled "Amended and Restated Gas Hills Uranium Project, Mineral Resource and Exploration Target NI 43-101 Technical Report, Fremont and Natrona Counties, Wyoming, USA" with an effective date of June 9, 2017. Exploration targets have been quantified where there is sufficient geological and grade evidence from limited drilling to interpret that mineralization may extend from areas of past production, extensions of defined mineral resources, or based on the limited drilling. The potential quantities and grades of the exploration targets are conceptual in nature and there has been insufficient exploration to define a mineral resource. Furthermore, it is uncertain if additional exploration will result in the target being delineated as a mineral resource.

Azarga Uranium is an integrated uranium exploration and development company that controls ten uranium projects and prospects in the United States of America ("USA") (South Dakota, Wyoming, Utah and Colorado), with a primary focus of developing in-situ recovery uranium projects. The Dewey Burdock in-situ recovery uranium project in South Dakota, USA (the "Dewey Burdock Project"), which is the Company's initial development priority, has received its Nuclear Regulatory Commission License and draft Class III and Class V Underground Injection Control ("UIC") permits from the Environmental Protection Agency (the "EPA") and the Company is in the process of completing other major regulatory permit approvals necessary for the construction of the Dewey Burdock Project, including the final Class III and Class V UIC permits from the EPA.

The TSX has not reviewed and does not accept responsibility for the adequacy or accuracy of the content of this News Release.