VANCOUVER, BC , Feb. 23, 2021 /CNW/ - AUX Resources Corporation (TSXV: AUX) (OTC: AUXRF) is pleased to report the completion of the historic drill hole re-logging and sampling program on the Georgia Project. These results are from previously unsampled diamond drill core by a past operator whose focus had been restricted to high-grade quartz veins. The majority of this historic core was logged, but sampling was restricted to a subset of quartz veins. Forty-six holes were recovered for the program, covering a total of 5,016 metres.

"We are extremely encouraged by the results of our re-logging and sampling program. We were able to recover over 5,000 metres of historic drill core, which was essentially a second drill program, more than doubling the meterage drilled during the 2020 field season," comments Ian Slater , Chief Executive Officer. "We are not only excited about the high-grade gold results generated from this program, but also about the opportunity to fill in some of the gaps in our geological model and improve our understanding of the style of mineralization at Georgia ."

Historic core from exploration programs between 1979 and 1996 was left on site at the Georgia Project and recovered by AUX during the 2020 field season. The majority of this core was unsampled, providing an opportunity to better constrain the extent and geometry of the mineralized zone without drilling additional metres. Of the historic core on site, 5,016 metres was recoverable and was re-boxed and sent to our facility in Stewart at the end of the 2020 field season, where it was then re-logged and sampled in November 2020 .

Table 1. Significant results from 2020 and historic drilling at the SW Vein, Georgia Project (** indicates the hole ended in mineralization; h and r indicate the interval is from historic and re-log, respectively).

Re-logging was completed to refine the stratigraphy and classify the host rocks to the mineralization according to the lithologies used for the 2020 drill program to improve correlations between historic and new drill holes. Sampling was completed for 3 purposes: 1) to sample prospective areas that had not been previously sampled; 2) to sample the shoulders to veins that had been previously sampled; and 3) to confirm results for select veins that had returned anomalous gold grades in the past. Thirty additional samples were collected for detailed petrographic work to better characterize the host rocks and alteration styles associated with mineralization.

Results from the re-logging and sampling program indicate that the mineralization extends up to several metres outside of the veins and the extent of the mineralized zone is consistent along vein strike. These results combined with the results of the 2020 drill program significantly improve the understanding of the orientation and extent of the mineralized zone. In some cases, historic assay results are combined with those from the re-log to increase the length of mineralized zones. For example, quartz veins sampled towards the bottom of hole GR95-06 returned gold grades of 34.5 and 50.8 g/t gold, but the vein shoulders were not previously sampled. Shoulder sampling of this zone during the re-log program produced a 4.4-metre-long zone grading 24.3 g/t gold, which extends mineralization to the end of the hole – the area below this interval remains open at depth.

Mineralization at the Georgia Project was discovered in 1910 and was worked and mined until 1939. Work was centered on the SW Vein, which produced a head grade of 22.6 g/t gold. Historic mine operations were focused approximately 150 metres SSW of the high-grade zone intersected during 2020 drilling (the "Georgia Zone"). One adit extends north from the main mine operations but ends approximately 10 metres into the Georgia Zone. The zone that has been targeted through drilling and exploration after mining operations ceased (including the 2020 drill program) has produced significantly higher grades than what was extracted at the historic Georgia Mine. 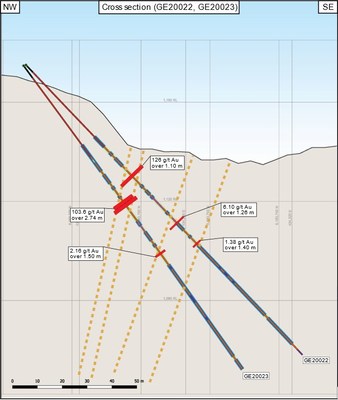 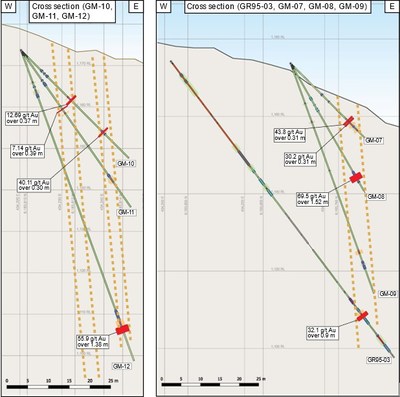 Samples were analyzed at MSALABS in Langley, Canada (an ISO 9001 accredited facility). The sampling program was conducted by the geological team under the supervision of Dr. Craig Stewart , Exploration Manager. A secure chain of custody was maintained in transporting and storing samples. Gold was assayed using fire assay with atomic absorption spectrometry and gravimetric finish when required (i.e., >9 g/t gold). Analysis by four acid digestion with 48 element ICP-MS analysis was conducted on all samples with silver and base metal overlimits being re-analyzed by emission spectrometry.

AUX holds more than 27,000 hectares of strategic claims in the Stewart Mining Camp in the Golden Triangle of British Columbia , which is among the world's most prolific mineralized districts, including the high-grade gold Georgia Project centred on the past-producing Georgia River Mine. The Georgia River Mine, which last operated in 1939 with a head grade of 22.6 g/t gold, contains 1.2 kilometres of underground access on three levels. AUX is actively consolidating the Stewart Mining Camp.

The technical disclosures in this release have been read and approved by Dr. Thomas Mumford , Ph.D., P.Geo., a qualified person as defined in National Instrument 43-101.