Vancouver, British Columbia--(Newsfile Corp. - November 12, 2019) - ALX Uranium Corp. (TSXV: AL) (FSE: 6LLN) (OTC: ALXEF) ("ALX" or the "Company") is pleased to announce it has received initial analytical results from a reconnaissance prospecting program at its 100% owned Falcon Nickel Project ("Falcon", or the "Project") located in the northern Athabasca region of Saskatchewan, Canada. Three grab samples taken from historical trenches were analyzed on a rush basis and returned values of up to 3.13% nickel and 0.367% copper, along with anomalous values of cobalt. A total of 23 additional rock samples and 45 soil samples were collected and submitted for analysis with results expected in two to four weeks.

"Falcon shows the potential to host world-class magmatic nickel-copper-cobalt deposits, yet the property was only sporadically explored over the last half century," said Warren Stanyer, CEO and Chairman of ALX. "During our first visit to the property we confirmed the fertility of the Project for nickel, copper and cobalt mineralization associated with anomalous values of gold, platinum and palladium. The next step at Falcon is to locate a potentially higher grade source area for the abundant mineralization found near surface."

In October 2019, ALX carried out a site visit with two objectives: (1) to sample historical trenches at the Currie Lake nickel-copper-cobalt deposit, known for its higher grades of nickel, and (2) ground truthing of certain geophysical anomalies identified in a 2005 airborne survey that were never followed up. Rock samples containing up to 50 to 60% sulphides were collected from several historical trenches. Three of the rock samples were submitted on a rush basis to SRC Geoanalytlcal Laboratories in Saskatoon, SK, and returned the following values: 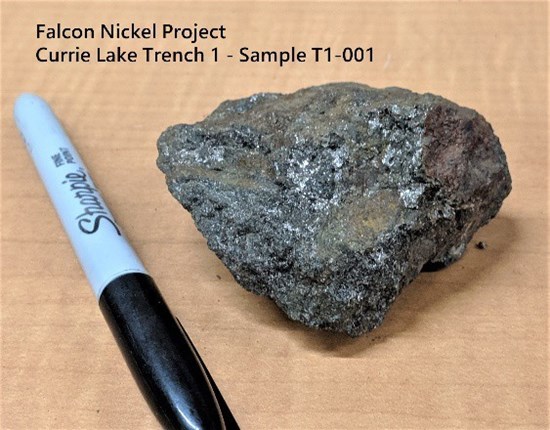 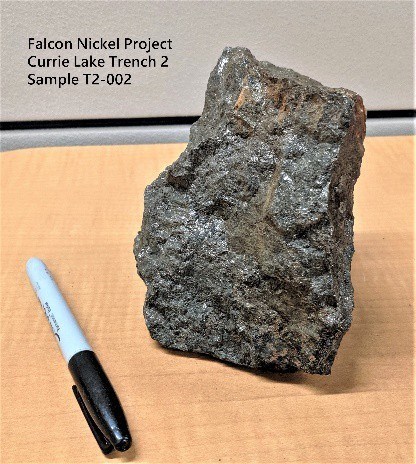 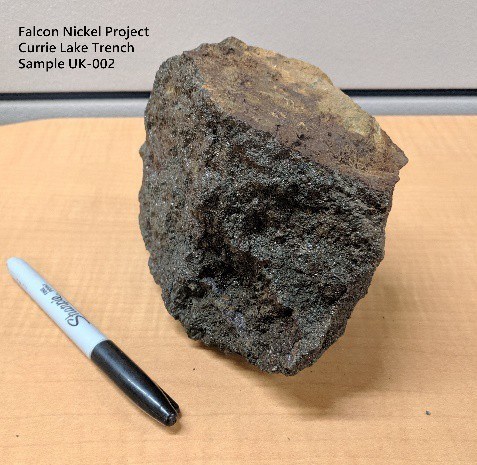 East of Currie Lake, a total of 45 soil samples were collected from a reconnaissance grid over the surface trace of a high-priority airborne conductor and were submitted for dual Spaciotemporal Geochemical Hydrocarbons ("SGH") and ionic leach analyses. This survey represents ALX's first test of the SGH process, which is reported to detect buried mineralization at depths up to 500 metres. Rock samples were also collected from the interpreted strike areas of three other high-priority airborne anomalies.

ALX has engaged Condor Consulting, Inc. of Lakewood, Colorado ("Condor") to perform a detailed interpretation of historical digital data from three airborne surveys flown over the Falcon area between 1991 and 2008. Condor is recognized internationally as expert in the field of airborne electromagnetics, and its final report on the results of the historical airborne surveys is pending. ALX has also produced a preliminary 3D geologic model for Falcon, which is being expanded to better understand the controls on the known zones of nickel-copper-cobalt mineralization hosted by the Project.

About the Falcon Nickel Project

The centre of Falcon is located approximately 14 kilometres (8.7 miles) northwest of Stony Rapids, Saskatchewan within the Tantato Domain, which forms a segment of the Snowbird Tectonic Zone. A long history of exploration beginning in 1929 discovered numerous nickel-copper-cobalt showings within Falcon's boundaries, including the Axis Lake deposit ("Axis Lake"), the Rea Lake deposit ("Rea Lake") and the Currie Lake deposit ("Currie Lake").

Axis Lake is the most significant nickel-copper-cobalt deposit within the Falcon area and was the subject of historical mineral resource estimates variously reported as:

The technical information in this news release has been reviewed and approved by Sierd Eriks, P.Geo., President and Chief Geologist of ALX, who is a Qualified Person in accordance with the Canadian regulatory requirements set out in NI 43-101. Readers are cautioned that the technical information described in this news release is historical in nature; however, the information is deemed credible and was produced by professional geologists in the years discussed.

Rock samples described in this news release were shipped to SRC Geoanalytical Laboratories in Saskatoon, SK and assayed for base metals by HCl:HNO3 digestion, plus gold and platinum group metals by fire assay with a mass spectrometer finish.

ALX's mandate is to provide shareholders with multiple opportunities for discovery by exploring a portfolio of prospective mineral properties in northern Saskatchewan, Canada, a superior mining jurisdiction. The Company executes well-designed exploration programs using the latest technologies and has interests in over 200,000 hectares in Saskatchewan, a Province which hosts the richest uranium deposits in the world, a producing gold mine, and demonstrates potential for economic base metals deposits. ALX has recently acquired the Vixen Gold Project in the historic Red Lake Mining District of Ontario, Canada, and the Draco VMS Project in Norway. ALX is based in Vancouver, BC, Canada and its common shares are listed on the TSX Venture Exchange under the symbol "AL", on the Frankfurt Stock Exchange under the symbol "6LLN" and in the United States OTC market under the symbol "ALXEF". Technical reports are available on SEDAR at www.sedar.com for several of the Company's active properties.

Statements in this document which are not purely historical are forward-looking statements, including any statements regarding beliefs, plans, expectations or intentions regarding the future. Forward-looking statements in this news release include: the Falcon Nickel Project ("Falcon") is prospective for nickel-copper-cobalt mineralization; the Company's plans to undertake exploration activities at Falcon, and expend funds on Falcon. It is important to note that the Company's actual business outcomes and exploration results could differ materially from those in such forward-looking statements. Risks and uncertainties include that ALX may not be able to fully finance exploration at Falcon, including drilling; our initial findings at Falcon may prove to be unworthy of further expenditure; commodity prices may not support exploration expenditures at Falcon; and economic, competitive, governmental, societal, environmental and technological factors may affect the Company's operations, markets, products and share price. Even if we explore and develop the Falcon project, and even if nickel-copper-cobalt or other metals or minerals are discovered in quantity, the project may not be commercially viable. Additional risk factors are discussed in the Company's Management Discussion and Analysis for the Six Months Ended June 30, 2019, which is available under the Company's SEDAR profile at www.sedar.com. Except as required by law, we will not update these forward-looking statement risk factors.

To view the source version of this press release, please visit https://www.newsfilecorp.com/release/49588