ALX's initial 2020 prospecting program was halted by a major forest fire in August 2020. The follow-up Phase 2 program in October 2020 was designed to continue geological mapping and sampling at Vixen within important geological trends that indicate the presence of iron formation-hosted gold occurrences (see ALX news release dated September 9, 2020). An additional 85 samples were taken during mapping work focused on two areas of Vixen North: the Vulpin Zone and the Dickenson Zone. 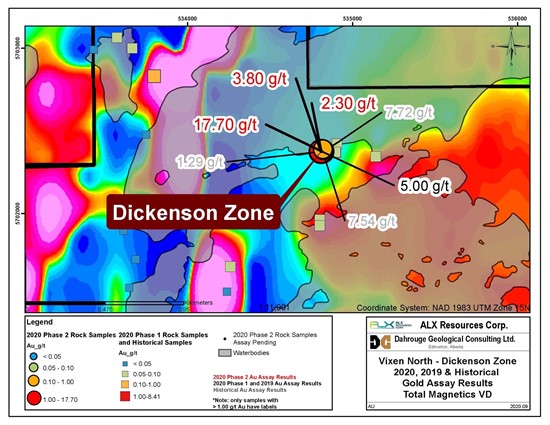 To view an enhanced version of this map, please visit:
https://orders.newsfilecorp.com/files/3046/67074_alxfigure1enhanced.jpg 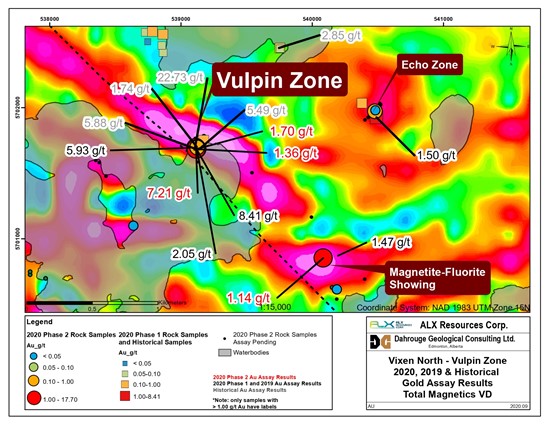 To view an enhanced version of map, please visit:
https://orders.newsfilecorp.com/files/3046/67074_alxfigure2enhanced.jpg

ALX is currently planning a winter drilling program at Vixen based upon the geochemical and geophysical results received to date, and intends to submit a permit application to the Government of Ontario and consult with local communities in November 2020.

About ALX's Exploration at Vixen

During the Phase 1 2020 Program, gold occurrences were found within gossanous and magnetite-bearing host rocks, leading to the possibility of banded iron formation ("BIF") gold deposits at Vixen, a gold deposit model which has not been historically sought after in the Vixen area. However, the Springpole Gold deposit1 (owned by First Mining Gold Corp.) located six kilometres to the south of Vixen North demonstrates the influence of NNW-trending BIF for hosting gold mineralization confirmed by both surface mapping and the detection of strong magnetic high anomalies observed in a 2004 aeromagnetic survey2.At Springpole, strong evidence exists that gold and associated fluorite mineralization is genetically related to the high-level emplacement of a large, alkaline porphyry intrusive and breccia pipe complex ("APB")3. ALX is currently reviewing the interpreted iron formation and fluorite occurrences at Vixen North to evaluate the presence of an APB gold mineralization model at the Project.

To date, the Red Lake Mining District ("Red Lake") has produced over 28 million ounces of gold since mines began production in 1925 (readers are cautioned that mineralization present on adjacent properties may not be present at Vixen). Historic gold mines in the Red Lake camp include the Campbell mine, the Red Lake mine, and the Couchenour-Williams mine, all multi-million ounce gold producers. Vixen lies within the Birch-Uchi greenstone belt, a geological trend located to the northeast of Red Lake that hosts numerous historical gold mines and showings and is highly-prospective for new showings of gold mineralization. The Argosy Mine, located approximately 2.0 kilometres from the Vixen North claim boundary, produced approximately 102,000 ounces of gold from 1934 to 1952. The Springpole Gold Project, operated by First Mining Gold Corp., is located approximately 6.0 kilometres from the Vixen North boundary.

The technical information in this news release was reviewed and approved by Sierd Eriks, P. Geo., President and Chief Geologist of the Company, who is a Qualified Person in accordance with the Canadian regulatory requirements set out in National Instrument 43-101. Readers are cautioned that some of the technical information described in this news release is historical in nature; however, the information is deemed credible and was produced by professional geologists of the eras discussed. ALX cautions investors that it has reviewed but has not verified all of the historical Vixen exploration data. Management further cautions that past results or discoveries on proximate land are not necessarily indicative of the results that may be achieved at Vixen.

ALX's mandate is to provide shareholders with multiple opportunities for discovery by exploring a portfolio of prospective mineral properties, which include gold, nickel-copper-cobalt and uranium projects. The Company uses the latest exploration technologies and holds interests in over 200,000 hectares of prospective lands in Saskatchewan, a stable Canadian jurisdiction that hosts the highest-grade uranium mines in the world, a producing gold mine, and production from base metals mines, both current and historical.

ALX owns 100% interests in the Firebird Nickel Project (now under option to Rio Tinto Exploration Canada, who can earn up to an 80% interest), Flying Vee and Sceptre Gold projects in northern Saskatchewan, the Vixen Gold Project in the historic Red Lake Mining District of Ontario, Canada, and the Draco VMS Project in Norway. ALX holds interests in a number of uranium exploration properties in northern Saskatchewan, including a 20% interest in the Hook-Carter Uranium Project, with Denison Mines Corp. (80% interest) operating exploration since 2016.

For more information about the Company, please visit the ALX corporate website at www.alxresources.com or contact Roger Leschuk, Manager, Corporate Communications at: PH: 604.629.0293 or Toll-Free: 866.629.8368, or by email: rleschuk@alxresources.com.

Statements in this document which are not purely historical are forward-looking statements, including any statements regarding beliefs, plans, expectations or intentions regarding the future. Forward-looking statements in this news release include the Vixen Gold Project ("Vixen") is prospective for gold, the Company's plans to undertake exploration activities at the Vixen and expend funds on Vixen. It is important to note that the Company's actual business outcomes and exploration results could differ materially from those in such forward-looking statements. Risks and uncertainties include that ALX may not be able to fully finance exploration at Vixen, including drilling; our initial findings at Vixen may prove to be unworthy of further expenditure; commodity prices may not support exploration expenditures at Vixen; and economic, competitive, governmental, environmental and technological factors may affect the Company's operations, markets, products and share price. Even if we explore and develop Vixen, and even if gold or other metals or minerals are discovered in quantity, the project may not be commercially viable. Additional risk factors are discussed in the Company's Management Discussion and Analysis for the Six Months Ended June 30, 2020, which is available under Company's SEDAR profile at www.sedar.com. Except as required by law, we will not update these forward-looking statement risk factors.

To view the source version of this press release, please visit https://www.newsfilecorp.com/release/67074