Why 'Peak Lithium' Is An Irrational Fear

Even ignoring the pop-up ads for lithium producers, serious observers have expressed concerns about the adequacy of those resources. For one thing, the booming demand for lithium-ion batteries for electric vehicles and backup power systems (from household level to utility-scale) has caused some to worry whether the lack of lithium resources will constrain efforts to electrify the economy. Both neo-Malthusians and opponents of electric vehicles appear to have seized on this issue for their varying purposes, but these fears primarily reflect ignorance of resources.  It is worth noting that many who worry about peak lithium also feared peak oil not long ago, which supports the thesis that a poor understanding of resources lies behind fears of "peaking," rather than actual scarcity.

First and foremost, the “peak fill-in-the-blank” represents a mindset rather than an analytical hypothesis. Neo-Malthusians embrace the notion that resources are insufficient to support the current or projected population, at current or projected income levels, and therefore, conservation and a simpler lifestyle should be pursued, if not mandated. The most extreme case are those who fear overpopulation so intensely that they seem to prefer massive dieoffs from disease as pre-emptive solutions.

But given that the world is facing an enormous ramp-up in demand for lithium-ion batteries for electric vehicles, there is a more sober concern that global lithium resources might be insufficient. As one commentator noted, Telsa alone is projected to need 8,000 metric tons of lithium a year by 2020 to build its cars and Powerwall home battery systems. He went on to note that resource estimates of lithium appeared to be increasing, but were only likely to support a couple of decades of accelerated consumption.

It is very true that estimates of lithium resources have increased, but not just recently. (See figure below)  Like pretty much all nonrenewable resources (minerals and energy), estimates of resources tend to increase over time because of the very nature of the estimates. Few if any represent the total resource, but instead are of the amount thought to exist with high confidence and to be recoverable with current technology and economics. Geologists might understand that technological advances will increase the amount of the resource that can be recovered economically, but they are loath to attempt to predict that progress or make quantitative estimates of it.  Thus, as knowledge and technology improve, so do resource estimates. 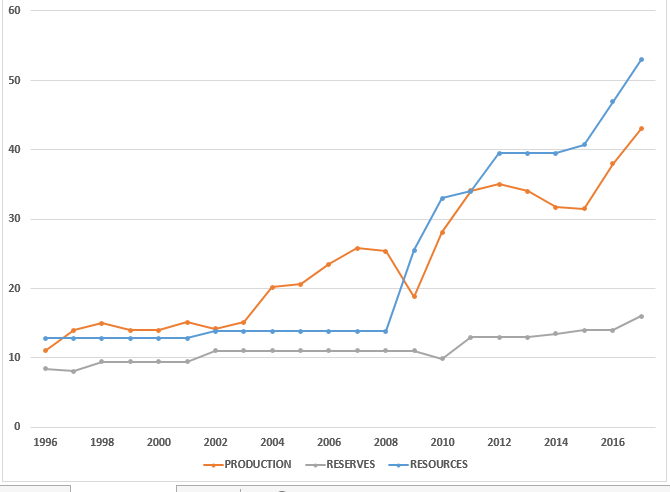 Reserves are a different matter from resources, and some analysts are concerned that they aren’t growing rapidly and that they are concentrated in a small area. As one put it, “But in an even stranger twist of fate, most of the world's reserves of lithium carbonate are located in a tiny triangle located high in the Andes Altiplano, a remote, high desert region shared by Chile, Argentina and Bolivia.”