In July, the Administration postponed any decision on promoting domestic uranium mining companies and created a Nuclear Fuel Energy Working Group to examine further the entire question of nuclear energy. This was done despite the fact that the Department of Commerce had recommended imposing purchasing quotas of domestically produced uranium on utilities companies. More recently, the Trump Administration has given the Nuclear Fuel Energy Working Group 30 more days to prepare its report, which should be ready by the middle of November.

The statement of the Administration in July and the creation of the Working Group were followed by a disastrous fall in the share prices of domestic uranium producers. See below for the share price of Energy Fuels Inc. (NYSEMKT:UUUU) and Uranium Energy Corp. (NYSEMKT:UEC).

It is a fact that uranium mining in the US was once a flourishing industry that has practically been wiped out by cheap imports of uranium from Russia and Kazakhstan besides Australia and Canada. The few companies that remain have difficulty in breaking even, with a spot uranium price of $24. 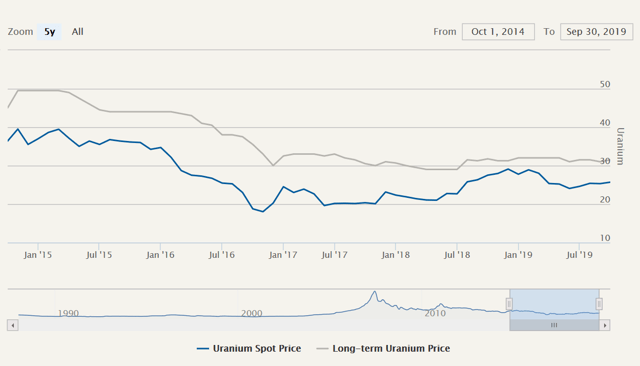 It is obvious that uranium is a strategic commodity. 20% of US electricity is generated by nuclear power plants. Uranium is also necessary for the DoD to keep nuclear submarines running and providing for other strategic needs. Depending on imported uranium is not an ideal situation. One could learn from past mistakes like when a Chinese SOE (State Owned Enterprise) acquired a state of the art processing facility for rare earths in Indiana in 1995. There was a requirement that the plant had to remain in production for at least five years. At the end of the five-year term, the plant was closed, dismantled, and reassembled in China. Rare earths are important for the production of many electrical items. In the case of uranium, it takes several years to get a uranium production facility going because permits have to be obtained, exploration has to be carried out, and the mine has to be constructed. In the short term, having no domestic uranium producers or even minimum production could be a strategic weakness.

When one speaks of reserves, there is a difference between uranium in the ground and mined uranium in the form of yellow cake. The EIA discontinued its reports of US uranium reserves in 2010 (U.S. Uranium Reserves Estimates). In comparison with the strategic stockpiling of petroleum reserves, there does not seem to be a strategic stockpile of uranium. The EIA site does not have a uranium stockpile page. Commercial inventories held by US companies (Uranium Marketing Annual Report) would suffice for less than a year of demand. 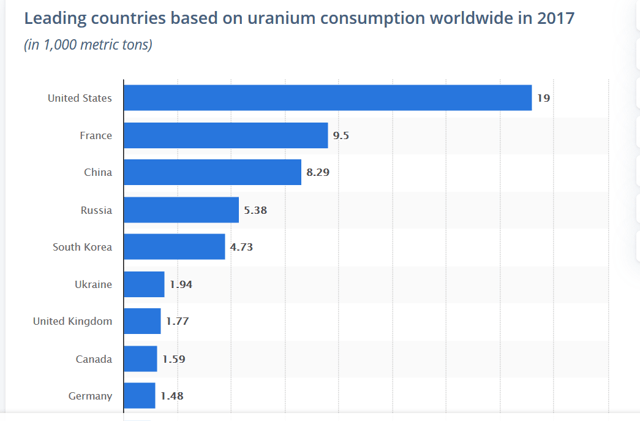 Doubtlessly, the Nuclear Energy Working Group will have researched all these aspects of the nuclear situation in the US. Since uranium contracts, however, are more often long term, the companies operating nuclear facilities are probably banking on being able to buy uranium at the currently very low prices in the spot market. It is highly probable that the industry lobbyists have been working overtime to convince the Administration that nothing should be done to protect domestic uranium mining companies since any measures taken would be sure to result in higher prices for uranium in the US. If a quota system is not adopted, then a 100% tariff rate would be needed to bring the price of uranium to a level that might be interesting for domestic producers. The utility companies would surely resist any such price increase.