Royalty companies give investors the opportunity to invest in a portfolio of ore deposits with less risks compared to a traditional mining company.

Almadex is the result of a spin off from Almaden Minerals and has properties in Mexico and Canada.

Maverix just became more diversified and now has seven productive assets in the Americas, Burkina Faso and Australia, with a nice growth profile in the 2017-2020 timeframe.

Abitibi Royalties is cash flow positive and owns royalties on land near the Agnico-Eagle and Yamanas' gigantic Malartic Project, Eldorado Gold in Turkey.

In this article we will briefly explain what a royalty company is and take a look at three small caps dealing with gold: Abitibi Royalties (OTCPK:ATBYF), Almadex Minerals (OTCQX:AXDDF) and Maverix Metals (OTC:MACIF).

This article is sectioned in four parts. In the first part we will explain what a royalty company is and analyze how and why they are valued differently than miners. From here on we will briefly present each company in a separate section.

This article will not provide the reader with specific trade recommendations. Rather, it is a primer on how royalty companies operate and a review of three of these companies that I personally consider well-managed businesses. Hereby it should be noted that the reader should do his own due diligence before investing. The comment section will be open for discussion about royalty companies in general and specifically about these three. Feel free to participate.

What is a royalty company and how does it operate?

It is a well know fact that ounces in the ground and, in general, not-yet-mined ore, are valued at less than a sellable refined ounce would sell. The rationale of this being that there is still uncertainty about the ability to extract the ore in the first place, whilst also having to take into account the cost that we have to incur to extract it.

Different metals contained in different ore bodies are valued differently, not only because of direct mining costs but because of various risks specific to the extraction of said metals. Grade, jurisdiction and metallurgy, as well as the management's ability to execute the mining plan are for instance all important aspects to consider.

For all these reasons not all ounces in the ground are valued the same amount and this is where royalty companies come in; these devised a clever way to capitalize on execution risks by paying a lump sum to the mining companies upfront to build the mine, while retaining a royalty on the metals extracted. Herewith, all risk and liability lie upon the operator of the mine.

Before we move on, there is an important notion to retain: the difference between a royalty and a stream. Royalty companies come in two different forms, which should not be confused: the previously outlined lump-sum cases as well as streams. The owner of a royalty does not have to pay anything anymore to anybody and will only collect a % of the extracted metals. With a stream, the owner of the stream will pay the mining company a certain fixed or variable fraction of the price for every ounce that the mine owner gives him.

Below you can see a visual of how a stream works in practice. What is interesting is that ounces yet not mined by royalty companies are valued higher by the market than ounces in the ground owned by miners. This happens because the royalty owner does not have to bear the operational risks inherent to the actual mining of the ore (cost overruns, bankruptcy), while it gives the royalty owner continued exposure to future exploration upsides. 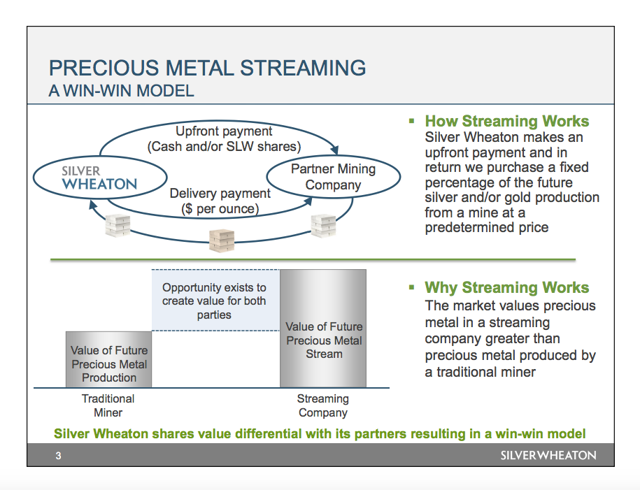 Below a Franco-Nevada (FNV) slide that schematically explains the risk/reward for royalty companies and miners. 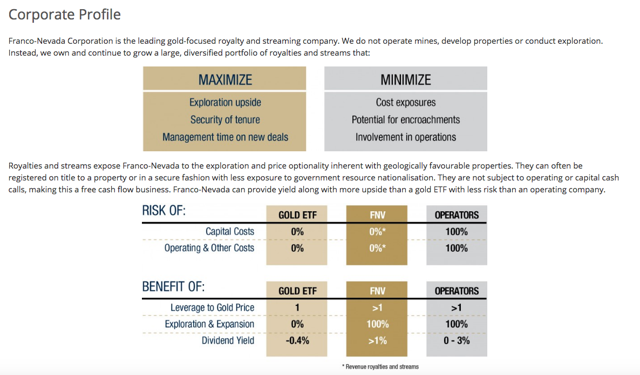 To wrap all of this up, we just have to keep in mind that a royalty company gives you exposure to the underlying assets and eventual price increase, without the operational risks inherent to mining operation, while also retaining the eventual exploration upsides of the property. This is why royalty companies' ounces in the ground are valued higher than miner's ounces in the ground, as the risk is generally considered smaller and hence they can command a premium.

Almadex Minerals was originally a spin-off from Almaden Minerals (AAU), with which it shares part of the management: the father and son Poliquin duo. It was one of the success stories of 2016 following the sizable Cu-Au El Cobre discovery in August 2016 in Mexico.

The company has no debt and owns cash, bullion and shares of several mining companies (more below). Almadex owns several NSR royalties on projects managed by other companies, Mexico being the main jurisdiction. The company owns its own drilling and geophysical equipment in order to explore it portfolio of exploration properties.

Almadex' East Mexico discoveries include the El Cobre Gold-Copper Project (100% owned by Almadex), the Caballo Blanco Gold Deposit - which was sold in 2011 and recently bought by Candelaria Mining (OTCQX:CDELF), where Almadex retains a 1.5% NSR - and the Ixtaca Deposit that is currently developed by Almaden and where Almadex retains a 2% NSR. You can read more about the Ixtaca deposit and Almaden in a monography that I wrote in December 2016. Agnico-Eagle (AEM) acquired 9.9% of Candelaria in 2017, meaning that there is an interest from a major gold miner.

All the three major royalties in the portfolio are PEA stage. The Ixtaxa deposit is being brought towards production and should be commissioned in H2 2019. 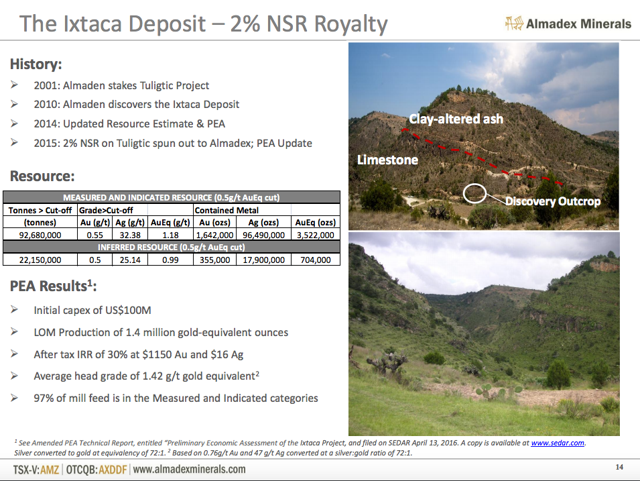 Almadex also owns a 2% NSR on the ELK deposit operated by Trek Mining (OTCPK:LWLCF), a past producing gold mine located in Southern British Columbia, Canada. The portfolio is not limited to these properties and royalties but these are definitely the most important as the others are relatively early stage. 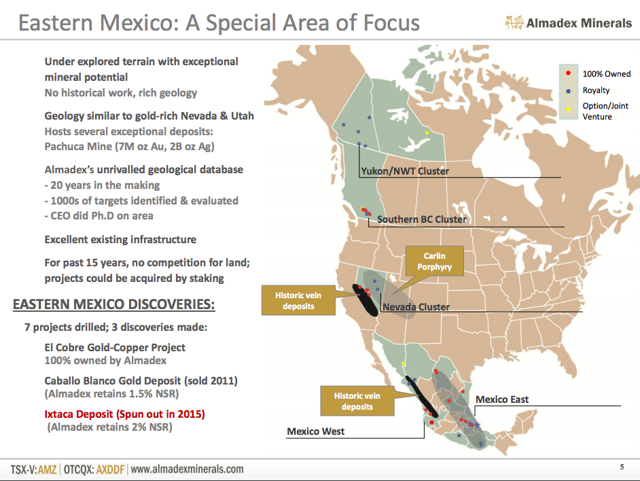 The company has an insider-ownership of around 15% and a relatively tight share structure. As you can see in the chart below, the share price went up substantially in 2016 after the El Cobre discovery. 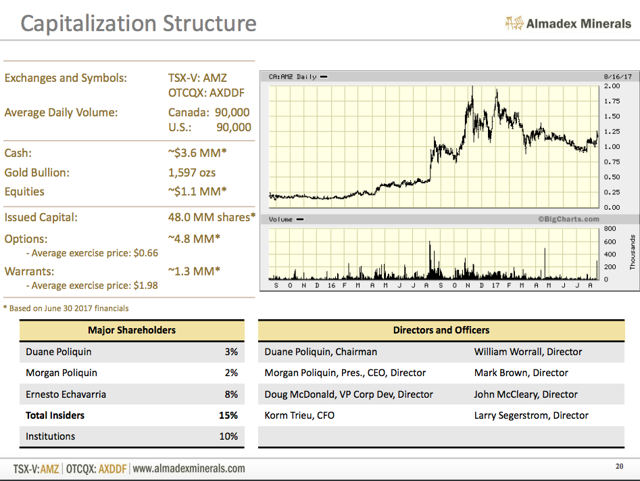