The Importance of Carlin-Type Gold Deposits

The world’s largest gold miners are joining forces as part of a major overhaul of the global gold industry, and Nevada is at the epicenter.

It’s no surprise -- the state is recognized as one of the world’s top jurisdictions for gold, and the precious metal is Nevada’s most valuable export. Total gold production to date is more than 225 million ounces, from some 600 past and current gold mines.

The numbers back up Nevada’s continuing importance. Current annual production of 5.6 million ounces (2017) is higher than other top jurisdictions such as Canada, South Africa, and Mexico. About 4.1 million of those gold ounces come out of the three mine complexes that comprise the new Barrick/Newmont joint venture, now called Nevada Gold Mines. In fact, Nevada produces more gold annually per square kilometre than any other jurisdiction on Earth.

And it’s not just about the ounces. Nevada has become an important profit center for both Barrick and Newmont, Nevada’s two largest players. The Nevada JV will produce some 4.1 million ounces of gold annually at low cash costs, according to Barrick, not to mention JV synergies of $5 billion. Cost savings are a primary motivator for a challenged sector and Nevada has been a top jurisdiction for large scalable operations.

Nevada’s 2017 production of 5.6 million ounces is impressive. However, it’s only part of the story. Gold output in Nevada has actually declined 40% since peak production levels in 1998. And that statistic reveals a lesser-known part of the Nevada gold story.

A valuable but depleting resource

During the last 160 years, since the first rush of prospectors in 1859 to Nevada’s famous Comstock Lode gold and silver discovery, geologists have effectively and exhaustively explored and banged on virtually every rock they can see at or near the surface, the results of which are the 600 past and current producing gold mines in the state.  While the total number of mines is large, in terms of the total number of ounces, the vast majority of Nevada’s gold production has come from a much smaller number of large deposits, specifically Carlin-type gold deposits (CTGDs).  Nevada CTGDs have a combined endowment of more than 250 million ounces, which is even more concentrated when you realize 85% of these CTGD ounces come from only four clusters or “camps” of deposits: Carlin, Cortez, Getchell, and Jerritt Canyon. 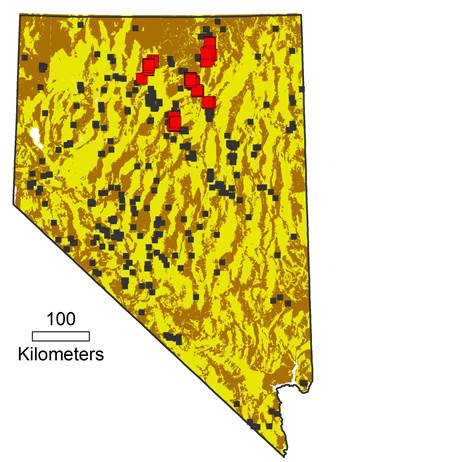 Most investors are well aware of Nevada’s mineral wealth and its now famous CTGDs, but they may not know why the state is so well-endowed. Nevada’s incredible CTGD endowment is the product of unique geology -- the right host rocks in contact with the right structures that have brought up the right hydrothermal fluids that contain enough gold to be concentrated over time – which together provide the perfect setup to create these monster gold deposits.

CTGD gold is so fine it’s not visible to the naked eye, which explains why these deposits were passed over and remained unknown for the first 100 years of Nevada’s mining history. But once exploration geologists identified how these building blocks come together as the source of the richest gold mineralization in Nevada, they quickly went to work.