Heliostar Metals (TSX-V: HSTR) – currently trading below C$1.50 per share – has released assays from the first 2 of 9 holes from the SH-1 target at its flagship Unga Gold Project, Alaska, with both drill holes intersecting high-grade gold mineralization.

Highlights from these first 2 holes include:

Heliostar shareholders can expect assays from the remaining 7 holes from the SH-1 target in the coming weeks.

Heliostar CEO, Charles Funk – whom you’ll be hearing a lot more from in just a minute – commented via press release:

“These excellent results demonstrate the high gold grades contained within the SH-1 zone at Unga. SH-1 is the most advanced target at Unga with 384,318 ounces of gold at 13.8 grams per tonne and is open to expand. Assays are pending for the remaining seven holes completed at SH-1 in 2020 and the resource is expected to grow. Unga received very little exploration in the last 40 years. However, it has several exciting, high-grade gold targets. Heliostar will continue to aggressively explore the property in 2021 with a goal of defining resources in excess of one million ounces.”

The past-producing Unga Gold Project – which is located in Alaska’s Aleutian Islands and holds the distinction of being Alaska’s first underground gold mine – hosts a high-grade epithermal gold deposit of 384,000 ounces at 13.8 grams per tonne.

The initial resource has a drilled strike length of approximately 1.75 kilometers and remains open at-depth with the central portion of the vein system returning a number of impressive intercepts in excess of 10 g/t gold and a few in excess of 100 g/t gold — so very high-grade indeed.

As you can see from the property map below, the Unga project is target-rich with more than 25 distinct areas with showings of epithermal gold-silver-copper and extensive areas of hydrothermally altered rocks particularly along the Shumagin and Apollo-Sitka trends. 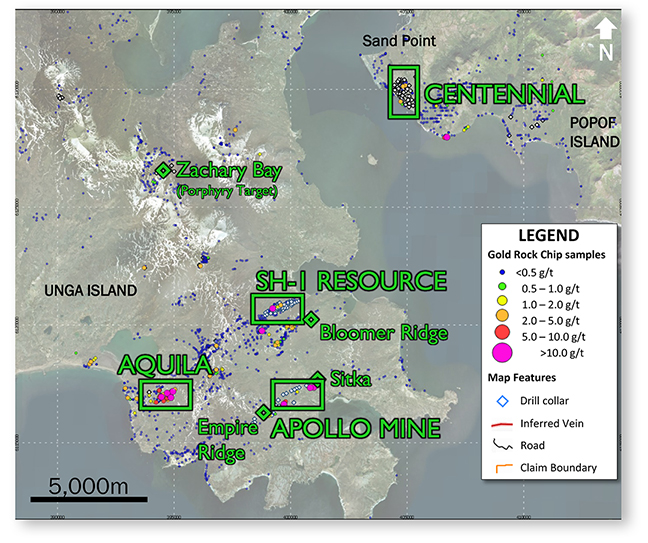 With four priority targets – SH-1, Aquila, Apollo and Centennial – and with an initial goal of defining greater than 1Moz of high-grade gold mineralization, Heliostar Metals is certainly one to watch in the junior precious metals space.

The company is planning a Phase-2, ~20,000-meter drill program at Unga for March/April to include step-out drilling at the SH-1 and Apollo targets plus a number of scout holes on new targets. 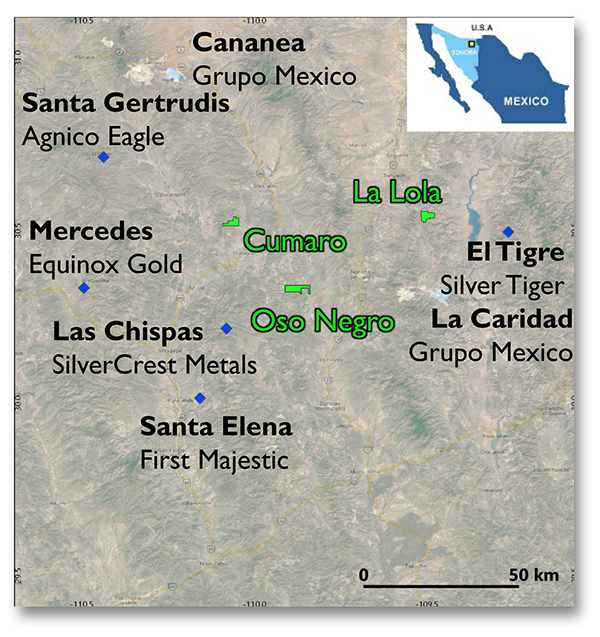 Plans are to drill at La Lola – which has returned samples as high as 58 g/t gold and 424 g/t silver – and to conduct mapping and sampling at Oso Negro and Cumaro starting next month.

And strategically speaking… by having its flagship project all the way up north in Alaska’s Arctic zone plus the three exploration projects down south in the Mexican desert — Heliostar looks poised to keep the drills turning, and the market engaged, year-round.

Heliostar is well-financed with C$5.5 million worth of cash and short-term investments.

Our own Gerardo Del Real of Junior Resource Monthly and Junior Resource Trader sat down with Heliostar Metals CEO, Charles Funk, for an overview of the latest high-grade hits from Unga plus a look at the company’s impressive portfolio of early-stage gold exploration projects in Sonora, Mexico. You can listen to that interview right here.

You can also click here for more information on Heliostar Metals.