The Highest-Impact Oil and Gas Play in the World?

Editor's Note: I first introduced you to Reconnaissance Energy Africa a little over a month — and 70% — ago (interview here). Founder Craig Steinke calls it "the highest-impact oil and gas play in the world right now." His company is about to ship a rig to the Kavango Basin in Namibia, which it entirely controls. It'd be like if one company controlled the entire Eagle Ford. I recap recent exploration progress and estimated oil in place with Craig below as the company approaches shipping the rig to spud the first well by the end of summer.

Nick Hodge: Hi, this is Nick Hodge with the Outsider Club. I have here once again the founder of Reconnaissance Energy Africa (TSX-V: RECO)(OTC: RECAF), Craig Steinke. The last time we spoke you'll remember that oil was just coming out of a negative period. We experienced a bit of deflation on the back of coronavirus and shares of Recon were down around C$0.50 or $0.55 and have come up to C$0.85 to C$0.90 as oil has rebounded a bit. And there's lots of new and exciting things to talk about with Craig. So Craig, thanks for coming back on.

Nick Hodge: Last time we spoke was the first time I introduced this story to Outsider Club. Why don't you remind us what we were talking about then as far as Namibia and the Kavango Basin?

Craig Steinke: Well, what we were discussing is that this has developed into probably the most important exploration play worldwide. And the reason for that is that is we've discovered a new 30,000-foot sedimentary basin in northeast Namibia at Kavango Basin. And one company, ReconAfrica, holds the entire basin, which is larger than the Eagle Ford. And one of the differences between the two basins is that the Eagle Ford is held by over 100 companies and ReconAfrica holds the entire sedimentary basin. And I think why it's so important is one company holds the basin but there's none of these left, Nick. To the point the industry is aware there are no basins of this size and depth left in the world. There's a couple offshore up in the Arctic that Russia and the U.S. are fighting over but onshore there's no basin of this caliber in size left undeveloped.

Nick Hodge: Well, and importantly, and maybe you should tell it because I'm not as technical as you, but as I understand it sedimentary basins of this depth are always found to contain hydrocarbons. Is that correct?

Craig Steinke: Well, that's right. That's a very important point, Nick. And the reason is, is that Bill Cathey, the CEO of Earth Fields Technologies, who does all of Chevron's new basin work around the world. They don't use anybody else but Bill and his client list is Exxon, Shell, Occidental, Conoco. His point is, "I know every basin in the world," and he said, "All basins at this depth, 30,000 feet produce commercial grades of hydrocarbons." And the point is, this is the key takeaway Nick, is that a deep basin versus a shallow basin, say a shallow basin 10,000 feet deep versus a 30,000-foot sedimentary basin, is the deep, deep basins have the thick fill of sedimentary rock. And the point is when you have that much fill of sedimentary rock always do you find somewhere in that thick package of sedimentary rock the right combination of heat and pressure to cook the organic materials in the shales to produce liquid hydrocarbons. Happens in every basin of this depth and it makes sense.

Nick Hodge: Well, we're going to find out. You've got a rig on the way and we're going to talk about that in a second. But first I wanted to ask you for an update on what's happened over the past month or so since we've spoken as far as land position and interpretation of exploration tools. Can you speak to that a little bit?

Craig Steinke: Well we've been working on the eastern extension of the Kavango Basin, which extends into Botswana. We've been working on that for quite some time. And ReconAfrica just acquired a licensed contract in Botswana comprising 2.45 million acres, which covers off the eastern extension of the Kavango. So now ReconAfrica holds 8.75 million acres in Botswana and Namibia and has the entire basin. Again, now larger than the Eagle Ford. But then on top of that, we've been talking about the unconventional — the shales. That's where it all starts. You've got to have the kitchen, that's where the oil is. But then once it's cooked... if the shales or the source rock expels oil and gas into the more permeable zones as well... we call that the conventional.

So our technical guys have been working on the conventional component over the last three, four months and we've just come out with our play maps which is on our corporate presentation, very important. And collectively we now have 31 billion barrels of oil in place in the conventional and unconventional. 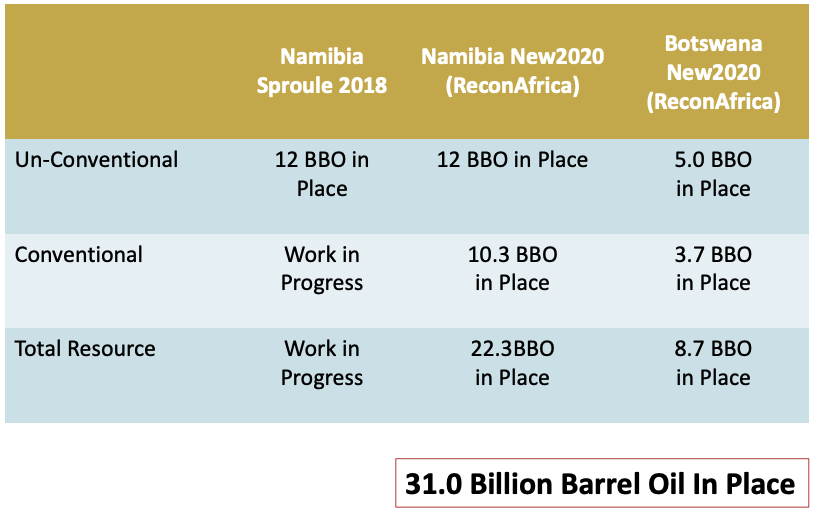 Craig Steinke: Great. You can see the aeromag gives you the depth to basement. And it's very accurately delineated the igneous rock and the metamorphic rock — or the basement — and again everything in between is sedimentary rock. And we anticipate that because we are keying off the ST1 well, which had 620 feet of Permian shales, which is far to the west of the Kavango. As the basin deepens in every other basement in the world naturally you'll get a thicker Permian petroleum system. And again, up to we feel five to 10 times thicker... so up to 6,000 feet of petroleum, Permian petroleum system to choose from. And so, we anticipate we're going to find the Permian shales in there, very thick, and Permian conventional in-place when we drill this. But depth to basement it gives you a beautiful picture of what this basin looks like and that's exactly what you show to your joint venture partner. That's what gets them excited.

Craig Steinke: Fortunately we were able to attract a friend of mine, Nick Steinsberger, who's a drilling and completions engineer. But Nick is most renowned for being one of — and actually the key technical guy — within the four technical guys within Mitchell Energy at the turn of the century who cracked the code on liberating gas from the shales. And it was Nick who figured out how to apply a slick water frack to the shales to commercially produce hydrocarbons. He's in a league of his own. There's five-plus books written about this guy. There's new books coming out, where Nick is included, and he is world-renowned. And he's just joined ReconAfrica as the drilling, senior VP of drilling and completions.

And here's a point I'd like to make is that all the technical guys in ReconAfrica... they're all successful. These guys don't have to work and they're attracted to ReconAfrica because it's such an exceptional opportunity. If you're a technical person, Nick, or an investor from that perspective as well, you only get to discover a new sedimentary basin once in your life at best. And so, the company is basically it's got its choice of technical people to choose from. We're turning away technical people. This is an extremely exciting project, it's unprecedented. The highest-impact oil and gas play in the world right now.

Nick Hodge: Well, it's huge. I mean, just to reiterate 6.3 million acres in Namibia, 2.45 million acres in Botswana that Recon controls. And there have been targets identified on both, both conventional and unconventional targets on the Namibia and Botswana side. The market is getting excited and in my view will continue to as the let's call it D-Day gets closer, I mean drilling day, which is what I as a speculator in the resource space get excited about. Because we're going to poke a couple of holes in this thing and see what's down there. And so, why don't you give us an update on that, where the rig is and when you expect it to get onsite?