Sprott Gold Report: No Way Out

On September 17, 2019, overnight repo rates spiked 121 basis points, climbing from 2.19% to 3.40%, providing yet another crucial buttress for the bullish rationale for gold. The spike signaled that the U.S. Federal Reserve (“Fed”) had lost control of the price of money. Without subsequent massive injections of liquidity by the Fed into the repo market, out of control, short-term interest rates would have undermined the leverage that underpins record financial asset valuations. Going forward, unless the Fed continues to expand its balance sheet, it risks a meltdown in equity and bond prices that could exceed the damage of the 2008 global financial crisis. Despite consensus expectations, there appears no escape from this treadmill.

The Fed must monetize deficits because non-U.S. investors are no longer absorbing the growing supply of U.S. debt. Ultra-low, short-term interest rates do not compensate foreign investors for the cost of hedging potential foreign currency (FX) losses (see Figure 1). The U.S. fiscal deficit is too high and the issuance of new U.S. treasuries is too great for the market to absorb at such low interest rates. In a free market, interest rates would rise, the economy would stall and financial asset valuations would decline sharply. 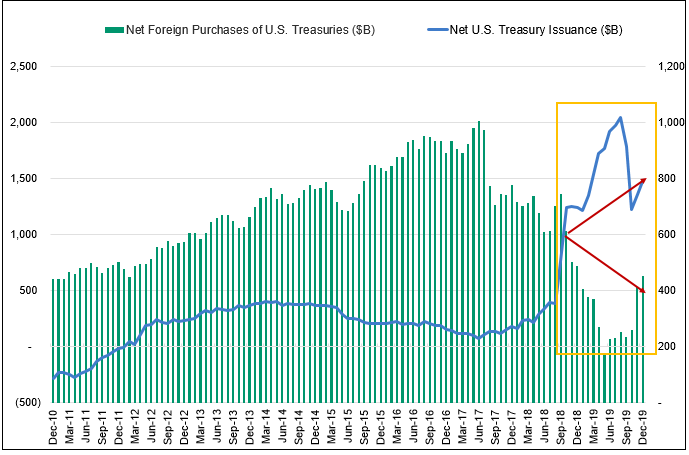 The predicament facing monetary policy explains why central banks are buying gold in record quantities, as shown in Figure 2. It also explains the fourth quarter “melt-up” in the equity market, even with Q4 earnings that are likely to be flat to down versus a year ago (marking the second quarter in a row for lackluster results) and the weakest macroeconomic landscape since 2009 (as shown by Figure 3). 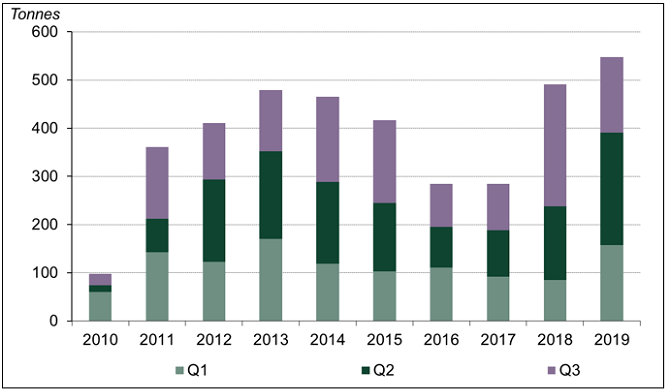 The U.S. ISM Manufacturing Purchasing Managers Index (PMI)1 ended the year at 47.2, indicating that the U.S. economy is in contraction territory (a reading above 50 indicates expansion, while a reading below 50 indicates contraction). 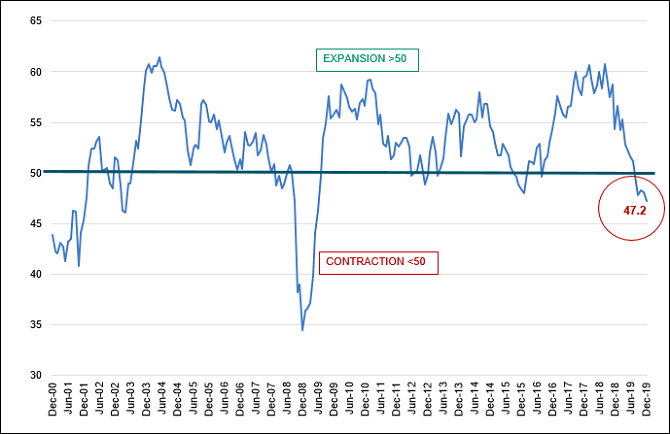 Liquidity injections will result in more debt, both public and private sector, but not necessarily enhanced economic growth:

“As these forms of easing (i.e., interest rate cuts and QE [quantitative easing]) cease to work well and the problem of there being too much debt and non-debt liabilities (e.g., pension and healthcare liabilities) remains, the other forms of easing (most obviously currency depreciations and fiscal deficits that are monetized) will become increasingly likely …. [this] will reduce the value of money and real returns for creditors and will test how far creditors will let central banks go in providing negative real returns before moving into other assets [including gold].”

Gold Bullion and Miners Shine in 2019

Though overshadowed by the rip-roaring equity market, precious metals and related mining equities also had significant gains in 2019 (up 43.49%)2. Gold’s 18.31% rise last year was its strongest performance since 2016. More significantly, after two more years of range-bound trading, the metal closed out 2019 at its highest level since mid-2013, and within striking distance of $1,900/oz, the all-time high it reached in 2011.

The investment world has taken little notice. Despite gold’s strong performance, GDX3, the best ETF (exchange-traded fund) proxy for precious metals mining stocks, saw significant outflows over the year as shares outstanding declined from 502 million to 441 million (or 12%) over the twelve months, despite posting a 39.73% gain, well ahead of the 31.49% total return for the S&P 500 Total Return Index.4