Reviving a Guggenheim Gold Mine in the Golden Triangle

The 3,600-meter, 24-hole program was successful in extending the mineralization from the historic high-grade Georgia River Mine — which, interestingly enough, was put into production by the Guggenheim family back in 1937 with a head grade of 22.6 g/t gold — both along strike and at-depth.

The project has also caught the attention of Eric Sprott of Sprott Mining who is investing $2 million into the company to help fund exploration. 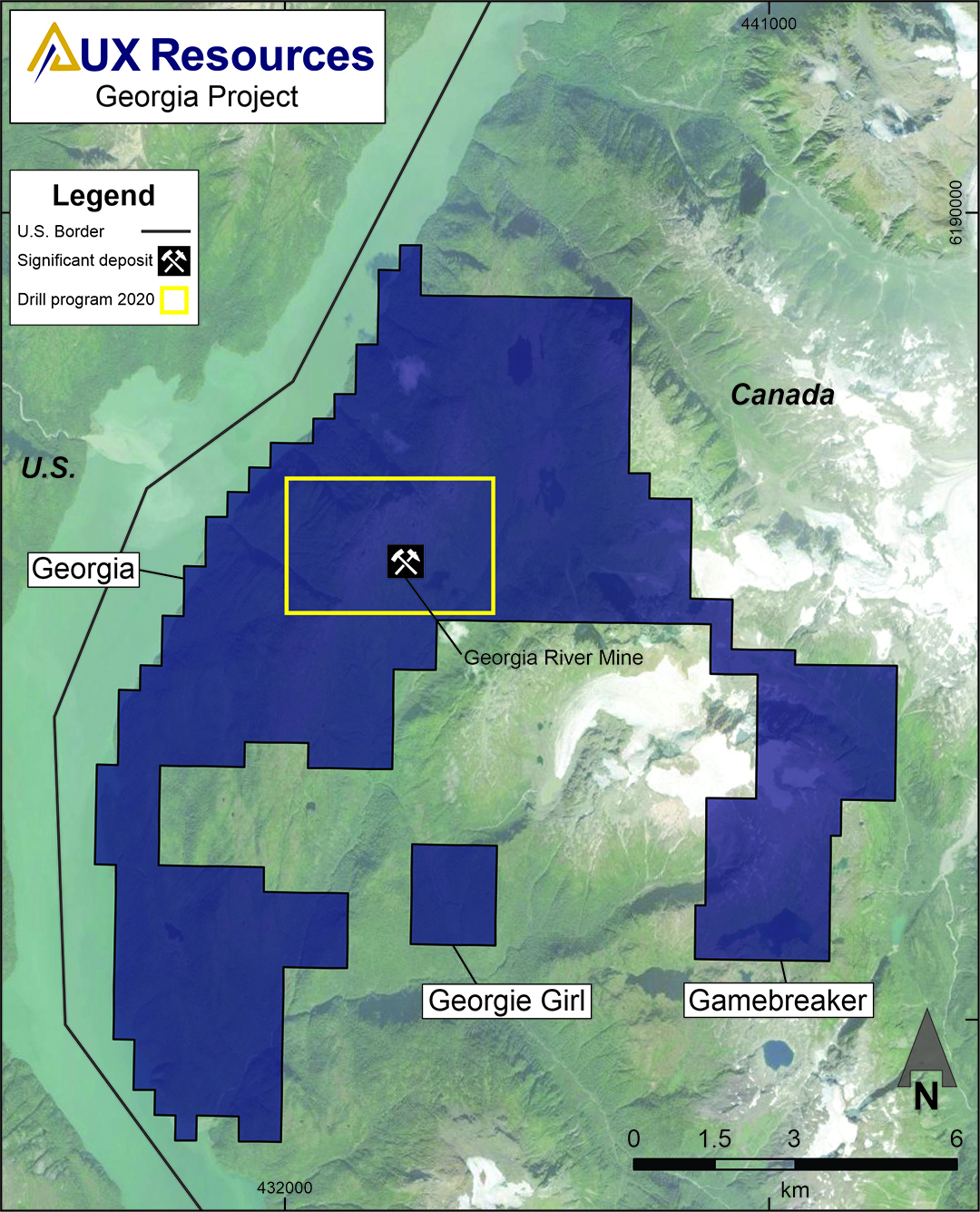 AUX CEO, Ian Slater — whom you’ll be hearing more from in just a moment — commented via press release:

“Despite having been explored for over a century, our intercepts of the SW Vein are among the best ever recorded around the Georgia River Mine. Our drilling confirms that the target is open in multiple directions, including depth. The opportunity to look at this historic high-grade mine with new perspectives shows enormous potential. Advancing underexplored historic mines has long been a powerful and successful driver in the Golden Triangle, and we see numerous parallels with other projects in the area, including Brucejack and the Scottie Gold Mine.”

Additionally, the AUX team has been able to salvage ~5,000 meters out of the 12,000 meters of historical drill core that was left onsite at the Georgia property, which the company is now putting to use in the delineation of drill targets for its upcoming 2021 program.

In total, the company has about a dozen mineral exploration projects under its belt including the Silver Crown, Independence, and American Creek projects (see property map below). 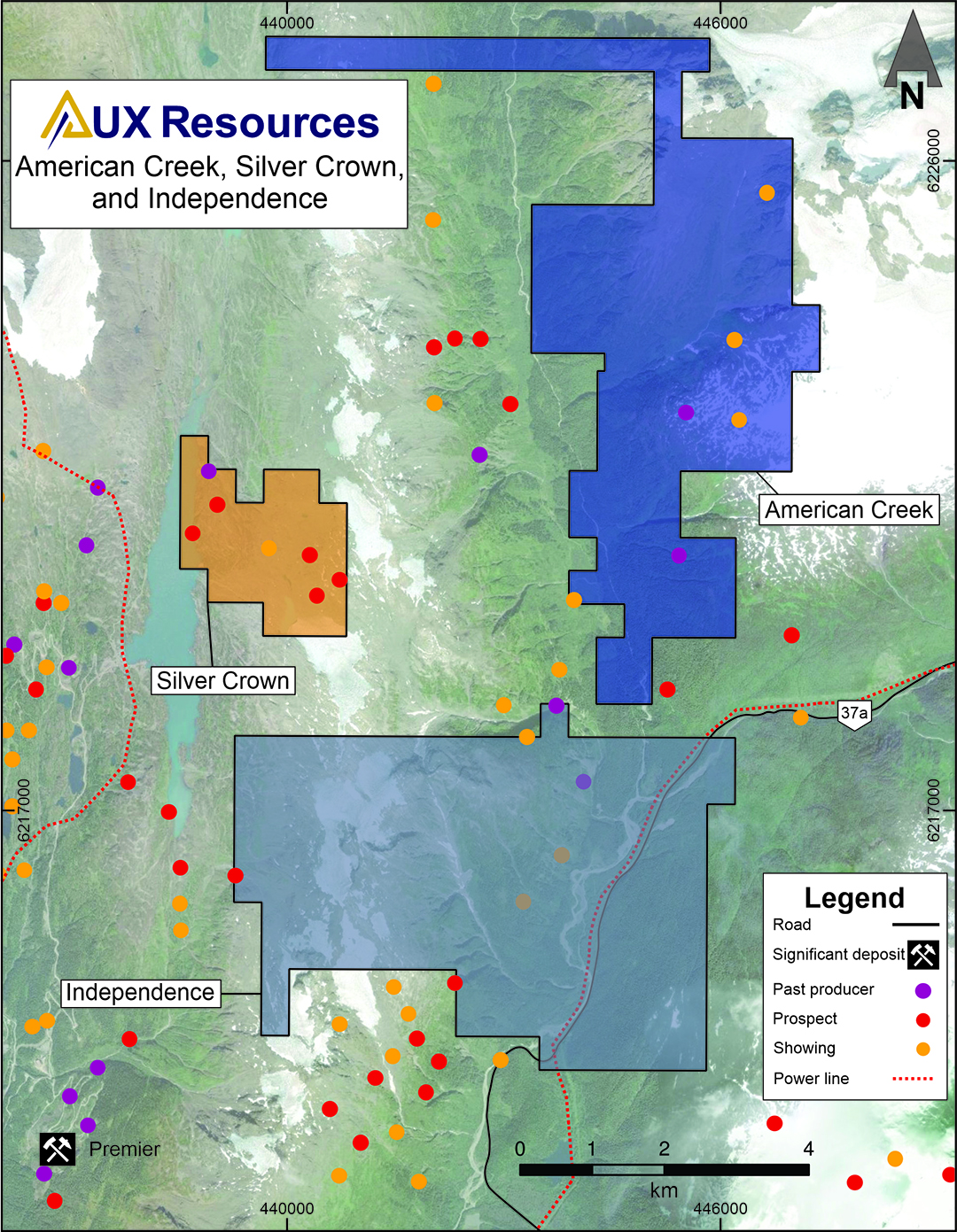 In fact, in the Golden Triangle alone, AUX controls more than 66,000 acres of strategic claims within the Stewart camp.

For those unfamiliar, the Golden Triangle gets its name as it covers a triangle shaped expanse of northwestern British Columbia — hosting one of the chief concentrations of precious and base metals on earth including the world-class Eskay Creek, KSM, and Brucejack mines.

AUX’s Silver Crown property hosts the past-producing Spider 3 Mine where grades of 13.7 g/t gold and 6,449 g/t silver were previously recovered from 16 tons of material. 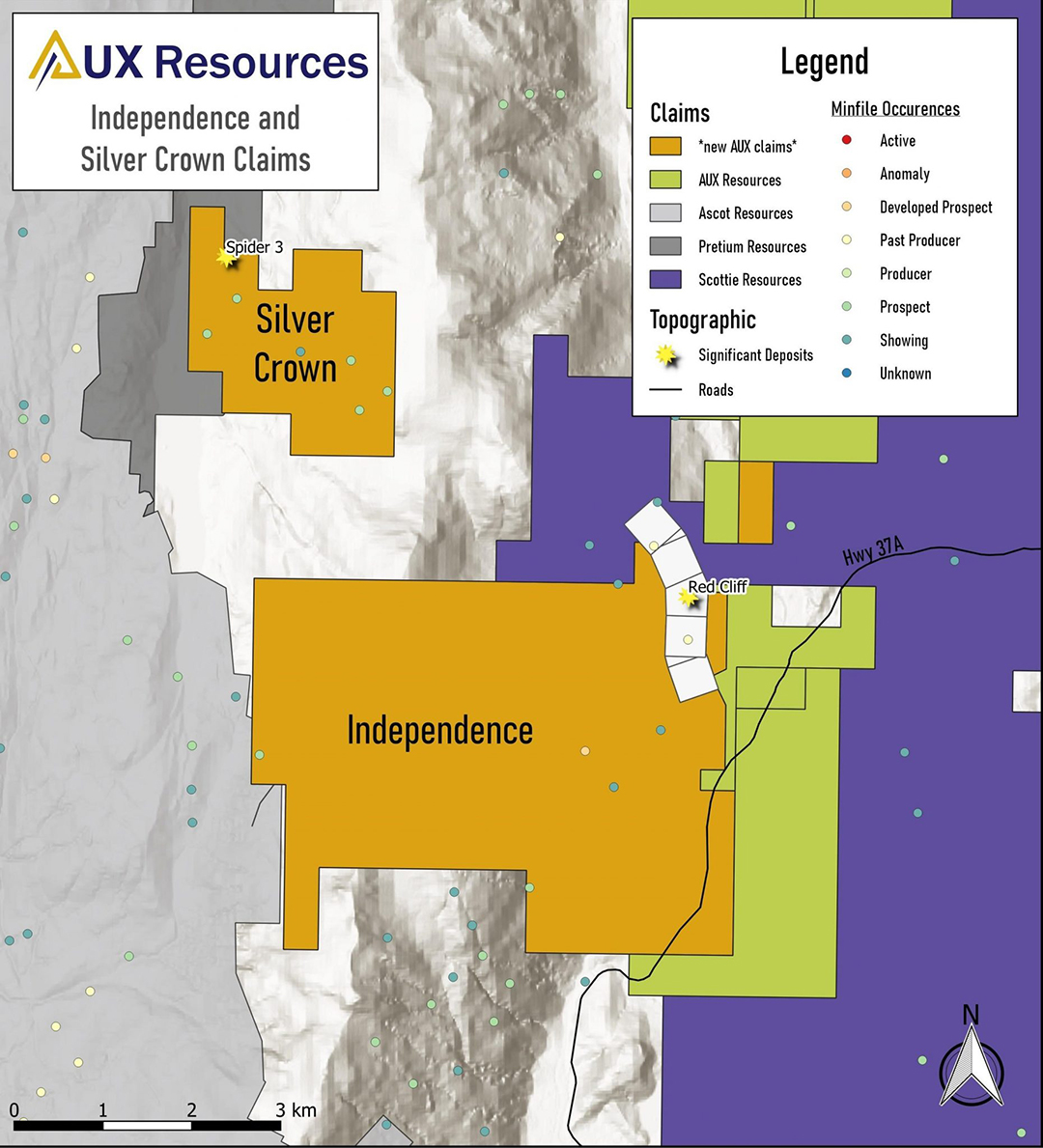 The Independence property hosts the historic Red Cliff Mine which produced copper-gold in the early 1900s with drill indicated mineralization of 49.2 g/t gold over 18.45 metres.

Noteworthy is that successful mineral exploration in Canada’s rugged Golden Triangle — with its relatively short summer drill season — requires a ton of skill and regional expertise in order to get things done on-time and on-budget.

AUX Resources has that in spades with no less than three Ph.D. geologists working on its BC projects — all with loads of regional experience.

AUX Director, Paul Metcalfe, Ph.D., is a Professional Exploration Geologist with 30 years of experience in volcanic and igneous terrains specifically in the Golden Triangle with the last ten years focused on the Georgia Gold-Silver Project.

AUX Technical Advisor, Thomas Mumford, Ph.D., is a Professional Exploration Geologist with direct experience working in the Golden Triangle, including as VP of Exploration for Scottie Resources.

It’s a team that knows the Golden Triangle well... and they’ve been putting that expertise to good use as evidenced by last summer’s highly successful 3,600-meter drill program which was completed in about a month and also came in under budget.

That wealth of experience will no doubt go a long way in the company’s upcoming 2021 field program where the focus will be on the flagship Georgia Gold-Silver Project wherein several holes from the 2020 campaign intercepted extensions of the historic Southwest vein system.

With that and several other prominent vein systems present on the property — including the Gem, Summit, and Bullion veins — there should be no shortage of high-priority targets with which to point the drills in the upcoming field program.

Our own Gerardo Del Real of Junior Resource Monthly caught up with AUX CEO, Ian Slater, to discuss all things AUX Resources. You can listen (or read the transcript) here.

You can also learn more about AUX Resources by clicking here.