Lithium - the metal of the future with a futures problem

LONDON (Reuters) - Lithium is the metal that will power the coming electric vehicle (EV) revolution.

The build-out of a lithium-ion battery chain, however, is at risk from depressed pricing and a lack of investment in new capacity.

“Money needs to start flowing into the lithium market quickly, or the road to electrification will be stunted by lithium supply, in even the most conservative of forecasts.”

Since then prices have slid further and COVID-19 has massively disrupted both battery manufacturing and end-use demand in a collapsing automotive sector.

Established lithium producers have cut output and deferred expansions. The junior players who joined the lithium rush of three years ago have left in search of other mineral bounty.

The renewed paradox is that with politicians focusing auto sector rescue packages on EVs, particularly in Europe, lithium supply should be gearing up not gearing down.

Its inability to do so is because the metal of the future still has no price visibility. 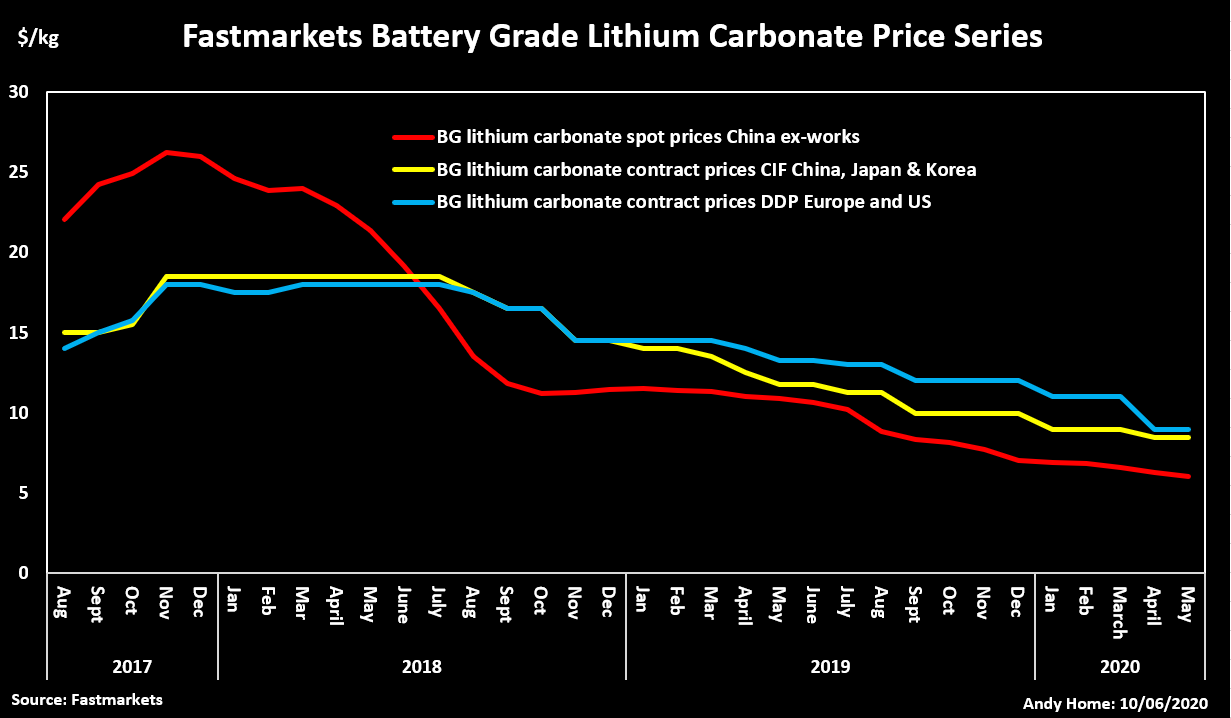 SEEING INTO THE FUTURE

Low prices have seen financing dry up for the lithium production sector.

Banks are more likely to commit to a new metals project if they have an idea of what the price might be when production starts - often a time lag of several years - and even more so if they can use a futures market to hedge some of the price risk they’re taking.

Lithium doesn’t offer such financing comfort. The London Metal Exchange (LME) has a potential contract in the works but it’s still months away and initial producer reaction has been cautious.

Lithium producers contend that even that level of coverage doesn’t capture the diversity of what is a bespoke product tailored for individual battery-maker specifications.

How, the argument follows, can you “commoditize” what isn’t a commodity?

This focus on semantics risks obscuring why any industrial sector needs future price visibility in the first place.

“It comes down to price behavior,” according to Martin Abbott, former head of the LME and current head of globalCOAL, an online coal trading platform.

“If the nature of the market is such that the price is going to move around, then actually it’s the price behavior that drives the need” for a futures price curve, Abbott told BMI’s recent “EV-Fest” forum.

Judged by this metric, lithium looks in desperate need of some futures transparency.

The price boom of 2016-2017 has been followed by a price bust as too much new production came onstream too soon.

The industry was still working through the glut when the coronavirus caused a demand shock, compounding the sense of oversupply.

Yet a new demand surge is already looming in the form of the multiple “green stimulus” packages as governments try and kick-start locked-down economies.

You don’t have to be a market genius to see that another price boom is coming sooner or later as an under-powered supply chain has to catch up with the next demand surge.

Lithium may not be a “commodity” in the dictionary sense but it’s definitely behaving like one price-wise.

Lithium’s challenge, according to Abbott, is to find a standard or set of standards that is applicable to a product that is not chemically standard.

This is how markets such as copper work.