Publisher’s Note: I’ve done the same thing every Thursday for the past 14 years: write my weekly premium investment newsletter, now called Nick Hodge’s Family Office Advantage. Over that time, we’ve made thousands of percent speculating on trends — everything from solar in 2007 to 3D printing in 2012 to lithium, cannabis, and crypto after that. It’s a chronicle of what I’m doing with my speculative capital.

And over the past decade-and-a-half my net worth — as well as the net worth of many of my readers — has swelled.

Below is a rare free glimpse of an issue. It’s from last week. It covers macro themes, a new rare earth recommendation, and some coverage of existing names. All my letters are sector agnostic, though admittedly I do gravitate a bit toward hard assets.

Family Office Advantage costs $1,999 per year. We are running a one-week discount for $999 by using this link, and would be happy to have you as a new member if you like what you see below.

Enjoy the sample issue below.
—Nick

A bit of a stock market pullback is underway.

I’m viewing it as a buying opportunity in some of our cannabis names.

Retail sales jumped 5.3% in January. The media is calling that “unexpected”. But if you’ve been listening to me... it was of course expected as one of the themes I’ve been mentioning is how good year-over-year economic indicators are going to look given that they are being compared to last year when the entire world came to a halt.

Happy Covidversary, by the way!

Trillions of dollars have been printed and pressed over the past twelve months. And with Democrats now in charge and a new stimmy on the way — $1.9 trillion this time! — the dollar’s cute little mini-rally has come to an end, unsurprisingly unable to amass the strength necessary to breakout north of 92. 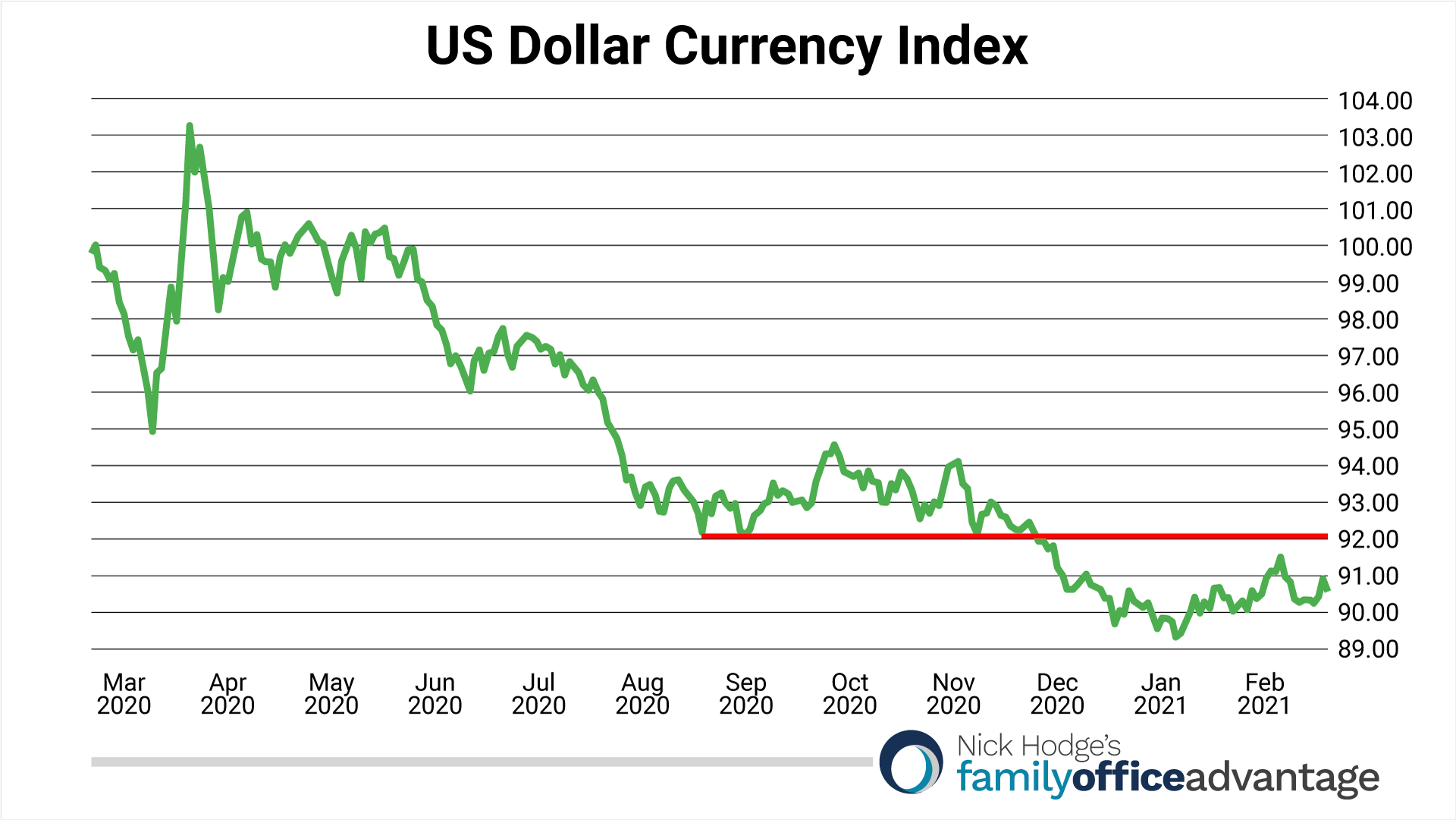 That still-weak dollar, coupled with still-rising bond yields, is the inflation fuel that will continue sending commodities and stocks higher. 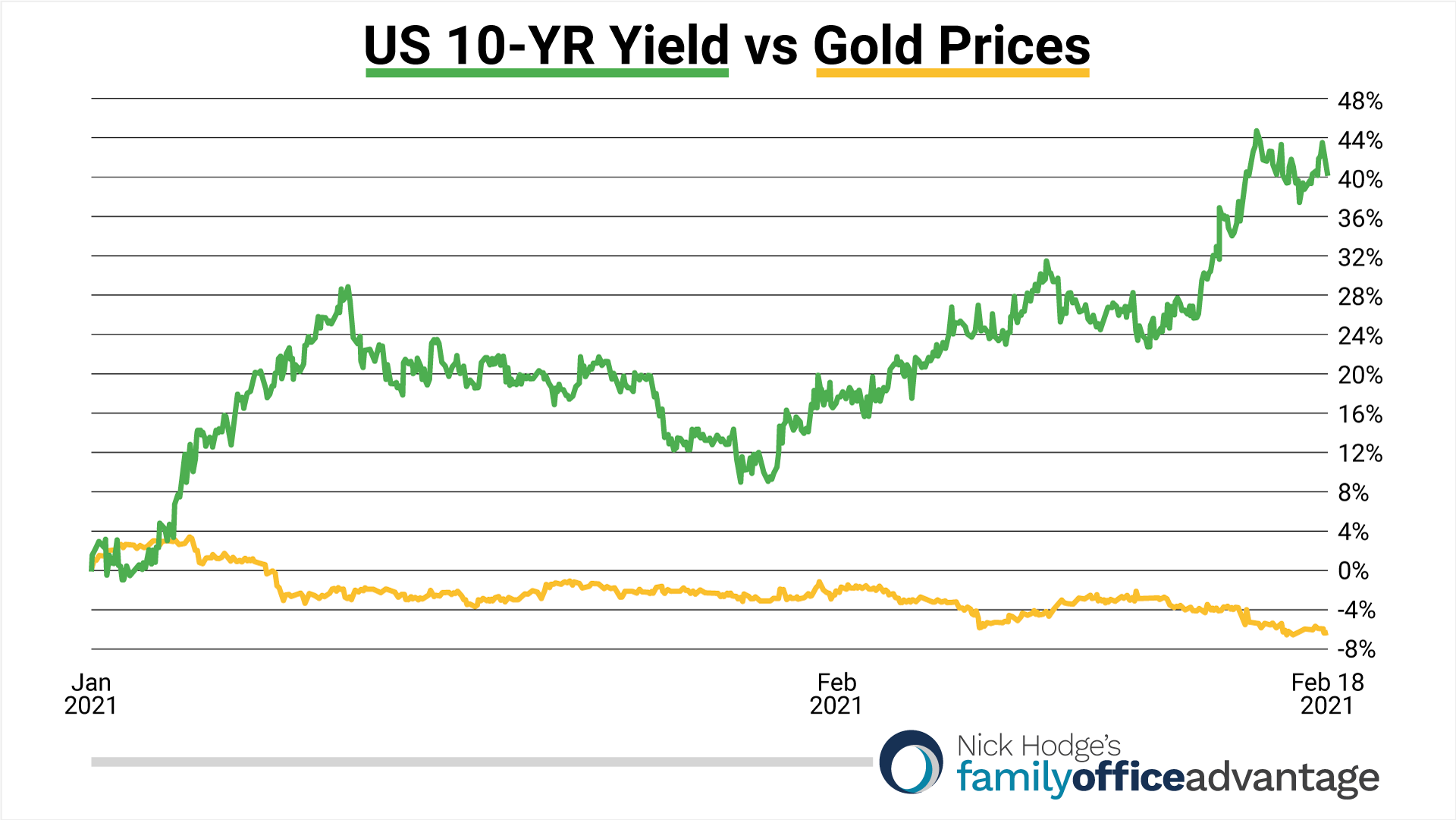 It’s an opportunity to buy some quality gold names while no one is looking, if you’re into that sort of thing. I’ll cover a few below, but it’s also a good time to look at larger miners as they deliver record earnings and increase dividends.

Sector-wise, uranium and lithium are on the move in a big way. And I’ll touch on those in this issue as well.

First, I have to touch on rare earths, which we have little exposure to, but are crucial for the clean energy future we’re seeking and are also rapidly inflating in price.
Rare Earths

For the uninitiated, rare earths are a group of metals that are critical components  of everything from batteries and wind turbines to smartphones and high-tech war machines.

As such, they’re highly critical to the defense and clean-energy ambitions of governments across the globe.

But the production and refinement of this critical group of elements are more or less monopolized by China.

If you’re having déjà vu, you’re not alone.

This same tale spawned a rare-earth stock run back in 2009 that led to thousands-of-percent wins for the best-positioned stocks.

The narrative hasn’t changed any in the past decade.

What’s different this time is the electric car narrative has caught on in a real way. I needn’t tell you what shares of Tesla have been doing lately.

There is also an army of armchair retail traders hell-bent on chasing the entire electric vehicle supply chain.

This, combined with a renewed government focus on rare earths, makes it time to revisit the space once again. Especially because China is once again toying with the idea of limiting rare earth exports.

You may be following along with some of this if you also read Foundational Profits. In that letter, we have been in MP Materials (NYSE: MP) since it came to list via SPAC — and have done quite well.

I have been looking for a more speculative play.

Like uranium, there aren’t many quality rare earth companies. It’s a very small sector. New names have come on lately and done quite well — almost too well to justify buying them right now.

There may be an opportunity to buy some of them on pullbacks, but for now I’m going to take a little bit of a different direction.

Its magnetic material division, called Magnaquench, is a global leader in bonded neodymium-iron-boron (NdFeB) magnetic powders that are used to provide high-performance magnetics for automotive, factory automation, high-efficiency motors, residential appliances, and many other industries.

Its Q4 earnings are expected to be reported at the end of March, and the company says it “expects its fourth quarter results to exceed analyst consensus estimates of $85-million in revenues and $7.4-million of EBITDA (amounts in U.S. dollars).”

Extrapolated out to a year, we can assume Neo will do US$300 million in revenue. It trades with a market cap of US$445 — or less than 1.5X expected one-year revenues. That has some catching up to do relative to other rare earth / electric vehicle plays.

Shares are consolidating below C$15.60, which is where you should start building a position.

I bought a bit more Midas Gold this week before it changed its name, which I’m not entirely fond of, to Perpetua Resources (TSX: PPTA)(NASDAQ: PPTA). Please also note the new ticker symbols. The share consolidation for the NASDAQ uplisting now complete, we are buying Midas... er, Perpetua below C$10.00. I don’t think it stays below that price for long if it gets its permit. That seems to be on the way sooner than later given the recent news of the company being allowed to start clean-up operations at the site as well as a three-month stay recently being placed on a related lawsuit. That three months lines up awfully close with when we’re expecting the draft record of decision.

Ethos Gold (TSX-V: ECC)(OTC: ETHOF) is worth a look as it continues to trade below our buy under of C$0.25. News this week is that Ethos has consolidated the Schefferville gold district with a land position of 36,808 hectares. That’s nearly 91,000 acres of a project that has seen very high grade historical results including 2.23 grams per tonne gold over 19.55 meters. But it’s seen little exploration overall, with only 35 holes put into six of 53 gold occurrences. And that’s just one of several projects it plans to drill this year — all while it trades with a C$17 million market cap, and a quarter of that is backed by working capital.

Chakana Copper (TSX-V: PERU)(OTC: CHKKF) is seeing great success with the drill bit and is cashed up. So it is adding another rig with a plan to turn Soledad into Swiss Cheese, now aiming to drill 26,000 meters this year, with 16,000 meters dedicated to resource drilling. That will include stepout and infill holes. We’ll see those meters in a maiden resource estimate later this year. And we’ll get 10,000 meters of scout drilling to test numerous high-quality targets. A third rig will arrive in April. We’re buying it under C$0.60.

Critical Elements Lithium (TSX-V: CRE)(OTC: CRECF) saw new highs this week as lithium stocks continue to be hot and it closed a C$15 million bought deal offering. If you’re playing at home, we’re up 404% net on Critical Elements after selling 10% in January to bring our cost of shares owned down below C$0.03. It trades at C$1.50, and we are holding our remaining position. 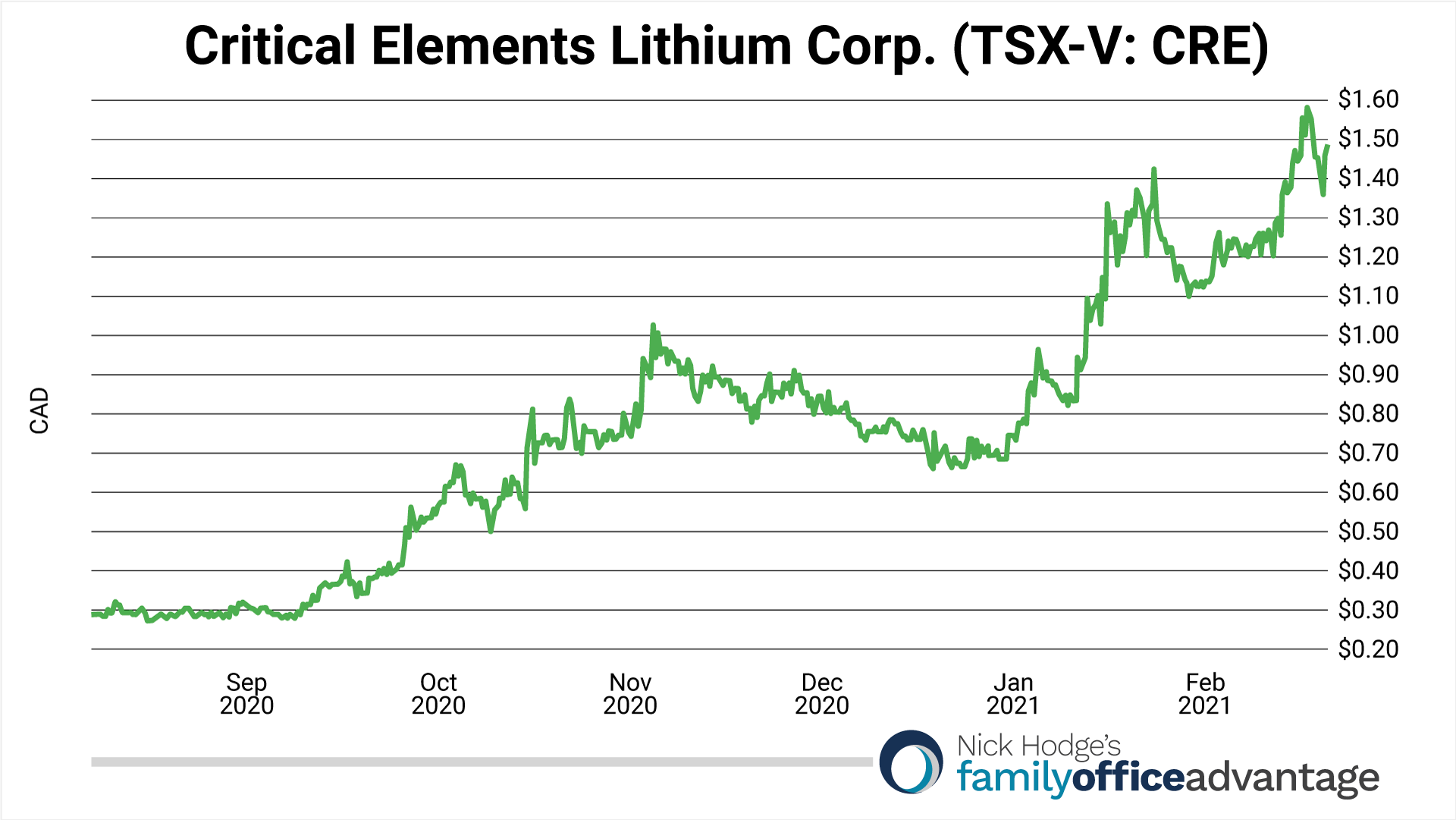 Azarga Uranium (TSX: AZZ)(OTC: AZZUF), however, is still in the red in our portfolio. It is a buy under C$0.33 and currently trades at C$0.25. It is my largest uranium holding.

With Neo Performance Materials, the portfolio now stands at 19 positions. We have one open to get to our full 20.

I am considering some uranium opportunities but do think the stocks have moved a bit too much too fast given that the spot price of uranium remains at $28.00 per pound.
Stay tuned...

On a more somber note than euphoric markets, today I must share with you some sad personal news. This letter for the past 14 years has also served as a diary of sorts.

Long-time readers will know I have written more than one issue from the hospital room after the birth of two of my children.

Long-time readers will also know about Denver, our pit bull and first child. I’ve written about him a few times over the years, most often when we were investing in pet stocks — not pot stocks! — back in 2015 and 2016.

Denver was in his ball-chasing prime then as a strapping 7-year-old. And even back then I was looking far-forward, writing to you about him that:

...my dog Denver will be seven this year. I've told you about him before. My wife and I have already paid for two leg surgeries that saw his cruciate ligaments replaced with titanium. As he ages he will most certainly have leg pain. And we will most certainly pay for Galliprant.

I was only too right. 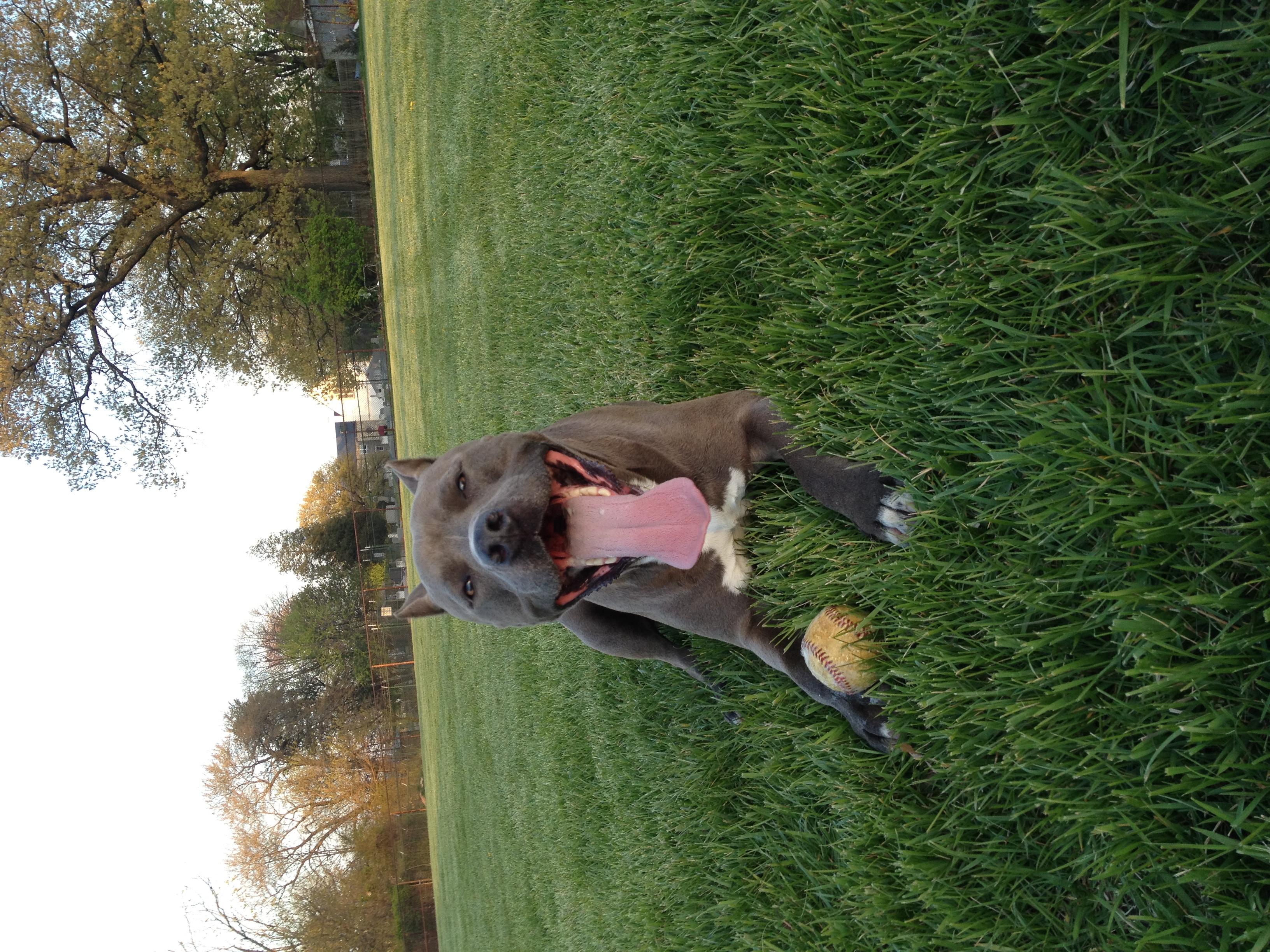 Today, Denver will take his last Galliprant — the leg pain now too much to bear.

The dog I crowned the Sexiest Man Alive for twelve years running served as a nanny to all three of our children. He was in the nursery for every midnight feeding.

He will be missed more than I can put into words. It’s funny how they do that to us.

As my muzzle begins to gray like his, it’s a too-stark reminder of the more finite parts of our existence.

Make sure you’re building something that lasts.

This is where premium members would see the entire portfolio. Click here to join Family Office Advantage today at a special discounted rate.