The Uranium Committee  of the Energy Minerals Division of the American Association of Petroleum Geologists just released their draft 2020 Annual Report last week and the prices and supplies of U look pretty good.

The Uranium Committee monitors the global uranium industry activities, rare earth metals, and the production of electricity from nuclear power, because these drive uranium exploration and development in the United States and overseas. [Full Disclosure – I am a member of the Committee’s Advisory Group]

Modern technological societies require a lot of rare metals, such as lithium, cobalt, vanadium and neodymium, and uranium if you have nuclear power. In fact, there are 35 minerals that are critical to our society. Unfortunately, we don't produce many of them in the United States, but are dependent on other countries like China for our supply.

This has been a recognized problem for years, but has become especially worrisome after this this pandemic has shown the flimsiness of our supply chains.

But uranium seems to be doing pretty well. The United States has more nuclear power plants than anyone else, and is the world's largest producer of nuclear power, accounting for more than 30% of worldwide nuclear generation of electricity.

But do we have enough U in North America to fuel our own nuclear future until that happens? 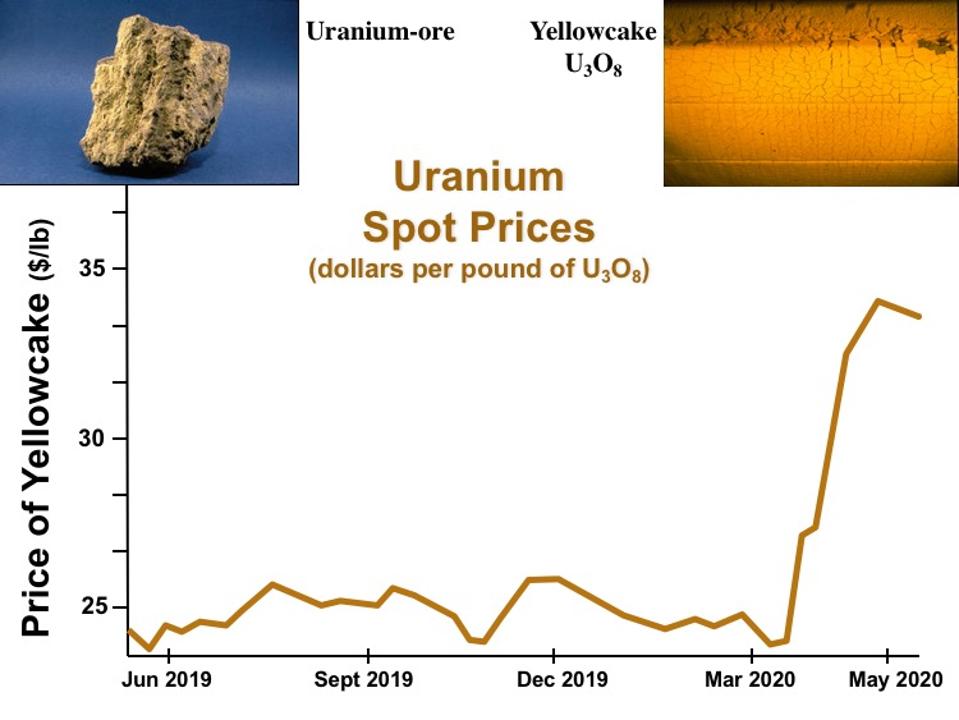 Uranium spot prices over the last year, noting the big surge in price after the pandemic began, from ... [+]

Fortunately for us and our northern neighbor and closest ally, the highest-grade U deposits in the world are found in the Athabasca Basin of Saskatchewan in Canada, often referred to as the “Saudi Arabia of Uranium”. And new deposits in this basin keep being discovered.