How California’s First Millionaire Got Rich

But he didn’t mine anything.

A Mormon convert who became a church leader, Samuel Brannan sailed to San Francisco in 1846. His intent was to establish a Mormom presence on ground he could gain as a result of the Mexican-American war.

As the story goes, he took the tithes for himself instead of sending them to the new church headquarters in Utah.

And in 1847, he bought the only general store in Sacramento. Brannan also founded the first newspaper in San Francisco.

The next year, he was one of the first to learn about the nearby gold strike at Sutter’s Mill when some of its employees came into his store with gold.

And he did not waste the opportunity.

According to papers published by Brigham Young University, upon first hearing of the gold discovery, Brannan:

"proceeded to the spot indicated… set up a preemption claim, and demanded a royalty of 33.33% on all the gold taken out on the bar. So long as the Mormons were largely in the majority of those engaged in mining on the bar, this royalty was rigidly exacted." 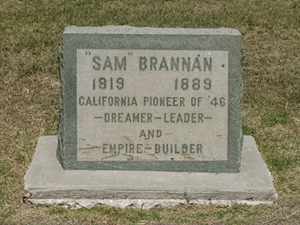 Brannan also bought up all the picks, shovels, and pans he could find… then used his mouth and newspaper to promote the new gold rush.

This is where the term “picks & shovels” comes from.

He did it collecting royalties and providing the things necessary for mining, thereby generating significant cash flow without actually mining anything.

It is still possible to do that today through the royalty model, which we’ll be talking more about later this week.

It’s often the best-performing sub-sector of the gold market.

We’ll not only be showing you why, but we’ll also explore a new entrant in the sector that we think could make shareholders Brannan-rich.