Bob Moriarty: This Time It's Different

In this conversation, Bob Moriarty of 321gold and Maurice Jackson of Proven and Probable discuss the coronavirus, the stock market, what lies ahead for gold and silver, and junior mining companies with potential.

Maurice Jackson: Joining us for a conversation is Bob Moriarty, the world-renowned, bestselling author and founder of the websites 321gold and 321energy.com.

Bob Moriarty: Hi, Maurice. It's good to talk to you.

Maurice Jackson: Always a pleasure, sir. I was revisiting our last interview entitled, "He Nailed It," where you discuss virtually all that's come to fruition in the last 60 days. And I have to give credit where credit is due, sir, you absolutely nailed it, which is precisely why we're delighted to speak to you today.

Bob, let's begin with a phrase that you've cautioned readers about: when a financial guru states, "This time, it's different." As we look at the world today, is it different this time?

Maurice Jackson: Bob, in what regards is it different?

Bob Moriarty: We have the stock market hitting new highs, and we have 30 or 40 million Americans out of work. And if that isn't different, I don't know what is.

Maurice Jackson: Beginning with COVID-19, what has your attention regarding the virus that many people may be overlooking and need to really consider?

Bob Moriarty: Everybody's lying and has an agenda. You're not being told the truth by anybody, and there are some fairly simple questions that anyone can ask and they can come up with conclusions for themselves. That's one of the points that I try to make in my books: It was to teach people how to think for themselves. So, I'm going to put it to you. Do you believe the United States are reporting the number of deaths in the United States? Do you believe that's accurate information? Too high or too low?

Maurice Jackson: I don't believe it's accurate information. I believe they may be tying other deaths into that number. So I believe maybe that the numbers probably would be lower.

Bob Moriarty: So let me ask another question that'll make it a lot clearer. The population of the United States is 4% of the world's population. If the numbers that are being reported are accurate, is there any way the United States could represent 33% of the cases?

Maurice Jackson: No, that doesn't seem logical to me.

Bob Moriarty: Absolutely not. Couldn't possibly happen. Here's what's happening. Even Dr. Deborah Birx admitted what's true. You can die with the coronavirus or you can die of the coronavirus. If you die with the coronavirus and it's written down as pneumonia, the hospital gets $13,000. If you die of the coronavirus, then obviously we cured your pneumonia, but you just happened to die, it was the virus. The hospital gets $39,000. They have a financial incentive to over-report the numbers. The CDC [Centers for Disease Control and Prevention] came out with some statistics showing the difference between dying of the virus and dying with the virus, and the numbers are overstated by about 500%.

Maurice Jackson: That's truly a shame that there's that financial incentive in that regard. When you hear of normalcy, do you foresee us being able to return to a pre-COVID-19 way of life? Or is this the new normal?

Bob Moriarty: No, we will be able to return it, return to a pre-COVID-19.

Maurice Jackson: When do you foresee that coming?

Maurice Jackson: The 1960s, or am I completely wrong here?

So there's two issues you should be talking about. Now you're addressing the COVID-19 issue or the coronavirus issue. The depression is far more important—the depression that you and I were talking about a year ago, that I said was going to start in October, and we talked about in January (interview here), when I reiterated that we were going to go into a depression. Everybody was going to get hurt. It's here. If we come out of it inside of 15 years, it will be pretty remarkable.

Maurice Jackson: You and I had a discussion prior to this interview and you inquired about my background on classical education, which I didn't have any, but to my amazement, based off of our discussion, you referenced someone named Cassandra. Can you fill us in on that?

Bob Moriarty: One has to go back to the Iliad and the Odyssey, Greek mythology. Cassandra was the daughter of King Priam. She was gifted with the ability to predict the future. However, she was cursed in that nobody believed her. And strange enough—and you and I were talking about this—I make a lot of predictions that people think I'm crazy, and a lot more of them come true than people want to admit. But I'm looking at a consensus, and when everybody says the stock market's going to go up, I know that it's going to go down. And when everybody says gold is going to go down, I know that it's going to go up. I pay great attention to natures of psychology and consensus. And if you do that, you'll be right a lot of the time.

Maurice Jackson: Speaking of psychology, I have a chart before us from Google Trends that my son, Brayden, and I were reviewing. And we noticed that when we put it in the search term COVID-19, it spiked to 100 in March and it has fallen off dramatically. Now, although he's nine, he drew a conclusion that people were getting relaxed and there was a greater potential in his view for more infections. Now, I hope we're incorrect. Sir, you're a big advocate of using Google Trends. What does this chart indicate to Bob Moriarty? 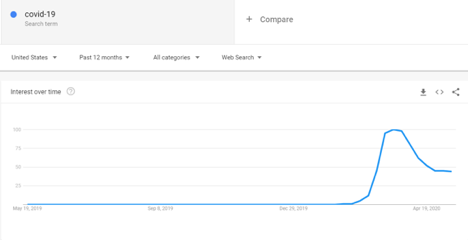 Maurice Jackson: And if they're bored, what kind of situation does that really create for us?

Bob Moriarty: Well, we don't really know. And your son is absolutely correct that having a recurrence of the virus is certainly a possibility.

But there are three issues that we need to think about, one issue being how dangerous is the virus? The secondary issue [is] how dangerous is the depression that we're in? And the third issue that, quite bluntly I absolutely missed, is being quarantined for a period of time, you eventually get to a point you start going stir crazy and you can absolutely see it. There has been a lot of social unrest in the last month and quite bluntly it's because everybody is bored silly being at home. They want to do something else.

So it's certainly possible that there's a recurrence in the virus. My big problem with the virus is, it's been going on for five months. We still don't know how deadly it is. We don't know what the cures are for it. They've got all these agendas. You have any idea what the average age of the people in Italy who died was?

Maurice Jackson: I'm going to assume, not knowing that number, in the 60s?

Bob Moriarty: Seventy-nine and a half.

Maurice Jackson: Well that's—I mean, you're close to your expiration date and I hate to say it in that regard, but I mean, there's a number of factors that go into that number of mortality.

Bob Moriarty: When you're 79.5 years old, don't go to the store and buy green bananas.

Maurice Jackson: Might be a good way to put it. Well, let's discuss the stock market. And again, it fits into the narrative of the depression. The Dow hit an air pocket in March and it descended fast, and last month it's been trying to climb again. Is this the right time for investors to get back into general equities?

Bob Moriarty: Anybody who invests in the general stock market in the next 15 years is begging to give their money away. There's only one safe haven.

Maurice Jackson: And we'll get to that here shortly. So let me ask you this, coincidentally. If general equities are not the place to be, how about the contrarian sector of the stock market—resource stocks and, in particular, junior mining companies. Is this a place where someone should have some exposure?

Maurice Jackson: Speaking of the junior mining companies, are there any that have your attention at the moment, and why?

Bob Moriarty: A whole bunch of them. First of all, commodities in general are at the lowest price they've been in 55 years relative to the stock market. So commodities—all of them, soy beans, wheat, corn, copper, lead, zinc, gold, silver, platinum, palladium—everything is cheap in relative terms. And even in the depression, you still need commodities.

But the real key is, for the mining stocks, it is such a small door that when people try to fit through it, it's going to get very crowded. So overall, I like the market. You had mentioned some stocks, tell me which one you'd like me to cover. 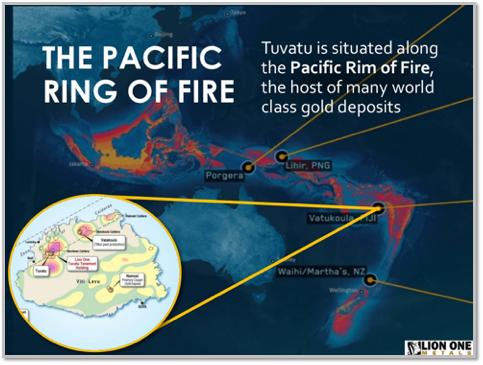 Bob Moriarty: Lion One is a junior that has 100% ownership of the only alkaline deposit in the entire world owned by a junior, the Tuvatu Gold Project (3D Vrify). It's on the Ring of Fire in Fiji. The Tuvatu is approximately 20 kilometers away from a mine that has produced 7 million ounces of gold. LIO is currently drilling, and assay results should be coming in from Australia soon. Lion One Metals has a number of holes that are in for assaying.

This stock has all the potential of being a home run, and they currently undervalued in my opinion. I think people will do very, very well owning Lion One. If gold and silver do what Lawrence Lepard says I agree: The production stories and pre-production stories are going to be the best investments you could make. Now, I've talked in the past about stocks that have tenfold potential. Lepard and I both believe that gold and silver, they go into hyper-inflation, so there are a lot of stocks that you could be buying mow that have hundred-fold potential. 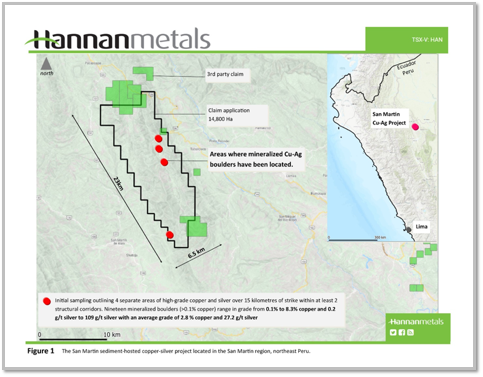 Bob Moriarty: Hannan Metals is down in Peru, and they have an unusual form of silver-copper sedimentary deposit. I think it's going to be a giant district—I mean literally hundreds of kilometers—and Hannan is very cheap. I think they're $0.20 a share. They have a CA$14 million market cap. Quinton Hennigh, who is my best friend, is an advisor to the company. I own shares. I think it's a great company. I think it will do very well. 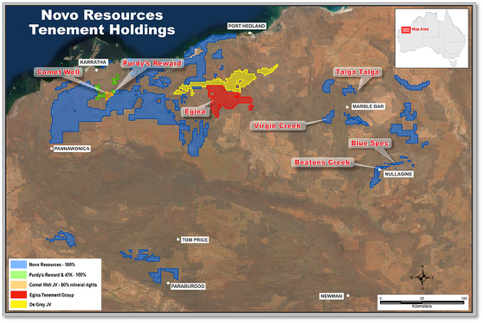 Bob Moriarty: They're moving right along. Quinton has been very quiet about Novo Resources. We know that he's trying to do a deal on the Millennium Mill. Millennium was very poorly run, very poorly managed. I wrote about that years ago and said so. They went into bankruptcy. Their main creditor has taken control of the mill. It costs them $30,000 a day to keep the electricity turned on. So I think there's a lot of incentive for the creditor to do a deal with Novo, and it would turn Novo into a producer, literally immediately.