Agnico is acquiring the stake by subscribing for 25.8 million units of a private placement priced at C$0.239.

It’s a good deal for Maple, with Agnico also funding C$18 million in exploration at the projects over a four year term — including C$4 million in the first year.

Agnico is also contributing its technical team via joint operatorship.

Interestingly, each party will be granted a 2% net smelter return royalty (NSR) that can be bought by the other for a total consideration of C$40 million.

That C$40 million per 2% NSR should open some eyes given Maple Gold’s entire market capitalization has been below that amount for some time.

Maple Gold shares were up 35% on the day to 52-week highs after the deal was announced. 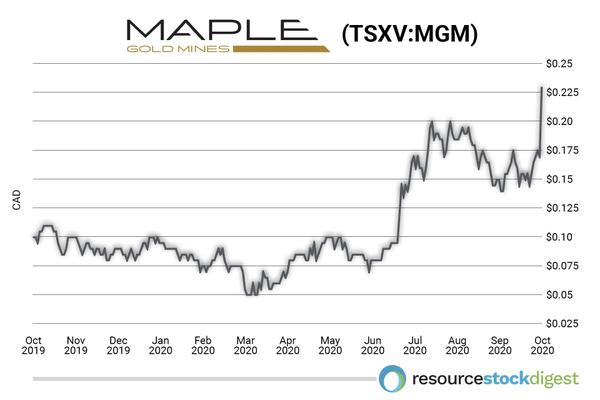 With a major backer and a large exploration budget, not only will more investors eyes on it, but there will be more news to come.

Some of that news could be very exciting, with Maple and Agnico jointly financing a half million exploration for volcanogenic massive sulphides at Douay.

So keep an eye on Maple Gold as it starts to explore and build gold resources at Douay under this new partnership.

And click here to see how we’re positioning for 10-baggers in this gold bull market.

Mike Fagan has mining in his blood. As a teenager he staked countless gold and silver properties in Nevada alongside his dad Brian Fagan, who created the Prospect Generator model that’s still widely used today in the resource space. One of those staking projects was put into production by a major Canadian mining company — a truly rare and profitable experience. That background uniquely qualifies him as a mining stock speculator. One of the most well-known names in the business, Mike is now putting that experience to use for the benefit of Resource Stock Digest and Hard Asset Digest readers.