Bullfrog Gold (CSE: BFG) David Beling on the Team, Resource and Exploration Potential at the Bullfrog Gold Project in Nevada

Gerardo Del Real: This is Gerardo Del Real with Resource Stock Digest. Joining me today is the President and CEO of Bullfrog Gold Corp. (CSE: BFG)(OTC: BFGC), Mr. David Beling. Dave, how are you this morning, sir?

David Beling: Very well, Gerardo. How are you?

Gerardo Del Real: I am well. I must admit that Bullfrog is a story that is new to me. It was brought to my attention by Outsider Club founder and co-owner of this website, Mr. Nick Hodge, who I believe recently helped raise some money for you, and I believe he participated himself. But I say all that to say that the more I dug into it, the more I really looked forward to helping tell this story because it checks a lot of boxes for me; the team, the project, the fact that you have a resource and near-term catalysts. We'll talk about all of those. First and foremost, can you tell us a bit about yourself and your background? Because it's pretty impressive.

David Beling: I'm a registered professional mining engineer from University of Arizona. This year, I'll be in the business 56 years. I've spent quite a bit of time in copper, uranium, gold and silver, as well as cobalt and nickel. I've been involved with developing several gold heap leach projects, including the Hycroft Resources project in northwest Nevada. I finished construction on that in the late '80s and ran it for 5 years.  So I've been around the block.

I've also developed several corporations doing IPOs, bank financing, offtake agreements and so forth. So yeah, I've got over half a century of experience, including permitting. In fact, I developed, or at least championed, the issuance of the first EIS for a mine in the State of Arizona. The only thing I haven't done in this business is smelting.

Gerardo Del Real: Okay. Well, that's a heck of a background. And frankly, you're being modest. I know that you've engineered and/or managed 12 open-pit mines, 9 underground mines, 14 process plants. I could go on and on. All of that is important because of the flagship, the Bullfrog project, which, as I mentioned, has a resource, but as importantly has a database that I think is literally worth its weight in gold. Tell us a bit about the project and how you came about it.

David Beling: We had an initial land position next to Barrick back in 2011 when the company was started. Since then, I've done deals with Barrick and several other companies, leases. I've staked, gosh, over 134 claims, purchased several patents and so forth. Whereas now, where we had a strategic land position next to Barrick and no ounces back in 2011, now I've got over 5,250 acres of patented and unpatented claims.

We do have a 43-101 resource estimate of about 525,000 ounces of gold M&I at 1 gram per tonne. Plus, we've got another a hundred and some odd thousand ounces in the inferred category that we believe has very good potential for expanding the resource and specifically within existing pit plans. So there's quite a bit of build up on the land and resource there.

Besides getting potential for expanding the pits that Barrick mined, we also generated a new exploration target that's one mile east of the main Bullfrog pit. That area has the identical host rocks as the Bullfrog deposit. It's got gold on the surface, it's got structures in it. The only thing this target does not have is drill holes in it. And here just early this month, we put the first two holes in what we call the Paradise Ridge target. I don't have the assays on it and don't expect them for a couple more weeks, but we did 25 holes. Most of them were around the Montgomery-Shoshone and Bullfrog pits plus two in this Paradise Ridge target. I announced the results of the first 6 holes here just a week ago or so. 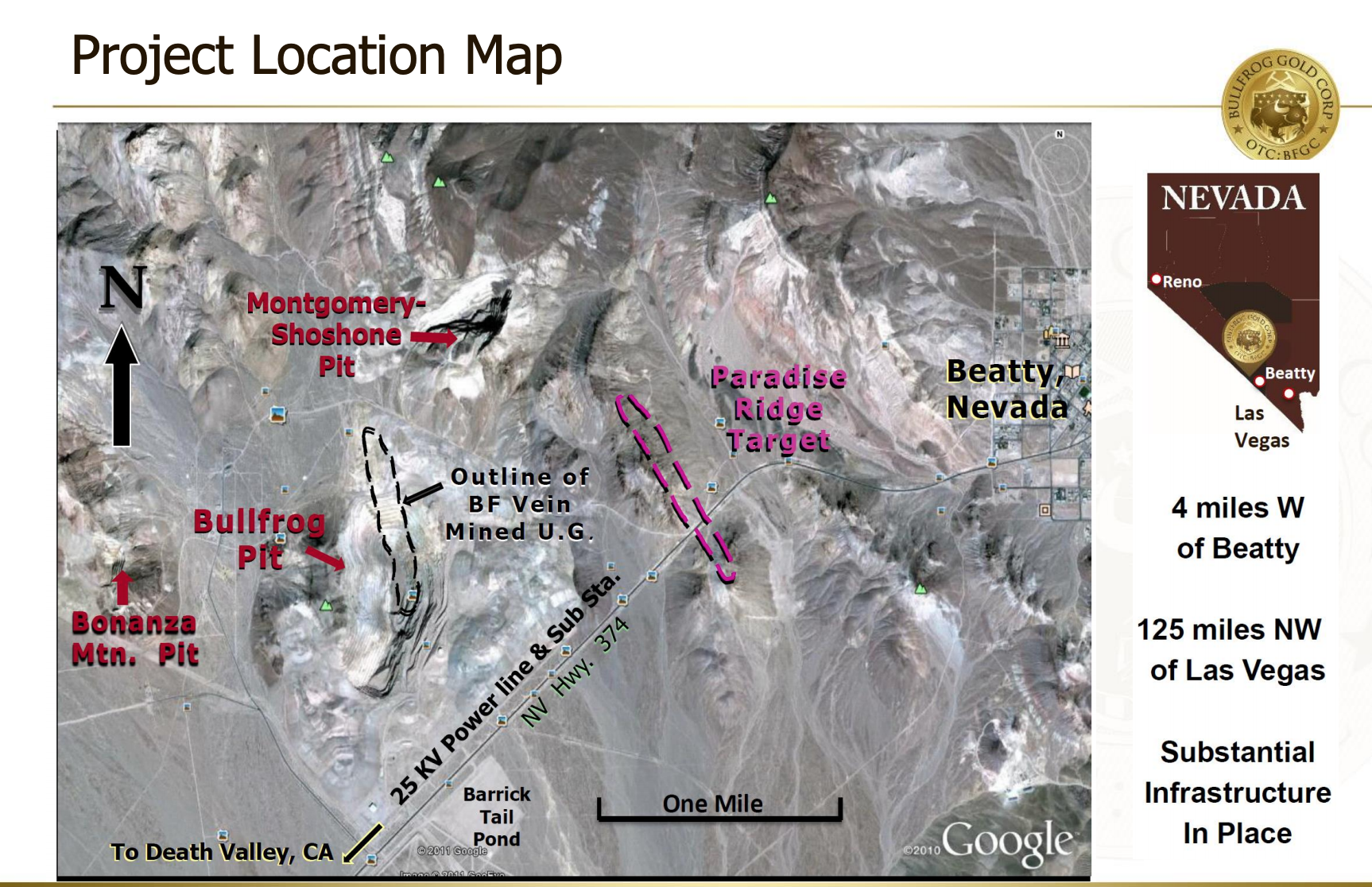 So that's how this project has come up to where it is now. We're quite enthusiastic with what we have. We have a two-pronged project here. We have two existing pits that we believe will become mines plus we have exploration potential. So we're focusing on both of these things and doing it concurrently.

Gerardo Del Real: Well, you're also in the right address. You're right next to what was Northern Empire's project before it was acquired for $90 million US in October of 2018. That's a project I actually visited and was doing due diligence on right as the offers were coming in.

Can you speak to your proximity to several majors and peers? Because I have to believe just in looking at the list that you have likely the smallest market cap of anyone that's near your address.

David Beling: Well, that's correct. We've got the heart of the Bullfrog area that Barrick mined. They produced 2.3 million ounces out of this area. I own or control the northern third of the Barrick Bullfrog pit. And also I have the entire Montgomery-Shoshone pit that Barrick mined. But gosh, over the past several years, AngloGold has taken a position from Renaissance and actually they just exercised the $3 million option and they've staked additional claims. They've staked claims up to the northwest of our main claim boundary. So has Kinross Gold and so has Corvus Gold. So there's a lot of big players. And as you mentioned, Coeur took over Northern Empire.

So there's a lot of big players in the area. This is actually one of the hottest gold exploration plays in the United States, if not North America. 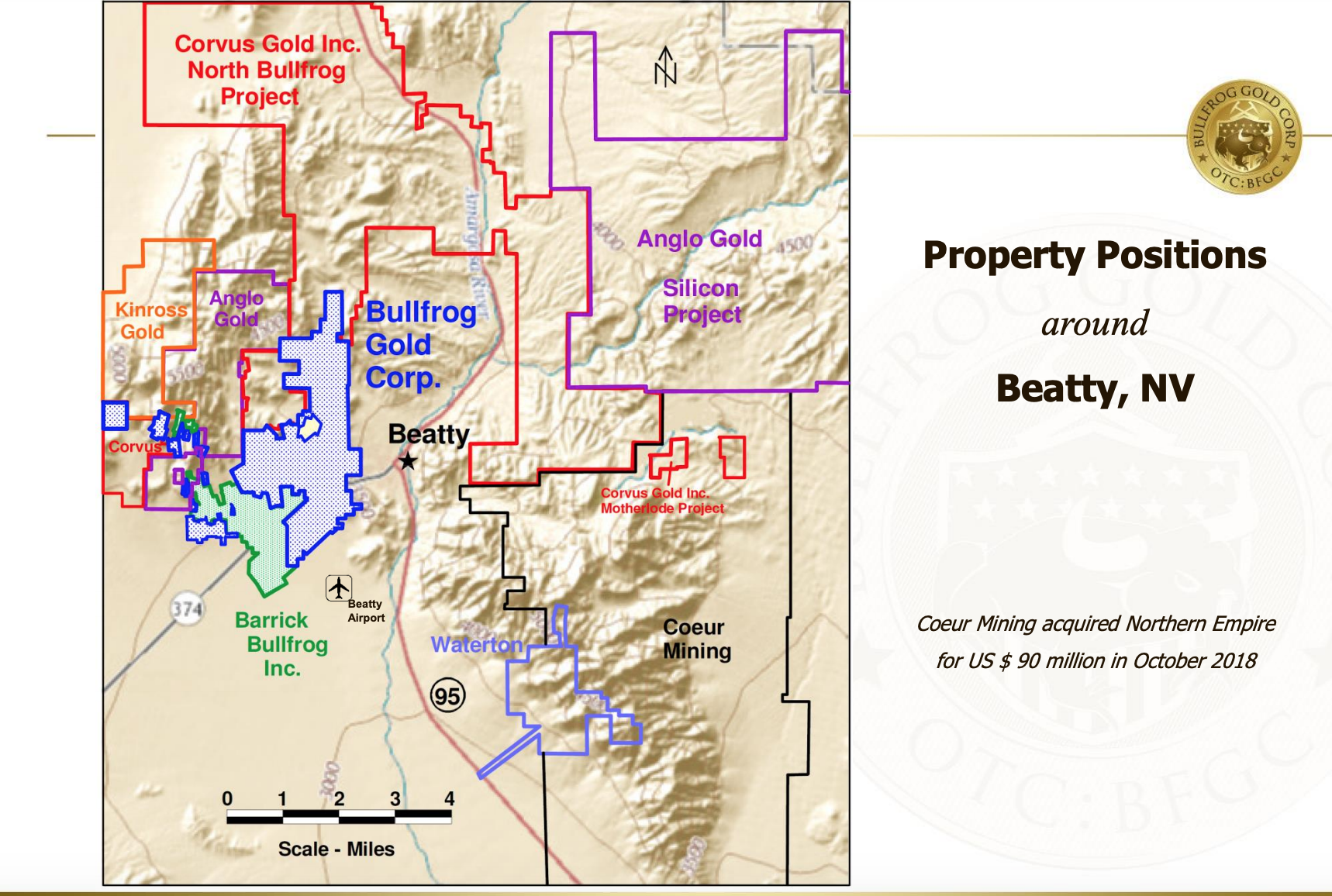 Gerardo Del Real: Agreed. You have a vested interest in making this work, right? Can we talk a bit about management ownership and insider participation? I like to see management teams with skin in the game. You definitely have that. What does that look like, Dave?

David Beling: Well, I'm the largest shareholder. I've got 30 million shares and I'm the largest creditor. I carried this company out of my own wallet for three years when gold was a lot less than it is now. I tell everybody, my wife thinks I'm crazy, but that's not a recent occurrence. But, in any event, my objectives are totally in line. And there's not that many CEOs that have that kind of ownership in the company. So I definitely believe in this, or I wouldn't have put my own money where my mouth is. I think that's a big deal.

And, of course, the rest of our directors, we've got two other directors, Alan Lindsey and Kjeld Thygesen. We've each known each other for over 27 years. They've been in the business, Kjeld in the business for over 48 years. And Alan's been in the mining business for over 26 years. So we've got a well-seasoned board and we've got several consultants and other people that contribute to the entire team here. We have a lot of contacts that we can draw on as we expand our exploration and development activities.

Gerardo Del Real: You mentioned that you had assays pending. Can we talk about that a bit? You expect those within the next couple of weeks. Did I hear that right?

David Beling: Yes, there were basically three batches. The first batch had 6 holes and I've already disclosed that. The next batch of assays is around 14 holes. I don't know that I'll receive them all together, but I should have at least some of those here within the next week. Of course, the third batch, we just finished drilling on June 6th. I think there were six holes in that batch, so we'll see that probably in early July. So we've got news coming down the pipeline and we're looking forward to analyzing that and developing what the next drill program can be.

Gerardo Del Real: You mentioned the resource that already exists, which is obviously a great anchor for the market cap. Can you tell me where the market cap is today?

David Beling: Well, right now we've got about 157 million shares out of common. We also have 20 million preferred that are readily transferable to common at parity. We're at a market cap currently at about $24 million, including both common and preferred. So that's where we're at. We're obviously undervalued. In fact, when you look at our market cap per ounce of gold of M&I resource in the ground, we're looking at about less than $40 an ounce, and many peer companies are $100 or more. So there lies the opportunity in Bullfrog Gold.

Gerardo Del Real: Let's talk about the database that I mentioned, because I understand that you have over 250,000 meters of drilling data. I got to believe that's helped refine targets moving forward. I know that played a large part in you being able to establish this resource, right?

David Beling: That's right. We copied all of Barrick's drill hole files. In mileage it was 155 miles of drilling. We've analyzed every single hole out there, in some cases many times, and extracted everything that we could on generating exploration targets. That drilling also supported an independent 43-101 resource estimate that was done back in 2017. Barrick's geologists were as good as anybody's. That information satisfied Tetra Tech as far as their due diligence on supporting that type of 43-101-compliant resource. So that database is huge.

We've got access to all of their data. I've been to their Elko and Salt Lake offices and looked at everything that was relevant at the time. But ultimately, when we exercise our option to purchase those lands, we'll acquire that information and store it in our own facility. But it's a huge database. And the biggest value, obviously, was the 155 miles of drilling. In fact it would cost you $45 million or more to recreate that drill database.

Gerardo Del Real: How is the infrastructure, Dave?

David Beling: Gosh, it's located 4 miles west of Beatty, Nevada. A paved highway goes right up to the front gate. You've got water under the Bullfrog pit. There's a power line on-site and a substation site that Barrick used. These pit walls have been standing at 53 degrees for over a quarter of a century, over 25 years. The original deposit had 2% or less sulphides in it and the bulk of that has been oxidized thoroughly, so you don't have any acid mine drainage. The pit ramps are already in.

Gerardo Del Real: Dave, we like to be selective with the stories we help tell. This is one I'm excited to get involved with. I want to thank you for your time. And I'm hoping that you can make some time for me here in the next coming weeks as assays come in.

David Beling: Well, the bottom line is this here frog is about to leap.

David Beling: Thank you so much.