Millrock President & CEO commented: “Millrock has made some strong advancements through 2019. We believe that 2020 will be a watershed year for the Company, and we are particularly excited to begin exploration work in earnest at the 64North Gold Project. We will begin with a drill program at the compelling Aurora Target located immediately west of the Pogo Gold Mine in Alaska.”

Initial drilling at the Aurora target on the West Pogo Block of the 64North Gold Project is scheduled to begin in early March 2020. Earn-in partner Resolution Minerals Ltd., (“Resolution” ASX: RML) reported yesterday in a press release that it had successfully raised A$4.5 million to fund the planned work. The initial program will consist of four or five holes totaling 2,000 meters and will test the Aurora target. The target area is located within sight and approximately 2.5 to 3.5 kilometers west of Northern Star’s Pogo Mine. Northern Star reports an endowment of approximately 10 million ounces of gold at Pogo. (3.8 million ounces mined at 13.8 grams per ton gold (“gpt Au”), 1.5 million ounces reserves at 7.5 gpt Au included in a resource of 5.95 million ounces at 9.5 gpt Au, as reported by the ASX-listed company in an August 1, 2019 press release. The reserves and resources reported on are not on Millrock’s ground and Millrock has not independently verified the numbers reported by Northern Star).

More recently, Northern Star has reported the discovery of the Goodpaster gold deposit northwest of the mine, even closer to the mutual Millrock – Northern Star claim boundary and the Aurora target. The Aurora target is a 1.5 by 4.0 kilometer long zone of low-magnetic rocks adjacent to a late diorite intrusion. The setting is very similar to that observed at the Pogo Mine.

Millrock postulates that the late diorite intruded along a westerly extension of the Liese Creek fault, which is known to have played a key role in the genesis of the Pogo gold deposits. Highly anomalous gold-bismuth-arsenic in soil is documented. High-angle gold-bearing quartz veins have been intersected by prior drilling, however, the few holes drilled by earlier workers did not go deep enough to intersect the low-angle shear zone that is known to host gold at Pogo and the Goodpaster deposit. Millrock believes this structure exists at the Aurora target. From a recent CSAMT survey it appears likely that a favourable shear zone is present below surface. Drilling will begin at the east end of the target. The various attributes of the target are shown on the following compilation map.

Figure 1 accompanying this announcement is available at https://www.globenewswire.com/NewsRoom/AttachmentNg/52628b70-3a4e-46c8-a1ef-f440786864db

Resolution can earn up to a 60% interest in the 64North Gold Project through exploration expenditures of US$20 million, payment of US$200,000 cash and issuance of 38 million Resolution shares. The minimum commitment for 2020 is US$5.0 million. Other details of the agreement between Millrock and Resolution are documented in Millrock’s announcement made on December 16, 2019.

Millrock has signed an agreement with Northway Resources (TSX-V: NTW “Northway”) concerning its Napoleon gold exploration property in eastern Alaska. Millrock previously held claims in this area and owns geological and geochemical information concerning the project. Millrock has sold an exclusive copy of the information to Northway. In return, Northway has granted a 0.5% Net Smelter Returns royalty to Millrock on the Napoleon claims, and any claims Northway may acquire in a prescribed area of interest surrounding Northway’s current claim block.

In an announcement made by Millrock on September 23, 2019, First Quantum Minerals Ltd. was granted an exclusive right to enter an option to joint venture agreement concerning the Dragonslayer copper-gold prospect, a key area of Millrock’s larger Chisna project. A program of stream sediment and soil sampling was carried out in September 2019. Sampling conditions proved difficult, with low gradient streams and thick overburden with extensive organic cover. Despite the poor sampling conditions, anomalous values of copper and pathfinder elements were returned. The work did not clearly demonstrate that a porphyry copper deposit is present; the results are inconclusive. Further exploration work is warranted. However, First Quantum elected not to exercise its exclusive right. Millrock will seek out other funding partners.

Millrock has announced that it will raise $1.0 million in a non-brokered private placement financing. Existing Millrock shareholders are being given priority. Proceeds of the financing are to be used primarily to acquire early stage gold projects in the Alaska portion of the Tintina Gold Province.

Figure 2 accompanying this announcement is available at https://www.globenewswire.com/NewsRoom/AttachmentNg/0b09b164-738e-428b-ad39-3e2da6d676a0

Qualified Person
The scientific and technical information disclosed within this document has been prepared, reviewed and approved by Gregory A. Beischer, President, CEO and a director of Millrock Resources. Mr. Beischer is Certified Professional Geologist (American Institute of Prefessional Geologists CPG#10505, BSc. (Honours) Laurentian University, 1987) and a Mining Engineering Technologist (Hailerybury School of Mines, 1981) and is a qualified person as defined in NI 43-101.

Some statements in this news release contain forward-looking information (within the meaning of Canadian securities legislation) including, without limitation, management’s expectation that it will form an exploration agreement after the due diligence period, receive funding from N27, enter a Shared Use Agreement, complete installation of a drill trail and water well during 2019, and to begin a drilling program in the first quarter of 2020. These statements address future events and conditions and, as such, involve known and unknown risks, uncertainties and other factors which may cause the actual results, performance or achievements to be materially different from any future results, performance or achievements expressed or implied by the statements. Such factors include, without limitation, Millrock’s ability to raise funds needed to perform additional exploration on the claims staked and customary risks of the resource industry. 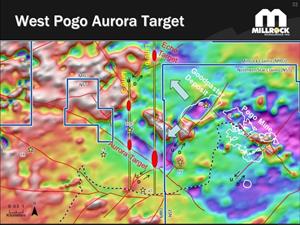 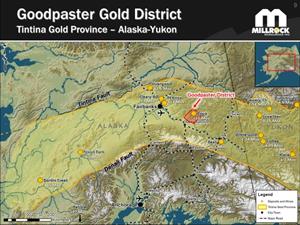