Uranium Energy: The Potential Tariffs And Higher Production Potential Could Turn Things Around

Although the industry related headwinds have had made it difficult for Uranium Energy Corp. (UEC) to improve investors' confidence over the past couple of years, the improvement in future fundamentals is making it a good bet for value investors. This is because of the potential tariffs from United States on imported uranium. The probability of supply quotas for domestic producers is adding to future fundamentals and traders sentiments. 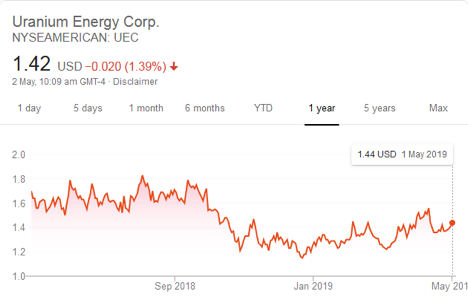 The improvement in confidence is also evident from the latest uptrend in its share price. The stock has recently witnessed a sharp increase from the 52-week low price of $1.12 that it had hit at the end of last year.

The Potential Tariffs on Imported Uranium

Investor's sentiments started turning bullish due to some hints of improving demand and declining supply in the United States. This is because US president Donald Trump is likely to decide in the 90 days whether it is good to impose tariffs and quotas on imported Uranium.

We believe that President Trump will recognize the danger of relying on large and increasing levels uranium imports from Russia, China, and our geopolitical rivals," said Curtis Moore, a spokesman for Energy Fuels.

The commerce department last month delivered its findings to the White House regarding the implications of imported tariffs and its impact on the domestic industry. The petition from two domestic miners actually demands restrictions on imported uranium along with forcing nuclear power companies to source 25% demand domestically.

The United States produces close to 3m lb of Uranium, but it consumes about 49m lb a year of the radioactive material.

Are the Tariffs Providing New Life to Domestic Uranium Industry? The price of Uranium is unlikely to increase amid the potential tariffs from the United States. In fact, it could increase global supplies because the United States is the biggest consumer - with more than 100 nuclear reactors.

Uranium, u3o8 restricted price continued to fall over the past few years amid increasing supplies and declining demand. 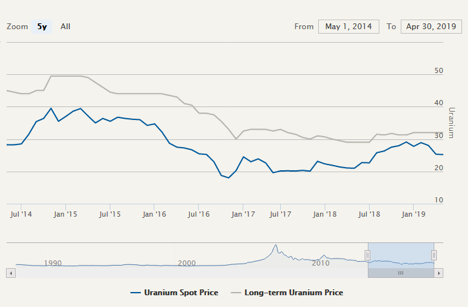 Utilities are the biggest contributor to declining demand as they are moving away from nuclear. Meanwhile, utilities across the United States are shutting existing plants from Wisconsin to California because they feel pressure from cheap fracked gas and emerging energy sources like renewable.

Only Higher Volumes Could Allow Uranium Energy Corp. to Come Out of Losses

Although Uranium Energy Corp. has significantly slashed its cost structure over the years to support margins, the company isn't in a position to offset lower prices.