The uranium market has been in a long dormant period, but one Canadian company has used the opportunity to pick up assets. 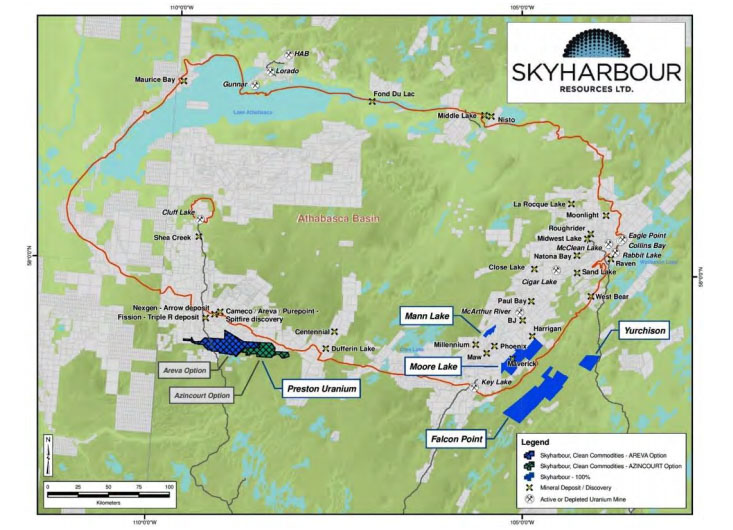 The uranium market has lain largely fallow in the aftermath of Fukushima as reactors shut down and uranium prices tumbled from $70/lb to a nadir of $17.75/lb. Scores of juniors bankrupted; majors closed highly productive mines to await more propitious days, meaning the ability to mine uranium profitably. In commodity markets, patience is a virtue since what goes down must come up as economic forces equilibrate supply and demand.

Spot market prices for uranium are nudging toward $30, but experts agree that cost-effective mining of the heavy metal globally awaits a price of more than $50/lb.

In an interview with Streetwise Reports, Trimble listed several reasons why Skyharbour Resources chose to take advantage of the downturn in uranium prices by acquiring high-quality Athabasca Basin projects at bargain basement values.

"During the next decade, global electricity consumption is predicted to rise by 76%. If we are serious about limiting greenhouse gases, then generating carbon-free electricity with nuclear reactors is a must," Trimble said.

"What's the point of driving a Tesla if you are fueling it with electricity generated from burning coal?"

Trimble explained that the low cost of production in uranium-rich regions such as Kazakhstan has caused the U.S. nuclear reactor industry to import the fuel, further extending the dormancy of the North American uranium mining sector.

But demand is clearly poised to rocket up. "Right now, there are 448 operable reactors, 57 under construction and over 500 ordered, planned and proposed," Trimble said. "China is leading the charge, with India and other developing countries building apace. The United States currently has 98 reactors to fuel, and a climate-aware energy policy will dictate building more plants on the road to energy self-reliance."

Trimble points out, "Historically, approximately 80% of uranium market trading has been done though long-term contracts, many of which are terming out and will have to be renegotiated at new prices and terms." That means that previously "covered supply" will become "uncovered" and nuclear utilities will be forced back to the market to purchase uranium. "As global energy producers compete to contract for long-term sources, global prices will be forced to equilibrate to the increasing demand for clean, baseload, reliable and affordable energy," he remarked.

There is another game-changer in the works. The Trump administration is currently reviewing the still-secret conclusions of a Section 232 Department of Commerce (DOC) investigation into whether Kazakhstan, Russia and Uzbekistan are flooding the U.S. market with ultra-cheap, state-subsidized uranium product. Energy Fuels and UR Energy are seeking price relief in the form of a quota system that would require U.S. utilities to purchase 25% of their U3O8 from domestic producers, which amounts to approximately 12 million pounds of U3O8.

"There are obvious national security implications posed by an addiction to uranium produced in countries that are not U.S. allies," Trimble said.

Trimble explained, "The DOC investigation has pushed American nuclear utilities to the sidelines effectively forcing the largest buyer of uranium globally out of the market recently. Once there is some clarity for U.S. utilities on this matter, they will be back in the market, which should help to drive higher uranium prices. Furthermore, the reality of the situation is that if the quota is mandated, it could take six years for U.S. producers to ramp up production, not to mention that if it's deemed a national security concern to rely so heavily on Russia and Russian satellite countries to provide a large portion of the uranium that fuels one in five homes in the U.S., who stands to potentially benefit? Canada can be that dependable source of long-term supply from a reliable ally."

Skyharbour Resources acquired its six Athabasca Basin uranium projects with just over $4 million in cash and stock. Skyharbour Resources owns 100% of its flagship, high-grade Moore Uranium Project, completing an earn-in with Denison Mines Corp. (TSX:DML; NYSE.MKT:DNN) in August 2018. Denison is a large strategic shareholder of Skyharbour's, and its President and CEO David Cates sits on Skyharbour's Board of Directors. Moore, located on the southeastern edge of the Athabasca Basin, consists of 12 contiguous claims totaling 35,705 hectares. Over CA$40 million has been invested in 140,000 meters of diamond drilling with over 380 holes. The primary focus is the high-grade and relatively shallow Maverick Zone.

Skyharbour Resources reports that upcoming company catalysts for 2019 include additional drill results as well as a maiden mineral resource estimate at the Moore project. The Main Maverick Zone is confirmed to be high-grade with a highlight results of 6.0% U3O8 over 5.9m including 20.8% U3O8 over 1.5m in hole ML-199. Furthermore, Trimble stated, "only 2 kilometers of the 4 kilometer Maverick corridor have been systematically drill tested, leaving robust discovery potential along strike as well as at depth in the underlying basement rocks where notable recent high-grade discoveries have been made like NexGen Energy’s Arrow Deposit and Fission Uranium’s Triple R Deposit. Skyharbour is looking to emulate the success of these other companies by drilling for basement-hosted, high-grade uranium mineralization at Moore."

Industry experts at Caesars Report are impressed that Skyharbour Resources has strategic partners to shoulder exploration costs to advance the company’s secondary projects—a strategy known as "prospect generation." In March 2017, Skyharbour partnered with other companies to explore its Preston and East Preston projects on the west side of the Athabasca Basin.