Copper has long been an excellent proxy for global economic health. It’s used in everything from washing machines to electric cars.

That’s why copper is often referred to as “Doctor Copper” – because it can diagnose the health of the market.

There’s been a lot of market sentiment that the bottom has been put into copper, and that 2020 is the year of the metal rat.

I’m long term bullish on copper, but I stated publicly in late 2019 that caution was required in the near term.

Rewind just over 12 months ago when we wrote about the potential of a copper wipeout. That research piece was one that got an insane number of eyeballs.

Many copper stocks have been taking it on the chin lately, just as they did in 2018. Copper itself ended up hitting a 2-year low of $2.51 early last Fall before trying to make a rally back to $3/pound, which failed. Now it’s back to last Fall’s lows.

In my ‘Copper Wipeout’, report I stated that most analysts that were bullish on copper had two major errors in their models.

The first error was that analysts across the board were using consensus demand side growth metrics that were too optimistic.

The second error was that analysts were too aggressive on the supply decreases, meaning they modelled overly aggressive production declines from existing mines.

I believed the “consensus” used by analysts was fundamentally flawed as the production profile declines were incorrect. The 2019 production numbers published thus far support my model – yet none of the analysts are updating their models. 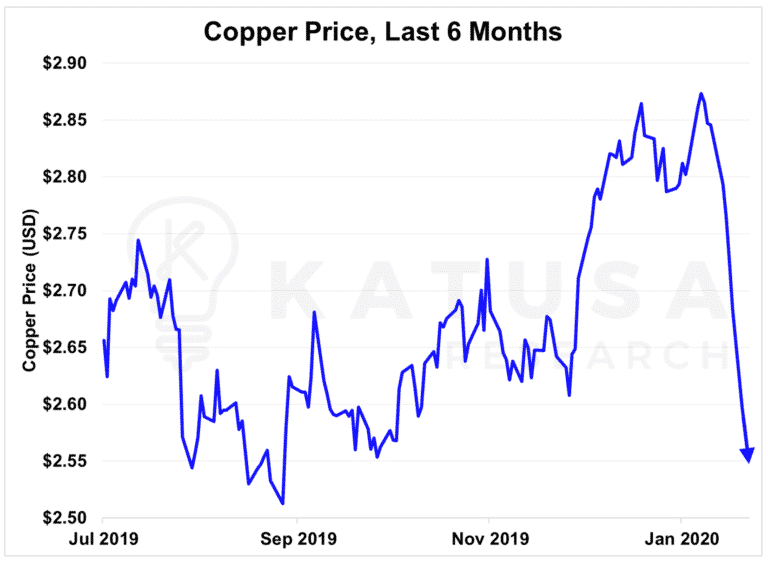 This past week, copper prices took a 12% nosedive, and things might get even uglier from here.

Doctor Copper – A Casualty of the New Flu Pandemic

If you’ve been paying attention to the news, then you probably already know about the Wuhan Coronavirus.

Officially named the Novel Coronavirus, this latest flu belongs to the same family of viruses as the SARS and MERS infections of 2003 and 2012.

With the first case occurring in the Chinese city of Wuhan last December, the virus has since spread worldwide. The Chinese New Year, which took place on January 25th this year, intensified the problem with its large influx of travelers looking to celebrate the New Year with family.

As of earlier this week, there have been more cases of this new virus detected in China than there were of the SARS epidemic. The WHO (World Health Organization) held emergency meetings to discuss the outbreak.

It’s unclear at the moment exactly how bad things will get. But one thing is certain… the Chinese economy isn’t getting out of this one lightly.

Due to the coronavirus situation, China’s central government has extended the Chinese New Year holiday by three days.

In addition, certain provincial governments have instructed corporations to delay restarts by an additional 7 days.

Flights to China have been stopped. Production plants are halted. And there are rumors of Chinese manufacturers declaring force majeure and canceling contracts from commodity suppliers. The 12% drop in copper over the last week confirms this.

All this led a Chinese government economist to predict that the country’s growth rate for the quarter may drop from 6% to 5% – or even lower.

And as the chart below shows, China’s slowing growth will have a significant effect on global copper demand. Over the past 5 years, China has averaged out to a little over half of the total global demand for copper. 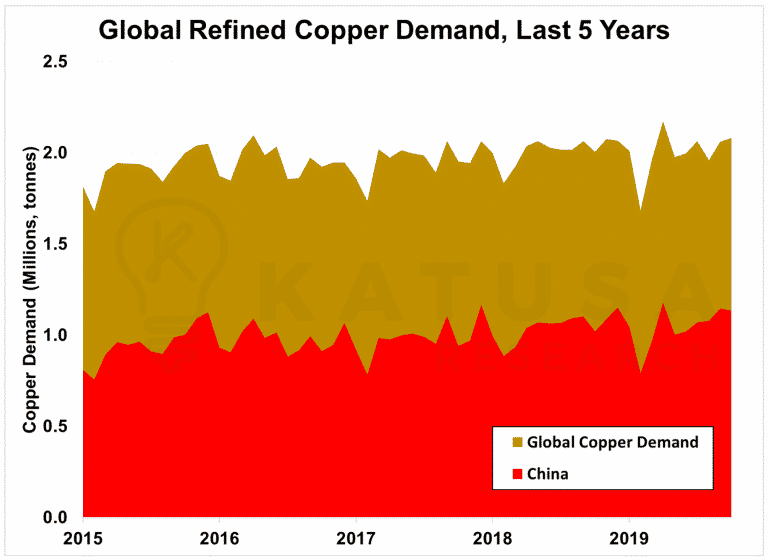 Fears over the virus are keeping the Chinese economy down. And just like the doctors lending a helping hand in Wuhan, Doctor Copper is feeling the pressure.

This isn’t the only thing that’s currently impacting copper prices, though it’s certainly the most significant…

Chile and Indonesia are also in the spotlight, as far as copper goes.

Organized strikes by labor unions at several of the country’s mines caused multiple shutdowns and delays during 2019. It’s a very real risk that more unrest in Chile could impact global supply, but that fear is already priced into the copper market.

The second wildcard in the copper market is Grasberg, Freeport McMoran’s mine in Indonesia.

Freeport has been battling the Indonesian government for years, and it’s losing the battle. Grasberg is expected to produce 350,000 tonnes of copper in 2020 making it a top 10 copper producer in the world. The Indonesian government will continue to play hardball and Grasberg’s copper production will be impacted. But again, that’s all known and already priced into the copper spot price.

My caution on copper in the short term was rewarded.

Further weakness in copper could make 2020 a great buying opportunity to pick up quality copper companies at big discounts to their intrinsic value. But the time isn’t ripe just yet.